Can you really capture carbon dioxide and remove it from the atmosphere? An informative piece on what carbon capture, storage, and utilization is and its use in combating climate change. 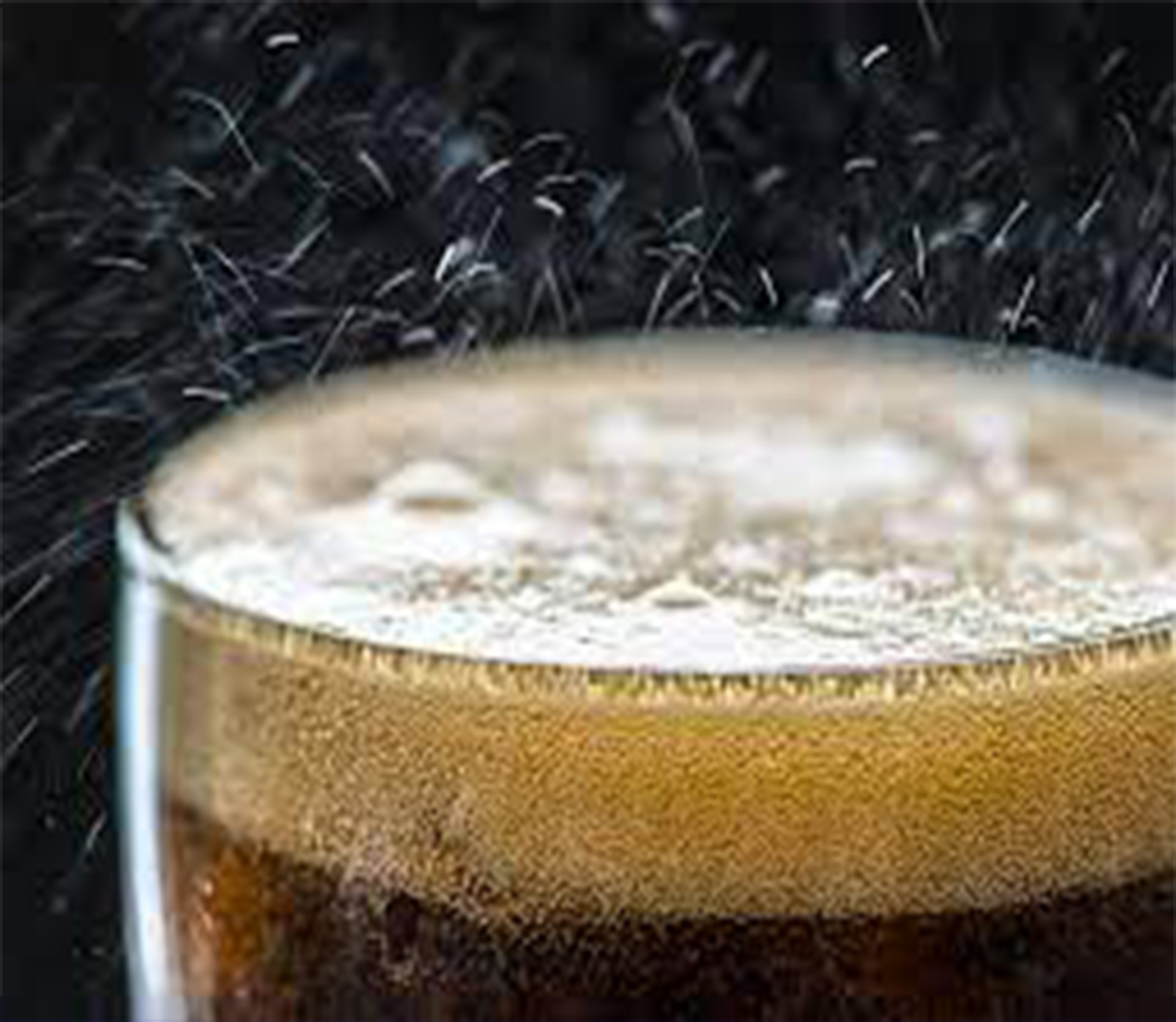 What is Carbon Capture and Storage? How Does it Work?

CCS involves 3 steps: capturing the carbon dioxide produced by power generation or industrial activity; transporting it from where it was produced; and storing it deep underground in geological formations.

During the capturing phase, carbon dioxide should first be separated from other gasses produced in industrial processes. This is followed by a compression step, where the carbon dioxide is compressed and deeply chilled into a fluid. By compressing gas into a liquid, its volume is decreased exponentially, making it much more effective to transport. The carbon dioxide is then transported through ship, road transportation or in a pipeline and, as a final step, the carbon dioxide is stored, for example, by injecting it into rock formations for long-term storage. 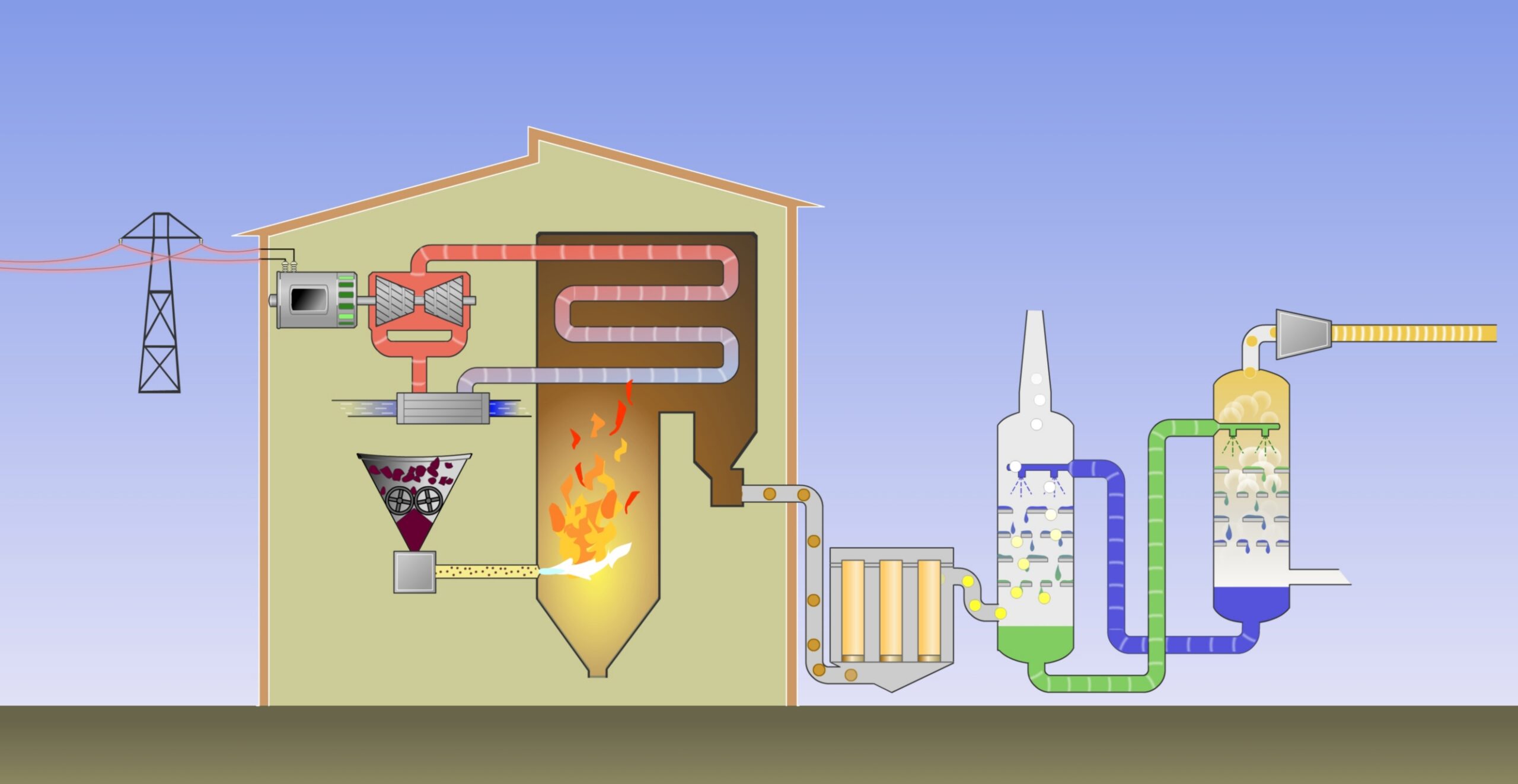 A number of methods have already been explored for the permanent storage of carbon dioxide, including geological storage, mineral-based storage, ocean-based storage, or by using carbon dioxide degrading algae or bacteria to break down the carbon dioxide. Out of the methods mentioned, geological storage is currently the most promising due to the previous experience by the oil and gas industry. This method of storage involves storing carbon dioxide either in gas or liquid form by injecting it into depleted oil and gas reservoirs, unmineable coal seams, or saline aquifers at depths between 800 and 1000 m.

Mineral-based storage involves reacting carbon dioxide with metal oxides such as magnesium and calcium oxides, to form carbonates. Carbonation, also known as ‘mineral sequestration.’ can be considered as both a storage and utilization option, depending on the application of the carbonates. If the carbonates are used as material in the construction industry, for example, it is no longer considered a storage option and forms part of carbon capture and utilization (CCU) technologies.

Ocean-based storage of carbon dioxide has been made illegal under the London and OSPAR conventions, since this type of storage could greatly increase ocean acidification.

What is Carbon Capture and Utilization?

In some cases, captured carbon dioxide can be used to produce manufactured goods or as materials for industrial and other processes, rather than being stored underground. This is known as carbon capture and utilization (CCU) technologies. The biggest advantage CCU has over CCS is that utilization of carbon dioxide is normally a profitable activity as products can be sold. This also eliminates the need for adequate carbon storage solutions.

Different carbon dioxide uses will lead to different levels of emissions reductions and the ultimate effects on climate change will depend on whether these uses lead to permanent sequestration of the carbon dioxide or not. In some uses, for example, in soda carbonation, carbon dioxide is released immediately upon opening and is, therefore, not considered an acceptable utilization option.

Enhanced oil and coal-bed methane recovery are also considered direct utilization of carbon dioxide where it is used to extract crude oil from an oil field or natural gas from unmineable coal deposits. Another way to utilize carbon dioxide is by converting it into useful fuels or chemicals, such as methane, methanol, syngas, urea, and formic acid. However, some of these processes can, in themselves, have some environmental impacts.

Carbonated minerals are also a valuable product that can be produced from carbon dioxide and can be used in the construction industry. Lastly, carbon dioxide can be used to cultivate microalgae used for the production of biofuels. 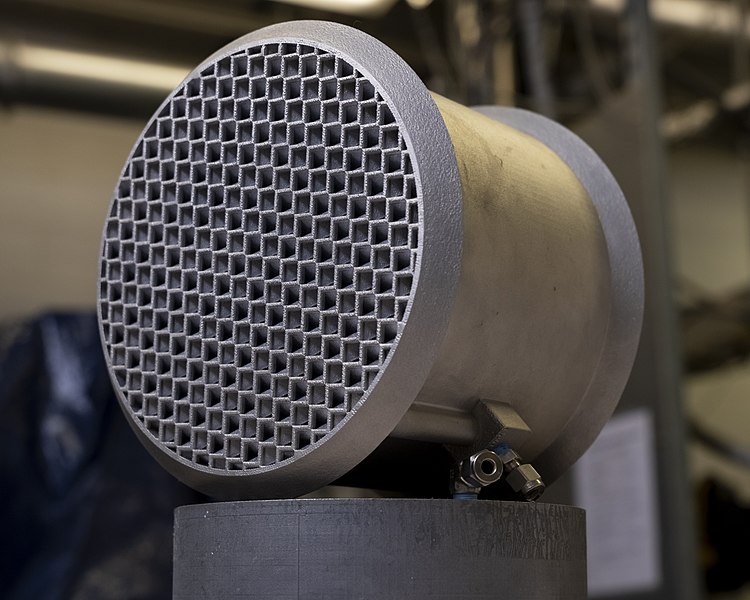 The IPCC highlighted that, if we are to achieve the ambitions of the Paris Agreement and limit future temperature increases to 1.5°C, we must do more than just increasing efforts to reduce emissions – we also need to deploy technologies to remove carbon from the atmosphere. This is where carbon capture, storage, and utilization comes in, which can play an important role in tackling global warming. 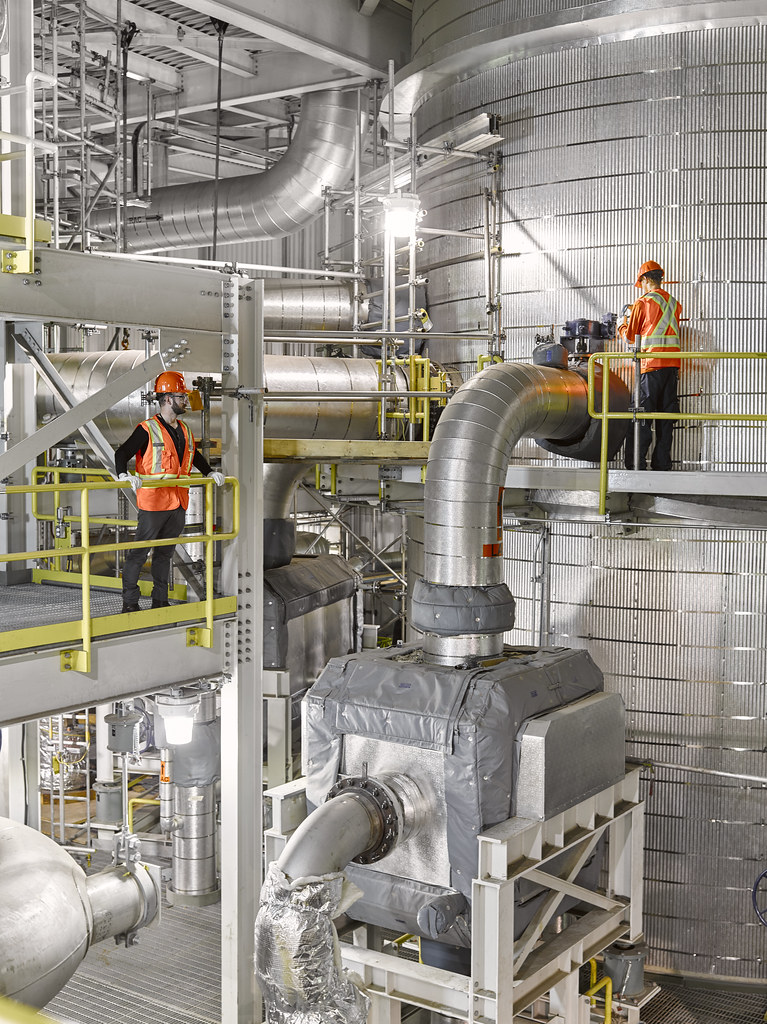 Although there are many benefits in using carbon capture, utilization, and storage technologies to reduce the amount of carbon dioxide emitted into the atmosphere, there are also several issues related to the technology and its implementation that still need to be addressed. To start with, these technologies have a high cost of implementation. Significant investment is needed for the high cost of equipment and materials to store carbon dioxide, and to build infrastructure to transport and then store it.

Although the availability of geological storage is not considered a barrier in the short to medium term, there are uncertainties with regard to the long-term ability of storage sites. It is also estimated that not all countries will have enough carbon dioxide storage capacity to properly implement the technology. Potential leakage in high concentration can also cause problems for human health, making this largely unsuitable for areas with high political instability or tectonic activity. Each carbon dioxide source must be connected to an appropriate storage site via a pipeline, which can make carbon capture, utilization, and storage implementation more difficult and expensive in areas that have no geological formations suitable for storage.

Carbon capture and storage is growing more rapidly than ever. Between 2020 and 2021, the potential capacity of carbon capture projects in development grew by almost 50%, a massive increase in a single year. However, to limit global warming to 2°C requires installed carbon capture and storage capacity to increase from around 40 Megatons per year (Mtpa) today to over 5,600 Mtpa by 2050. This translates to between $655 billion and $1,280 billion in capital investments that are needed by 2050. Rapid growth of supporting infrastructure is required by 2030 to bring more projects into the development pipeline and get them operating by 2050. 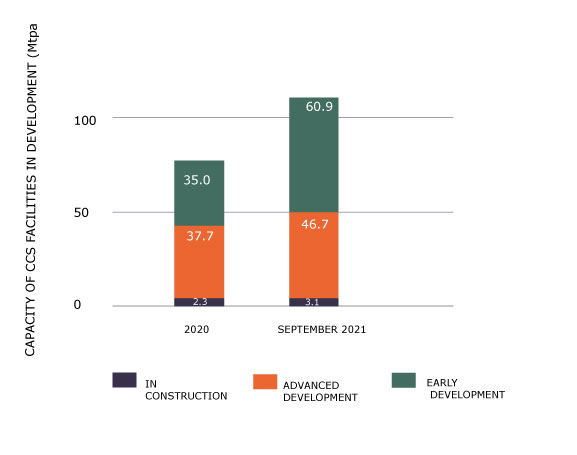 In 2020, 26 commercial CCS plants were in operation throughout the world, capturing 40 million tons of carbon, or 0.11% of total yearly global emissions. The number of CCS plants is expected to increase as the technology continues to improve. However, increasing carbon capture and storage does not mean industries should continue burning fossil fuels unabated—fossil fuels also release other harmful pollutants.

Instead, carbon capture and storage can be used to help avoid the worst effects of climate change. According to the Global CCS Institute’s 2021 Status Report, plants in operation or under construction have the current capacity to capture 40 million metric tons of carbon dioxide per year. In 2021, 102 CCS facilities were in advanced and early stages of development.

Combined with facilities already under construction or in operation, these facilities could capture 149.3 million metric tons of carbon dioxide per year. 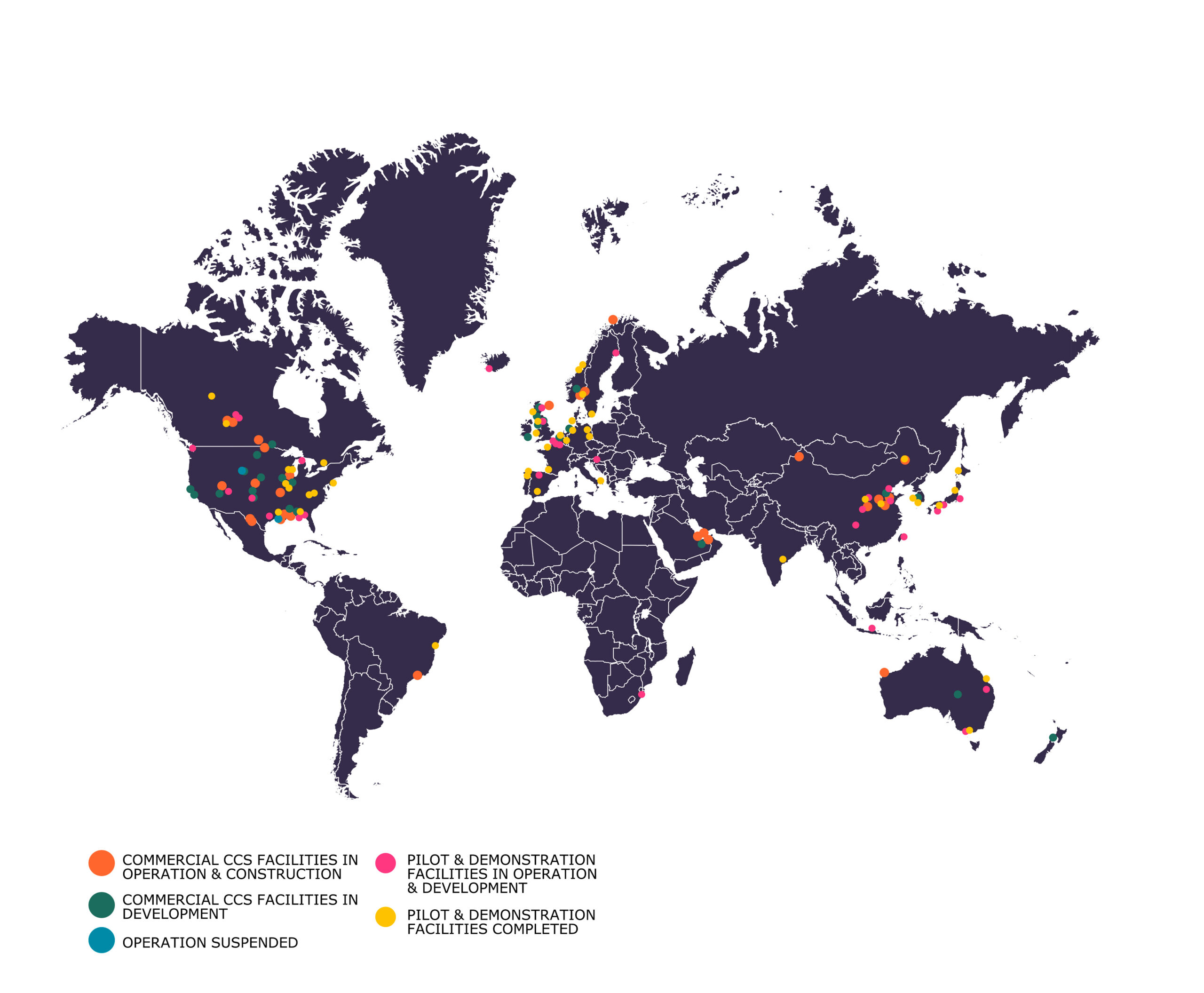 In order to accelerate the development of carbon capture and storage technologies, policies are required that increase demand and reduce costs. Several policies have the potential to reduce costs of the technology which will encourage research, development, and deployment. These include carbon pricing policies, public investment and subsidies, and clean energy standards that credit companies generating electricity or other energy sources using CCS.

Carbon pricing policies are used in several countries or subnational jurisdictions, like states or provinces, around the globe. It works by charging emitters for the tons of emissions of carbon dioxide for which they are responsible.

In the United States, multiple policies have been put in place to encourage carbon capture and storage, such as tax credits, which provides an incentive for capturing carbon dioxide and storing it. The Bipartisan Infrastructure Law was passed in 2021, with the aim of promoting and aiding carbon capture projects. The law cuts through some of the red tape for building the infrastructure necessary for carbon capture, storage, and utilization, as well as allocating funding towards pipeline construction.