Kinnuverse » Culture » A Fresh Look at Contemporary Art » What is Installation Art?

What is Installation Art?

Find out more about 3D Installation Art and Sculpture, and subgenres Found Object, Large-Scale, and Non-Representational Sculpture, plus learn about some of the movement’s key creators. 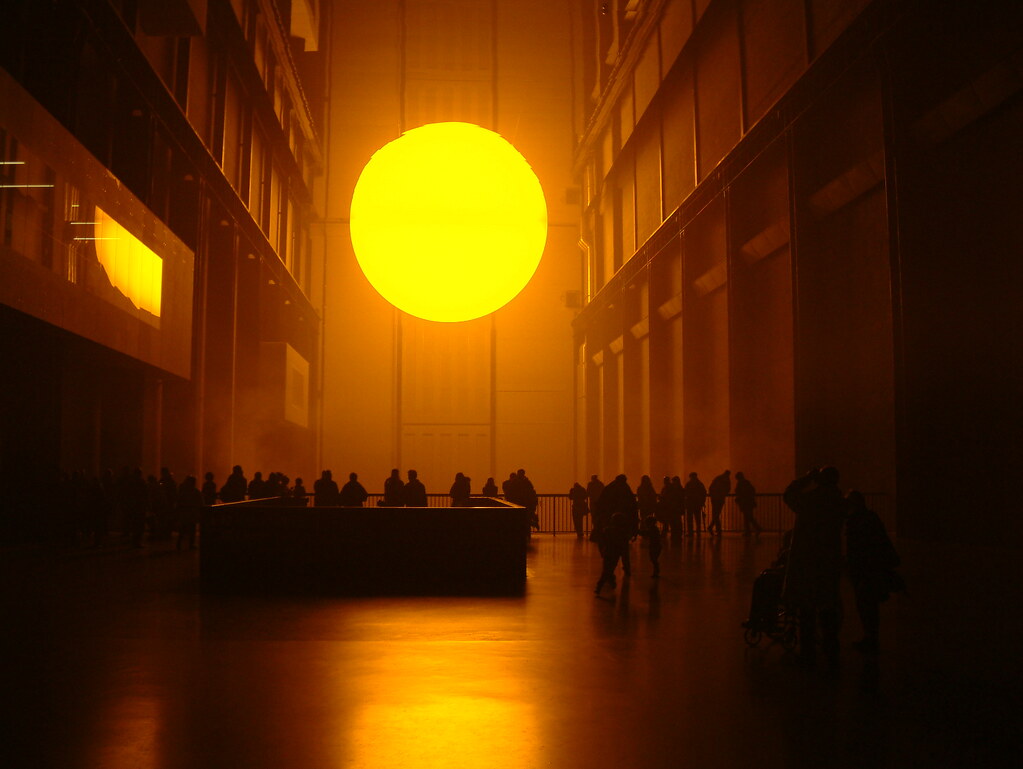 What is considered an art installation?

Installation Art engulfs the viewer in a three-dimensional experience in a specific space, evoking a mood or feeling and seeking an emotional commitment.

What are the three major characteristics of installation art?

Because of this breadth, 3D Installation art is sometimes produced by a group rather than an individual.

Although installations are typically temporary, an increasing number are permanently installed and replicated in a variety of spaces. Installation Art is also venturing away from the gallery and into outdoor, public spaces including parks, gallery gardens and even lakes.

Even though individual examples of installations may differ, the central purpose of this genre is to provide an intense experience for the viewer, and Installation Art has become one of the most widespread genres of contemporary art. 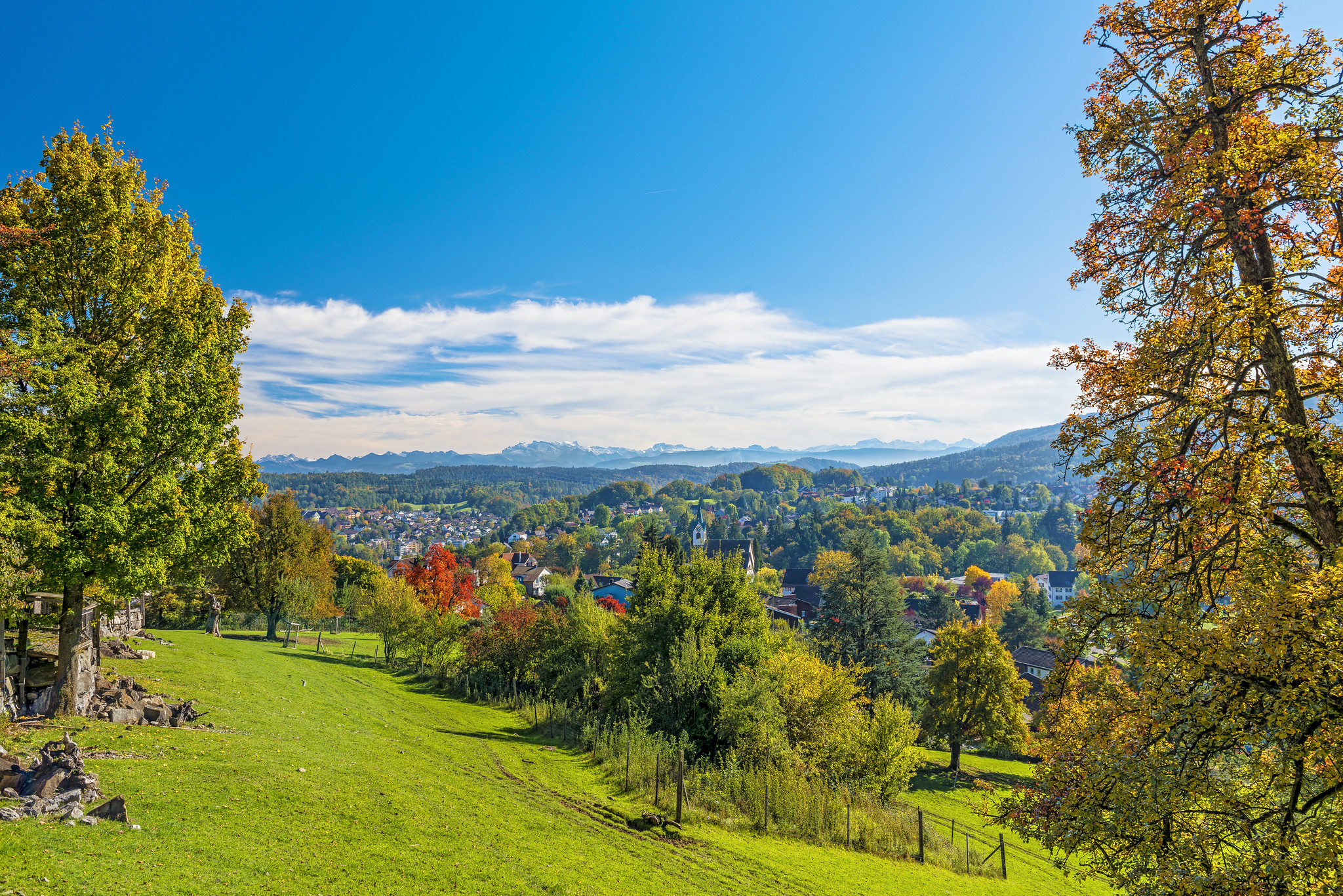 Growing out of Surrealist exhibitions in the 1920s, Installation Art became an established form in the US by the 1960s.

Perhaps the first example of Installation Art was the Proun Room created by El Lissitzky in 1927. Lissitzky transformed his two-dimensional works into an ‘abstracted room’ to capture the transformation he believed the Russian Revolution would bring about.

Over the next two decades, Dada artists also ventured into the realm of three-dimensional, all-encompassing works, redefining the spaces within the gallery.  For example, in 1943, Marcel Duchamp placed A Mile of String throughout the gallery to experiment with how visitors would navigate through it; and in 1957, Alan Kaprow filled a gallery space with randomly found objects.

When was the Term Installation Art Widely Used?

By the 1960s, the term Installation Art was widely used to describe created environments. The advent of digital technology impacted Installation Art’s capacity for viewer interaction and opened whole new avenues of experience. 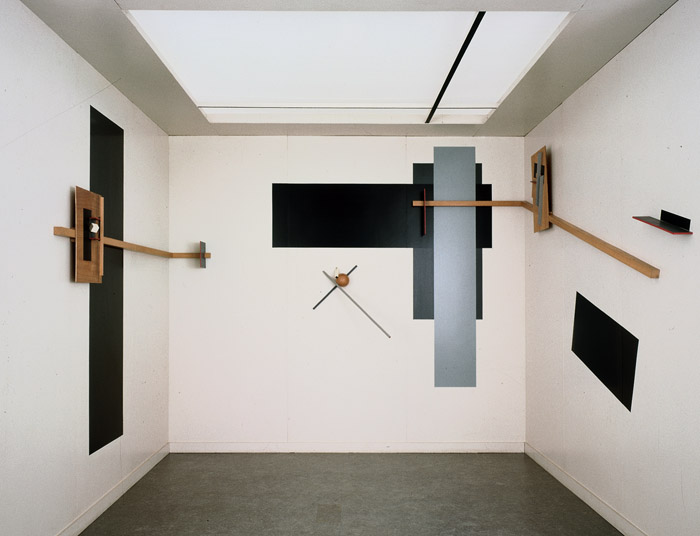 Relationship to Process and Performance Art

In Contemporary Art, genres often overlap. This is particularly true of Installation and its relationship to Process and Performance Art.

What is Process Art?

Process Art creators focus on making art rather than on the end result, and artists may invite the audience into this experience through installation. Sculpture is also a popular form of process art.

What is Performance Art?

Performance Art is also related to Installation Art. Because it is presented live, its impact is created at the moment, and change and transience are the core themes. Installation Art may include performances, but they are not the point.

Likewise, performance may be part of the installation’s experience, but it will not be the whole. In both instances, the audience is often invited to be an active participant in some way.

In the end, the distinction lies in the intention of the creator and in the response of the viewer.

What is Found Object Art?

Found Objects or Readymades are a type of sculpture that centers on ordinary objects – not created by the artist – that are elevated to art by their selection and placement.

Found Object Artists focus on defining art rather than creating it and push the boundaries of what qualifies as art.

Found Objects can stand on their own, but they are also a common aspect of installations. They contribute to the overall experience as they are incorporated into the space and joined to other elements.

What is Large-Scale Art?

Large-Scale Art is a type of sculpture that took on new popularity and meaning in the second half of the twentieth century.

In this genre, scale can be used to display power and prestige, dominate the space and impress the viewer, or draw attention to everyday objects or critique bourgeois ideas of importance. 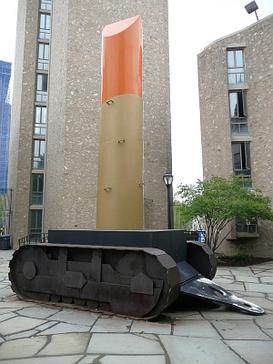 Non Representational art does not begin with a subject or represent anything specific in the real world.  Such art is ‘nothing’ (according to the artist) outside of what the artist intends and what the viewer experiences.

What is an example of a non-representational sculpture?

The End of the 20th Century by Joseph Beuys (1983) is a good example, consisting of 31 basalt rocks distributed across the gallery floor. Each rock has a cylindrical hole stuffed with clay and felt. It doesn’t look like or represent anything.

In contrast, Random International’s Rain Room (2013) is highly representational. Consisting of torrents of rainwater gushing into the room,  it only comes to life when someone enters the space.

Visitors can pass through the rain without getting wet due to the motion sensors in the water spouts. The installation quite literally represents rain, so Installation Art can be either representational or non-representational, but either way, it calls on the viewer to respond emotionally and intellectually. 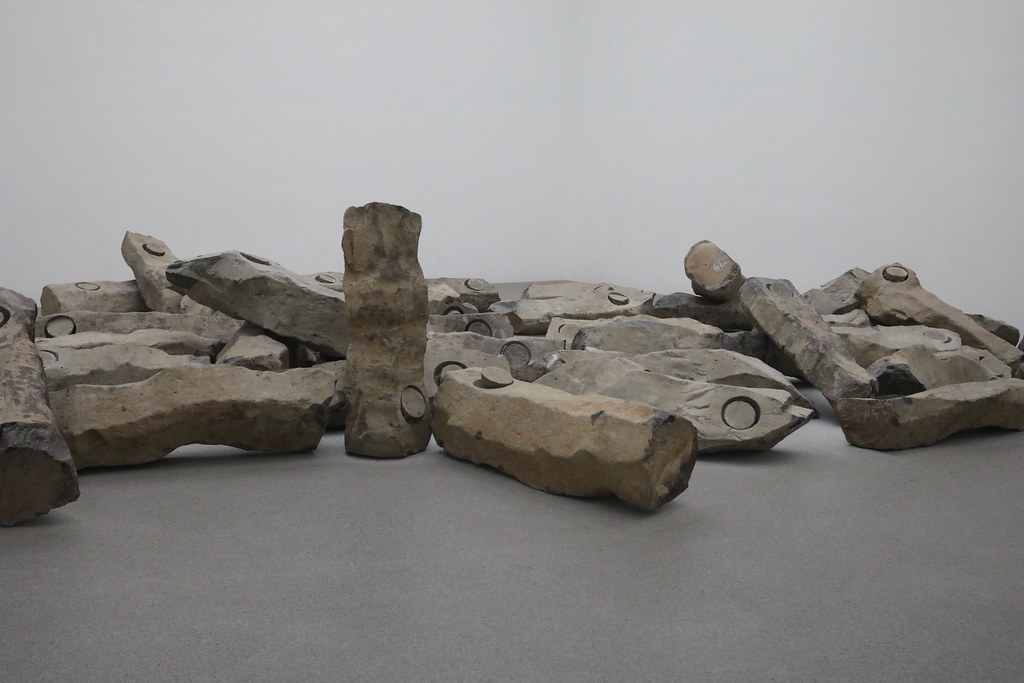 All Bourgeois’ images are personal and relate to her private experiences going back to childhood. An accomplished painter and printmaker, Bourgeois transitioned to sculpture because it appealed to her need for concrete stability.

Her radical sensibilities led her to push against the established boundaries of art, and many of her subjects seem harsh and negative, but she says, “I translate hate into love.”

What is Louise Bourgeois best known for?

Bourgeois’ famous installation art is a series of gigantic spider sculptures, Maman, which are permanently installed in Canada, Japan, Qatar, Russia, South Korea, Spain, the UK and the US.

Although they look threatening, Bourgeois contends that they represent both joy and benevolence.

The smallest three-dimensional spider was a four-inch brooch, and the largest was 30 feet tall. Most of them are installed outside because of their size. 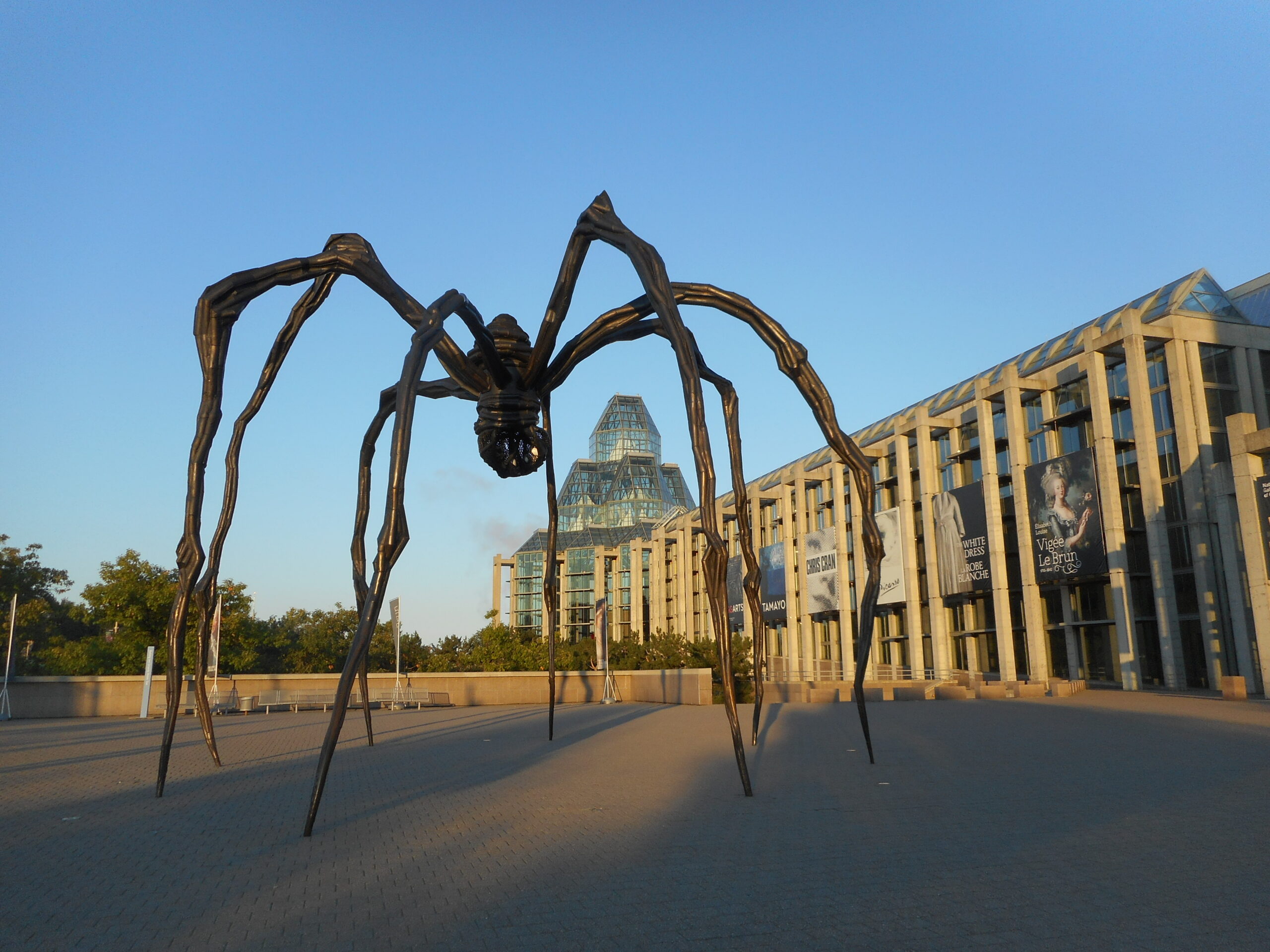 The terrain of his childhood sparked his early interest in natural materials as sources of art. Eliasson’s works are complex and call on the expertise of architects and engineers as well as collaborative artists.

Eliasson’s art often plays on and challenges the senses. In his 1996 work, Your Strange Certainty Still Kept, a perforated hose and strobe lights gave the impression of droplets of water freezing in mid-air. He played with perceptions of color in Room for One Colour (1997) and Room for All Colours (2002).

His most famous work, The Weather Project (2003), was hailed as a milestone in contemporary art. Staged at London’s Tate Modern, this installation perfectly combined technology and art to create a sun rising out of the mist. 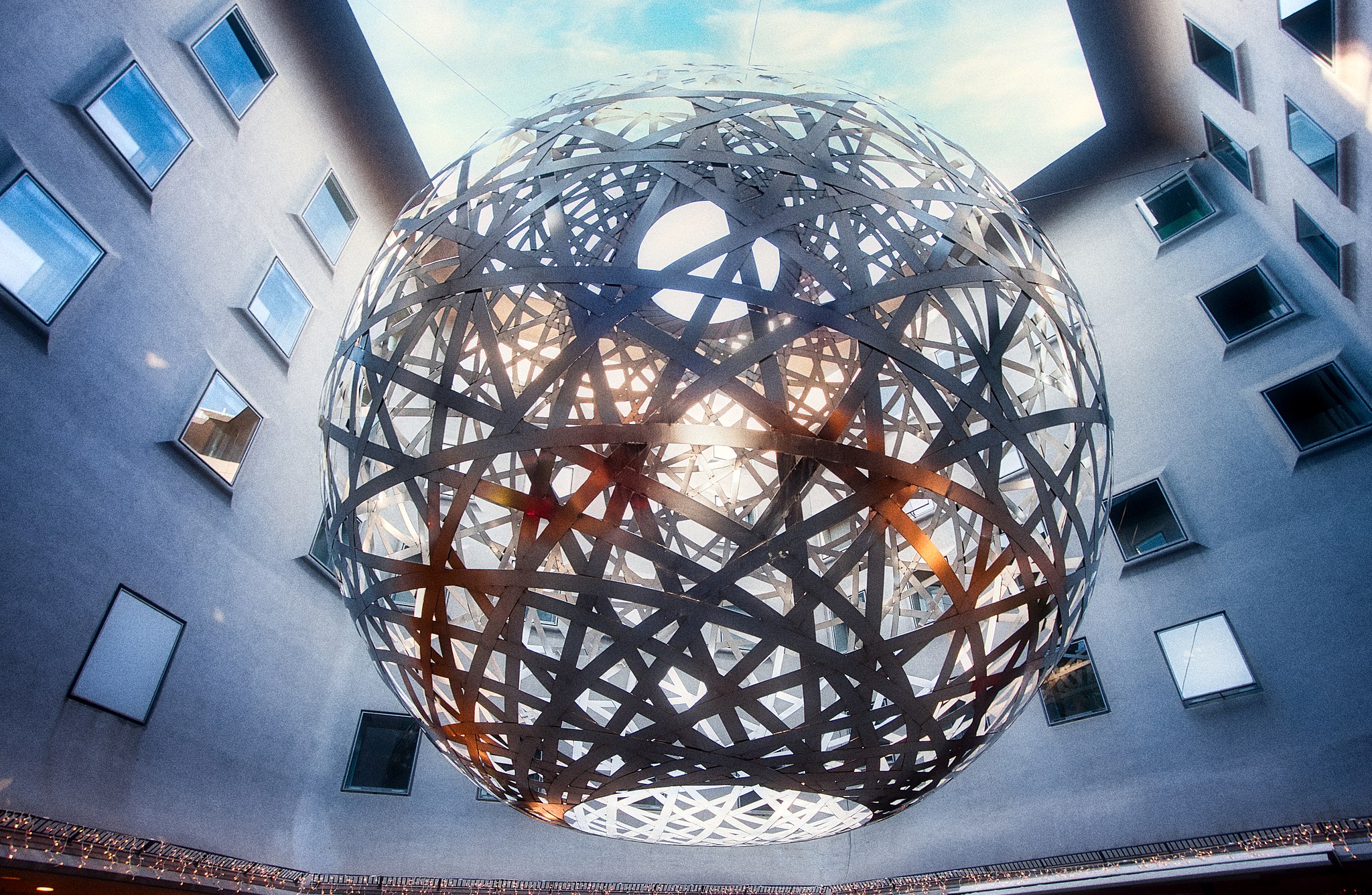 Born in Italy into a working-class family, Maurizio Cattalan dropped out of school and had no art training. After working at menial jobs, he moved to Milan and ventured into art.

In his first work, he created a house of cards from copies of an art magazine, photographed the sculpture, and made a fake magazine cover. He pasted his version on actual copies and sold them to shops and galleries, establishing himself as an artist with a sense of humor and irony.

He had a very strong fear of failure and escaped from his first solo showing by closing the gallery and putting a “Be back soon” sign on the door.

He is best-known for A Perfect Day (1999) where he duct-taped a friend to a gallery wall for two hours, and for America (2016), a solid gold, fully functioning toilet installed in a restroom at the Guggenheim. 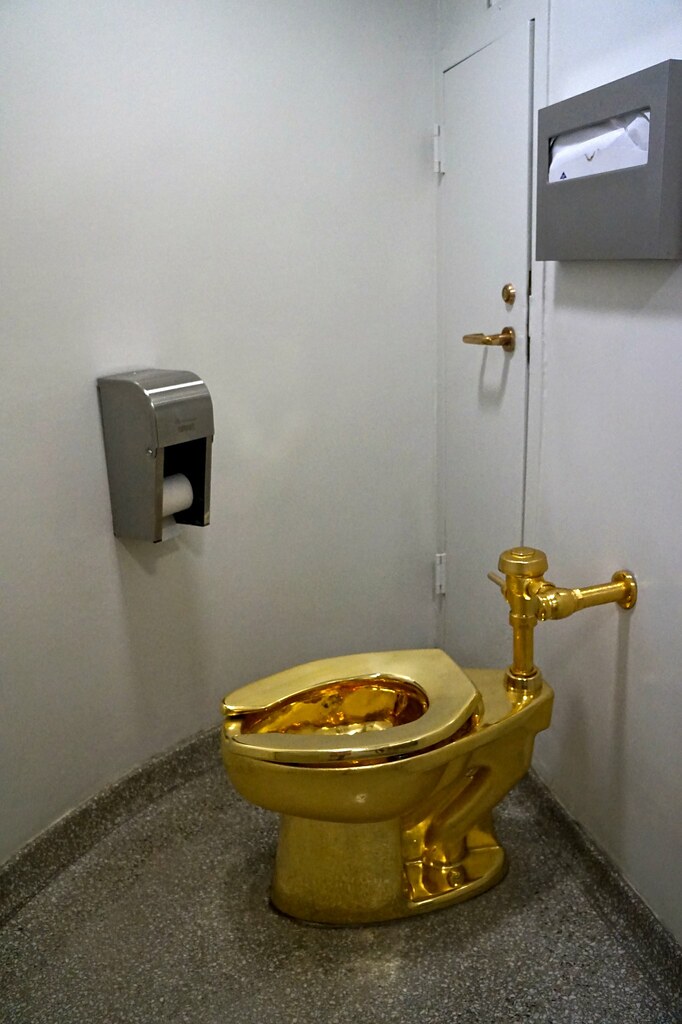 A native of Tacoma, Washington, Dale Chihuly is an internationally known glass artist who changed the view of glass as a medium and revolutionized how glass blowing and design are taught.

He blew his first glass at age 34 and knew he had discovered his calling. After studying in Venice, he co-founded the Pilchuck Glass School, focusing on the communal nature of artistic creation.

Working with a team, he has created installations too complex for a single artist, including the largest glass sculpture in the world, Fiori di Como (1970) in Las Vegas, made of 20,000 tons of hand-blown glass.

He has 400 permanently installed collections with permanent exhibitions in 200 museums.

Although much has been written about the meaning of Chihuly’s work, he is more focused on light and the possibilities of glass as a medium, fascinated with the breath that creates the work from a substance that is both fragile and permanent. 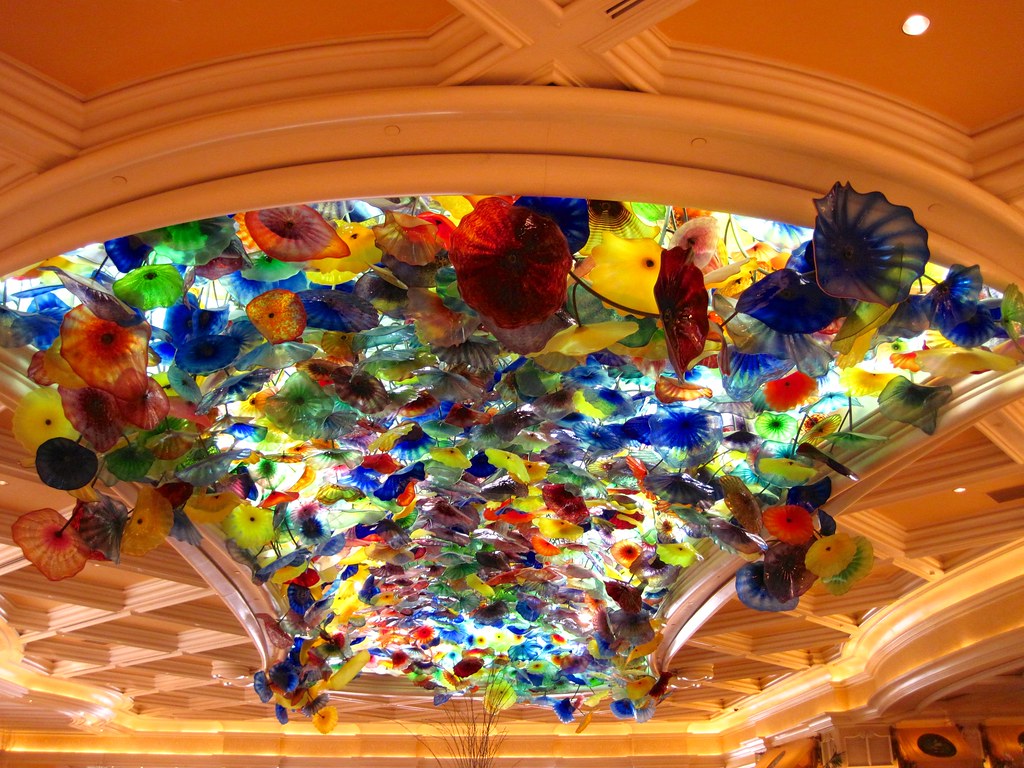 Anish Kapoor is a British-Indian sculptor who specializes in post-minimalist installation art and conceptual art. Kapoor’s art is recognizable by its simplicity of style and use of geometric and organic shapes. He is also known for his experimentation with light, reflection, and void.

What is the most famous installation art?

Some of Kapoor’s most famous works include Sky Mirror, a 35ft mirror of stainless steel, and Cloud Gate, located in Chicago, IL and more popularly referred to as ‘The Bean.’ Although both of these pieces are permanent objects, their beauty comes not from the items themselves but from the changing nature of what they reflect.

Anish Kapoor is also known for the controversy over his exclusive licensing of the substance Vantablack, sometimes called the ‘blackest black.’

Though others have criticized Kapoor for his exclusivity, and one pigment developer created a ‘pinkest pink’ available to everyone but Kapoor, the artist insists the controversy is Performance Art. 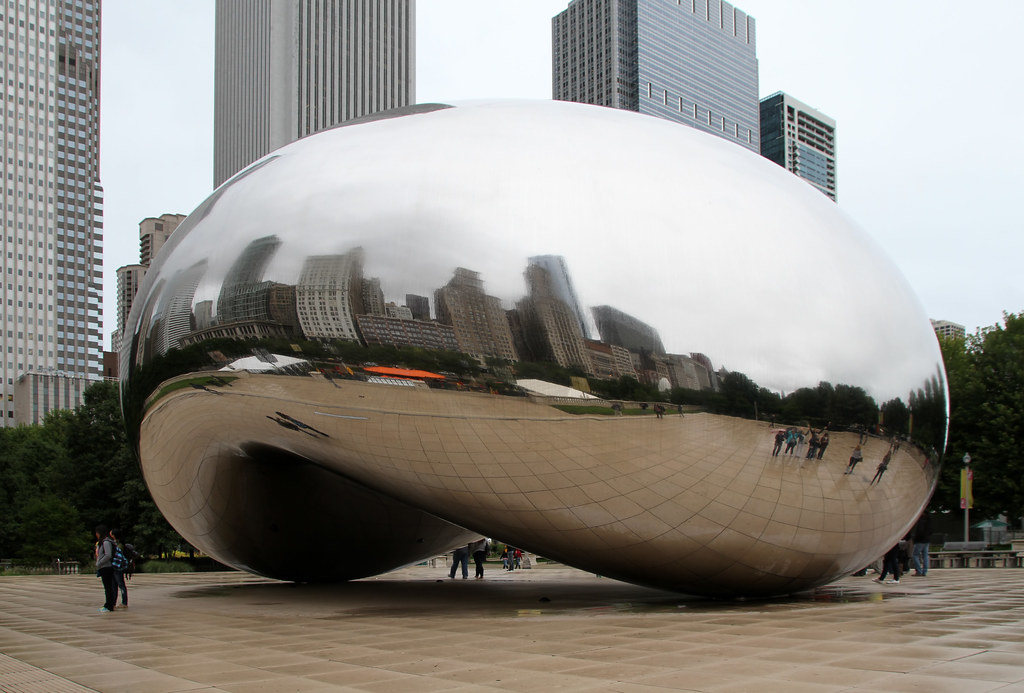