Discover more about these impermanent forms and their popularity in contemporary artistry. 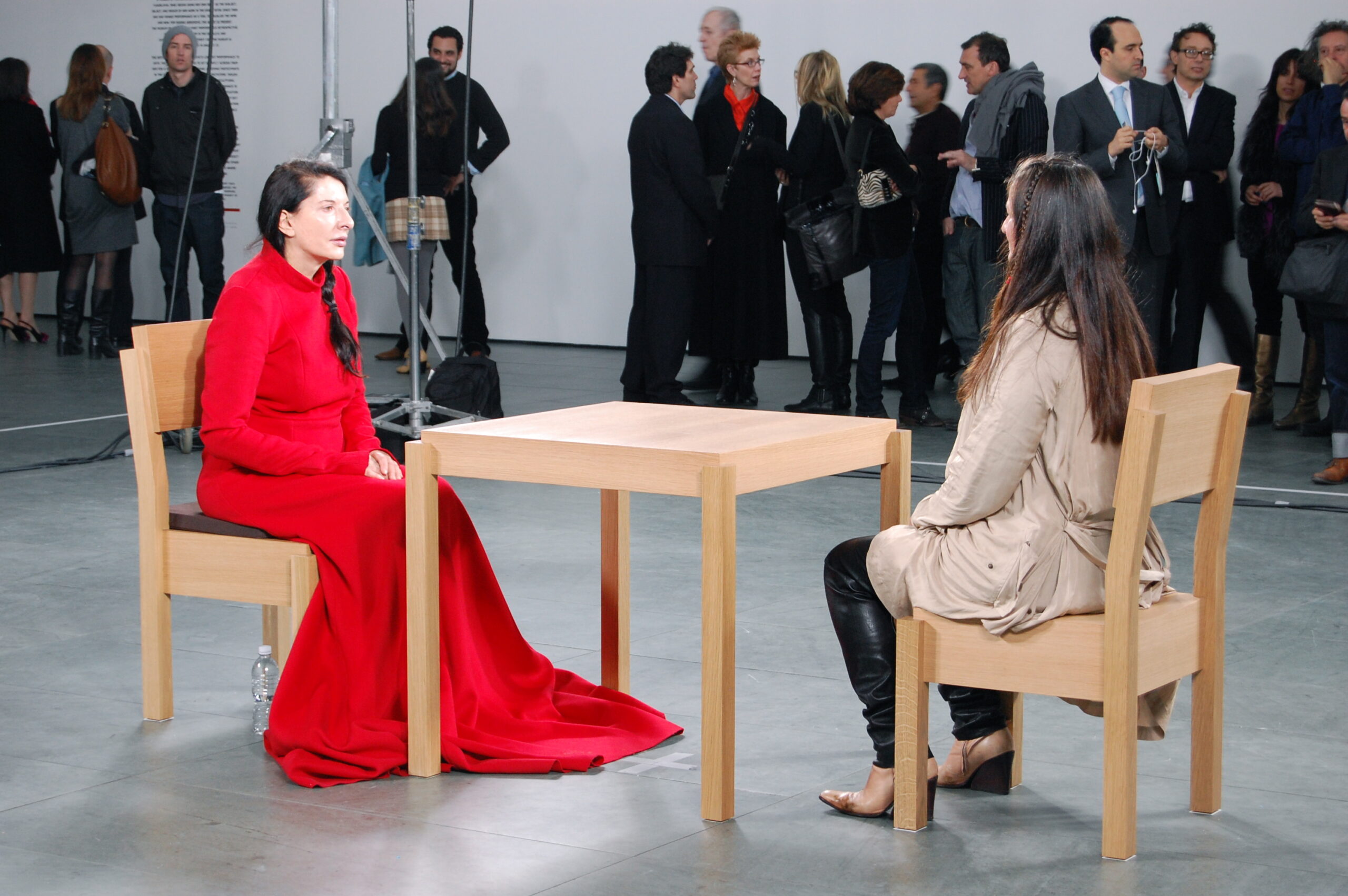 Process Art & Performance Art are two genres that emerged in their current forms in the 1960s and continue to be popular today. While some of the style and theory behind these two art types have evolved, the art itself continues to be made. It’s important to note that Process and Performance represent new ways of creating art; they are not artistic movements with cohesive styles and philosophies.

Both Process and Performance Art are ephemeral. The art is, by and large, not designed to last. Instead, it’s made to exist for an amount of time and then end or otherwise become completed. The life-cycle of a piece varies and is sometimes defined, sometimes undefined. The artifacts that are left, whether it is a video, photograph or a painting, are not the art itself but records of a piece of art that has already come and gone.

Performance Art is an experimental art form that arose in Europe and the United States in the 1960s, though its origins can be traced all the way back to 1910s’ dada cabarets. The defining feature of Performance is its live nature. Often artists communicate directly with the audience, though they may also make themselves or others only available for viewing, or the artist may perform the art privately and record it.

Determining whether or not something is Performance Art can be difficult, and it often comes down to the intent of the creator. Performance Art is a narrow field of artistic creation that does not include every type of performance. Instead, Performance Art is “a set of questions and concerns about how art relates to people and the wider social world,” according to art theorist Jonah Westerman. It is often shocking, unnerving, or avante-garde.

Process Art distinguishes itself from Performance through its emphasis on the creative process. Where Performance takes the world-at-large as its subject matter, Process’ central focus is on art and how it is made. Therefore, process art is defined as an art style in which the process of creation is made to be a prominent aspect of the completed work.

Because of its emphasis on art as a subject, finished works that come from process art are a larger part of the holistic art experience, compared to performance. Process artists often endeavor to communicate the process of artistic creation through the finished piece – sometimes by leaving elements unfinished.

The birth of Process Art is most often attributed to Jackson Pollock and his abstract expressionist works of the 1960s and 70s. The layers of dripped and poured paints in Pollock’s work allow the viewer to envision the artistic process. 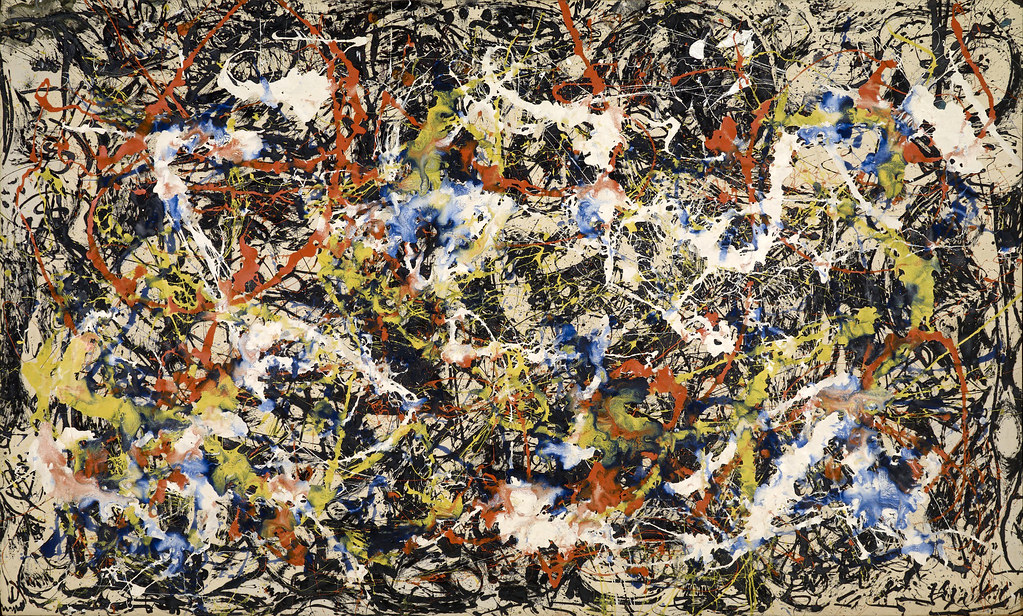 Post-minimalism is a term coined by Robert Pincus-Witten to describe the artistic reaction against popular 1960s and 70s Minimalism. Post-minimalism (not to be confused with Maximalism), emphasizes process, expression, nontraditional materials, and “the demystification of the artistic process through an element of chance.” Contemporary versions of Process and Performance Art, as well as the related fields of Body Art, Site-Specific Art, and Concept Art were all born from post-minimalism (although the creation of genres such as Performance Art can be traced farther back).

The 1966 artist showcase Eccentric Abstraction was a key moment in the development of post-minimalism and its subsequent influence on other genres. It featured works from 9 different artists, and emphasized the use of tactile, often organic materials in soft, flowing forms. Also in contrast to Minimalism, which stated that a piece of art “is what it is,” post-minimalism invites the multiplicity of interpretation. 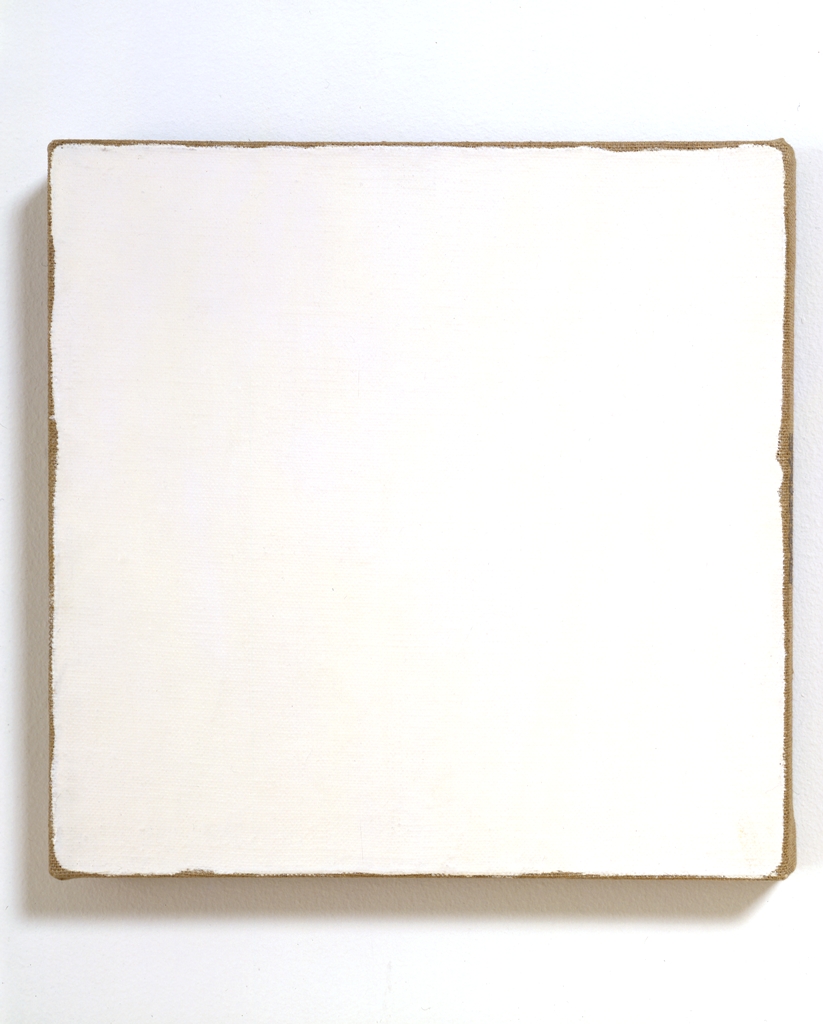 Endurance Art is a particular type of performance art that includes an artist or artists undergoing some form of hardship. Pain, solitude, starvation, and exhaustion are some of the discomforts artists have chosen to endure as part of their work. Depending on the type of action involved, a piece of Endurance Art can last anywhere from hours to years. Particularly long types of Endurance Art are also called durational art or durational performances.

Benjamin Bennett’s Sitting and Smiling is an ongoing work of Endurance Art that began in 2014. In it, Bennett records himself sitting on the floor and smiling at the camera in four-hour installments that he uploads to YouTube weekly.

Body Art is a subgenre of both Process or Performance Art in which a work of art consists of or is created on or with a human body. Body painting and molding, as well as tattoos, piercings, and scarification, may all be included in Body Art. A work of Body Art may also be Performance, Process, or Endurance Art, or it can include elements of multiple genres.

Yves Klein’s series of paintings in a style he invented and called anthropometry is an early example of Body Art. In it Klein directed models covered in blue paint to press their bodies against sheets of plain gauze, leaving behind the imprint of bodies’ forms and motions. While much of Body Art uses the body as a canvas, Klein in contrast used the bodies of his subjects as “living brushes” drawing attention to the process of artistic creation. 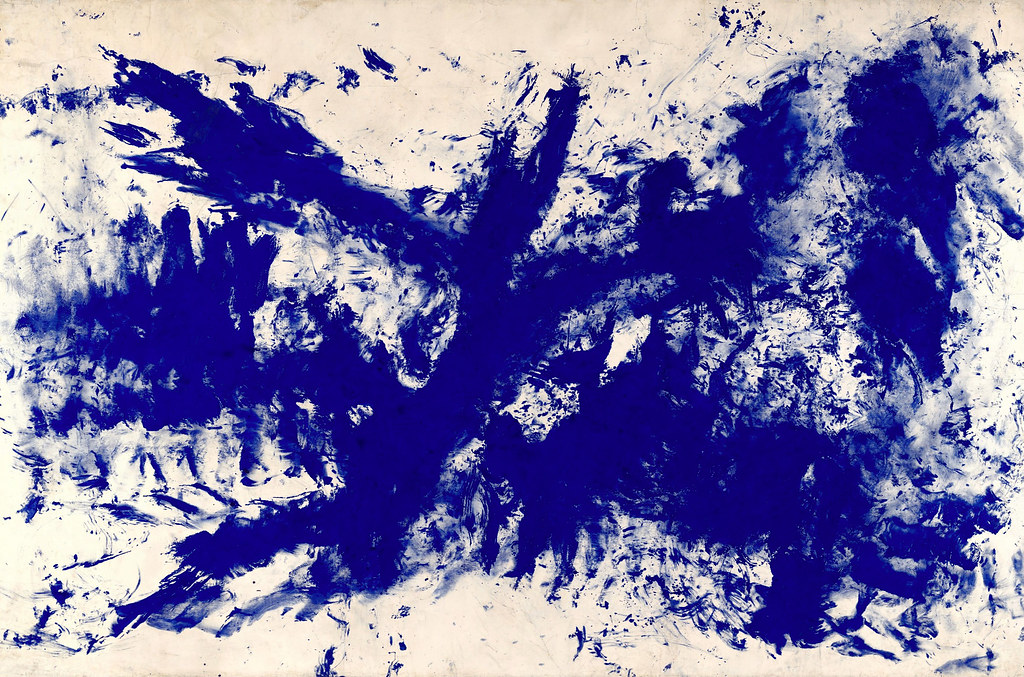 Land Art is a type of Site-Specific Art in which a work is created to exist in a particular place. While Site-Specific Art may be designed to be permanent and/or static, the nature of Land Art includes an inherent element of process. Land Art, which is also known as Earth Art, environmental art, and Earthworks, first came to prominence in the 1960s and 70s.

This genre utilizes natural materials including soil, rocks, vegetation and water and often relies on natural changes such as weather, tides, and seasons to bring the piece of art to completion. Likewise, Land Art is usually created far from population centers but will then be photographed or filmed for audiences to view in a gallery or public space. Land Art often deals with themes such as the rejection of commercialism or urban living and embraces the rural and ecological. 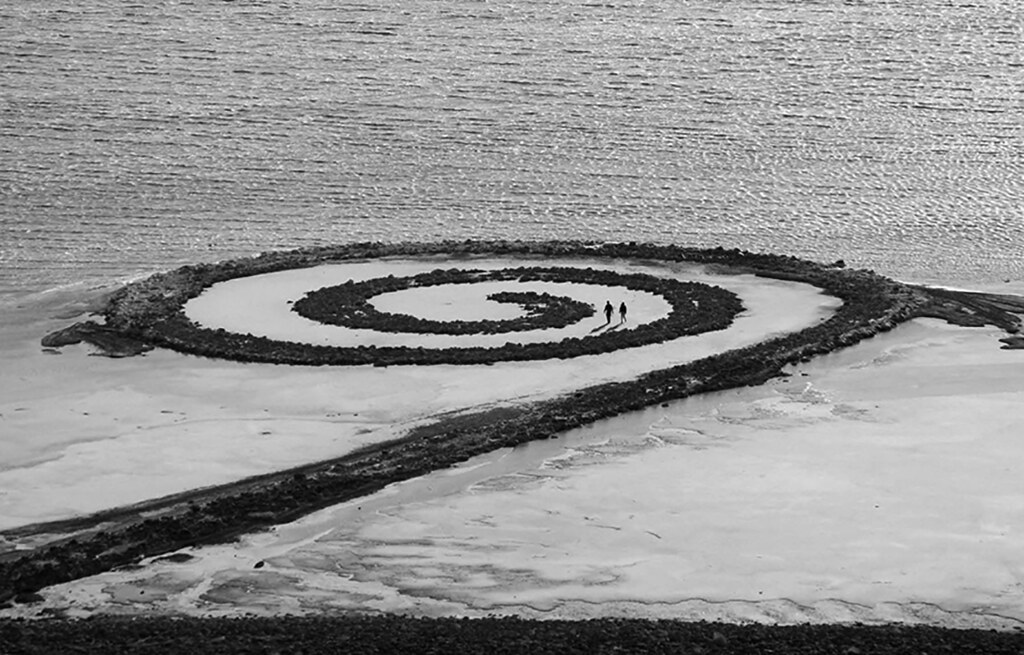 Fluxus was an important avant-garde art movement of the 1960s that paved the way for many artists and movements to follow. Although Fluxus itself was short-lived, it left an important mark on the world of Contemporary Art. The Fluxus movement came out of Western Europe and then spread across European cities and to New York, which ultimately became the hub of its influence.

Fluxus focuses on collaboration, experimentation and process, and it rejects conventional art. The name Fluxus means ‘to flow,’ and fluidity and boundlessness are at the center of the movement. Fluxus artists often worked together across mediums to create installations and organize artistic events that would include a variety of ideas and media. Fluxus has been described as “the most radical and experimental art movement of the sixties.” The 1963 Fluxus Manifesto is a key piece of Fluxus art.

Marina Abramović is one of the highest-regarded performance artists alive today. She is a Serbian artist known for her high-risk and endurance art pieces. In her performance pieces, Abramović literally confronts discomfort, pain, and even her own mortality. Often her Performance Art intersects with Body Art, exploring themes of sexuality, autobiography, and the relationship between audience and artist. Abramović’s endurance works are so intense that she began a boot camp in 2012 to train artists that would perform with her.

Arguably Abramović’s most famous performance work is Rhythm 0, which occurred in 1974. The audience was invited to choose from a variety of objects – from perfume, honey, and wine to a thorny rose, a knife, and even a loaded pistol – and to apply the object to Abramović’s body. The performance ended when a viewer held the pistol to the artist’s head, and a physical altercation between participants broke out.

In 2010 Abramović performed The Artist is Present in which she sat at a table, engaging in direct eye contact with over 1,500 viewers.

Ai Weiwei is a Chinese documentarian and visual artist whose work is grounded in activism, particularly in opposition to the Chinese Government. His art has been foundational for the development of Chinese modernism, and he is often referred to as China’s most famous artist.

Ai Weiwei brings his different artistic pursuits together, blending installation, performance, video, and photography. His 1995 performance Dropping a Han Dynasty Urn and the three still-frame photos that captured the event are some of his most notable works. He also works in statuary and wood carving.

Ai Weiwei grew up in exile with his father, a famous Chinese poet. The harsh conditions of his upbringing led him to be openly critical of the Chinese government, focusing on democracy and human rights. In 2011, Ai Weiwei was arrested and held without charge for 81 days before being released. 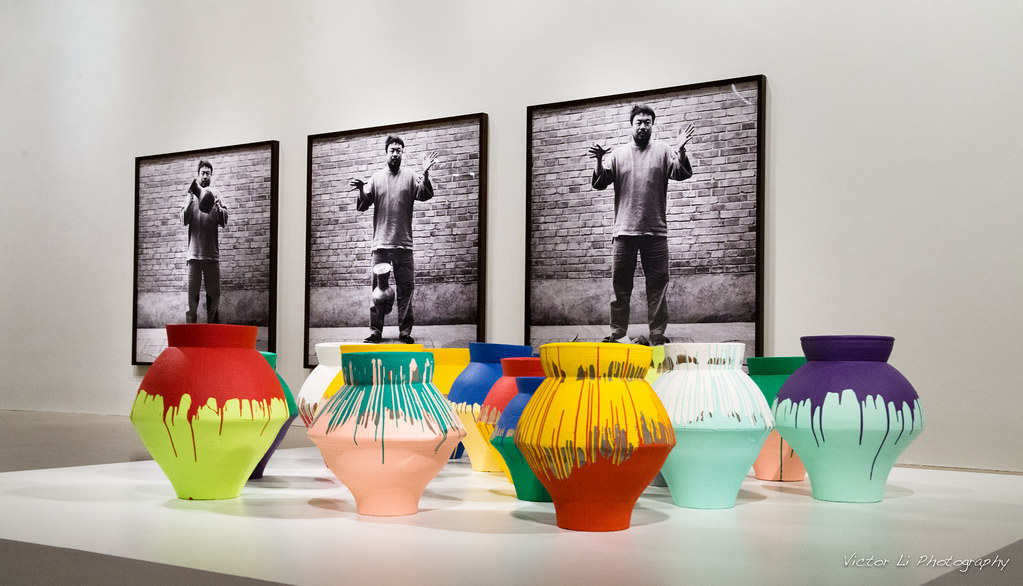 ‘Christo and Jeanne Claude’ is the collective name of artistic partners known for their large-scale environmental installations. The two met and married in Paris, working first under the name Christo, before later becoming Christo and Jeanne-Claude. Christo continued the pair’s work after Jeanne-Claude’s death in 2009. Christo died in 2020, and their work L’Arc de Triomphe, Wrapped was presented posthumously in 2021.

Christo and Jeanne Claude are best known for their series of monumental wrappings. Their work is notable for its scale and use of fabrics; the wrappings were also quite controversial and often took decades of planning and political negotiating.

Though Christo and Jeanne-Claude’s monument wrappings took years to plan, they were often in place only for a few days. In addition to themes of joy, beauty, and new perspectives on the familiar, the couple considered the complexity of the planning as an integral part of their artwork. 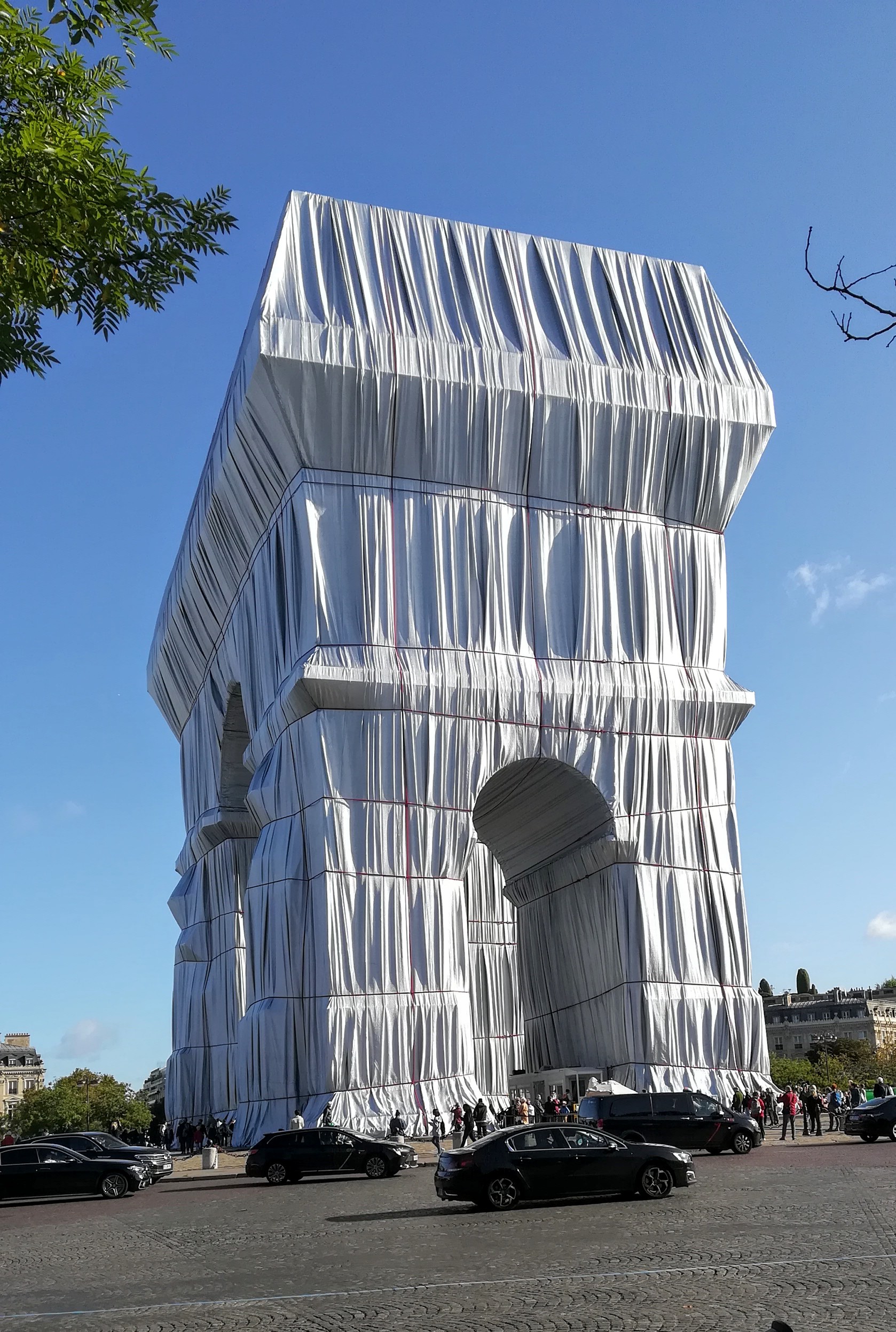 NFTs and Beyond: 21st-Century Digital Art;

The Message, not the Medium: Feminist, Postcolonial, and LGBTQ+ Art;

Neo-Expressionism: Once More with Feeling;

The Changing Focus of Contemporary Photography;