Kinnuverse » Culture » A Fresh Look at Contemporary Art » What is Neo-Pop Art?

What is Neo-Pop Art?

Learn the history of one of contemporary art’s most popular styles and be introduced to some of the movement’s greatest players. 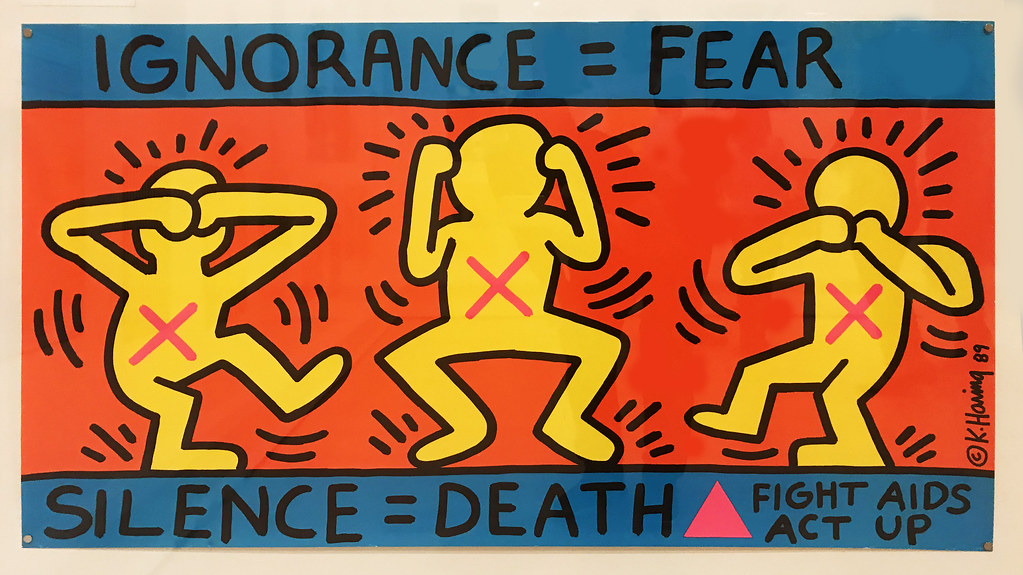 Pop art and its contemporary counterpart Neo-Pop both originate from the artistic inclination to draw inspiration from popular culture and to eschew traditional – some may say ‘elitist’ – definitions of art.

Pop art began as a modern art movement in the 1950s that utilized the imagery, styles and themes of popular, everyday culture. In particular, pop artists draw inspiration from the recognizable imagery of commercial art, the mass media and popular entertainment such as comic books. Pop art can often be recognized by its bright colors and bold, distinct lines.

Although the word ‘pop’ comes from the word ‘popular’, it doesn’t necessarily mean that pop artists set out to create popular pieces of art. Instead, they draw from popular culture and commercialism, often to offer a critique or commentary on these styles.

Neo-Pop, sometimes called ‘Post-Pop,’ is a style that emerged in the 1980s and 90s, inspired by the Pop Art movement of the 1950s. The term ‘Pop Art’ was first coined by the British curator Lawrence Alloway in 1955. Alloway was looking for a way to describe this emerging artistic style.

Pop Art began to ‘pop up’ in both London and New York City around the same time, partly in response to Abstract Expressionism, and inspired by previous movements, including Dadaism and Cubism. Notable Pop artists of this emerging genre in the 1950s and 60s include Roy Lichtenshtein, Andy Warhol, and Robert Rauschenberg. These artists and others would serve as inspiration for the Neo-Pop movement at the end of the century. 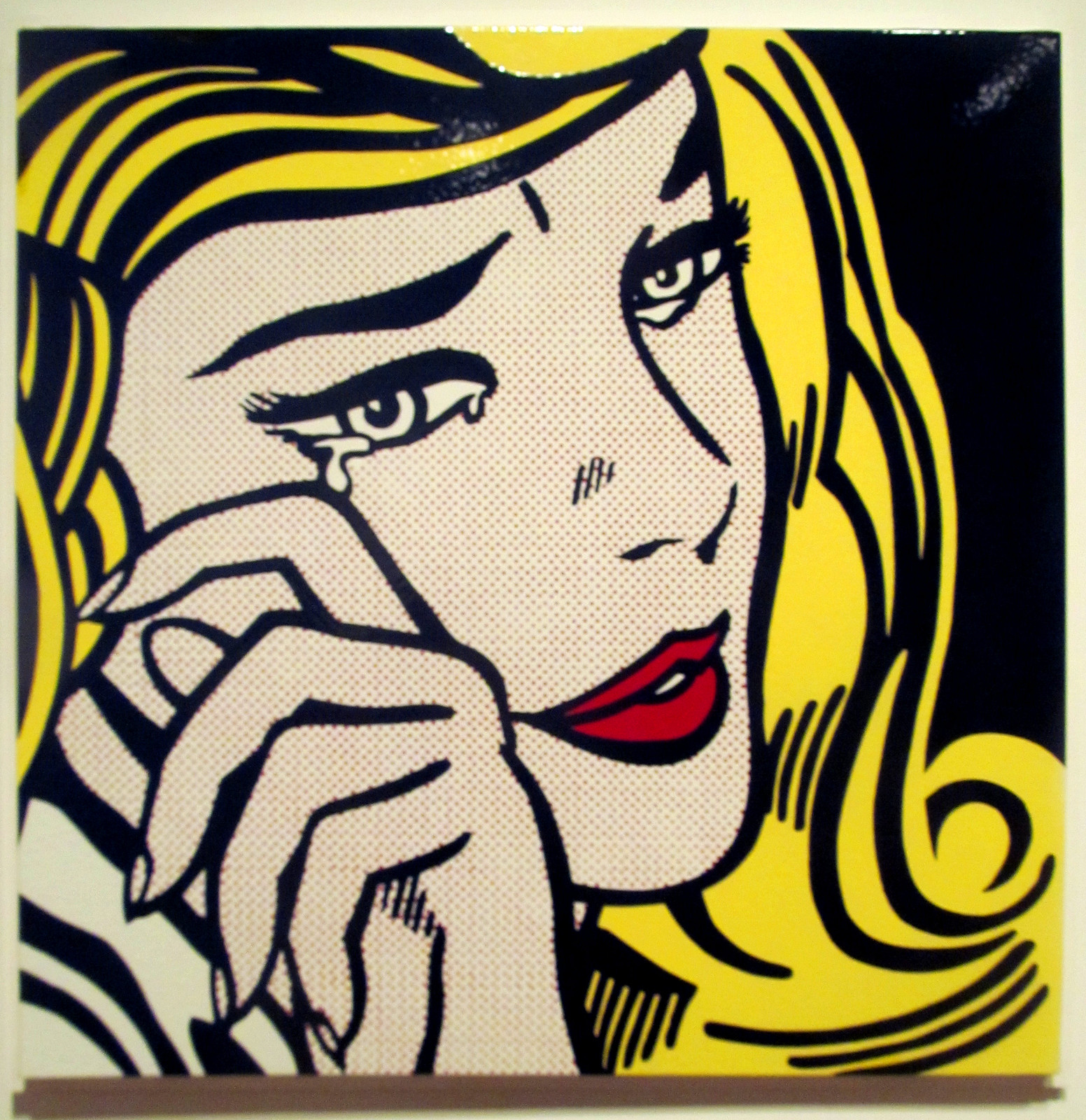 Neo-Pop is the resurgence of Pop Art styles and ideas beginning in the 1980’s, and developed in response to 70s minimalism. It draws on the vibrant and bold styles of Pop Art, as well as pulling inspiration from similar areas of life including celebrities, popular culture, and advertisements. Also similar to the original Pop Art movement, Neo-Pop uses the style of the dominant culture, and capitalism/commercialism in particular, in order to critique, question, and present irony.

Because Neo-Pop emerged as a desire to return to Pop Art, the two movements have very many similarities. In fact, there are even artists, such as Claes Oldenburg, whose works span the two. The greatest contrasting factors between Pop Art to Neo-Pop are the decades in which the works are created, the content matter (based on contemporary popular culture), and a greater number of sculptural and 3-dimensional pieces in Neo-Pop.

Neo-Pop is most often recognizable because of its bright colors, high contrast, clean lines, and use of popular media. It is uncommon to see visible brushstrokes, shading, or the use of natural or muted colors in Neo-Pop art. Whether it is intentionally designed to appeal to viewers or it is a byproduct of its reference material, Neo-Pop art is appealing to many viewers. Its designs are described as fun and youthful, but can also be garish or childish.

In addition to Pop-Art, Neo-Pop draws distinctly from Dada’s use of ‘readymades’ and found objects. This genre of art uses pre-fabricated objects – sometimes altered, sometimes not – to communicate a message. This type of art is quite controversial and invites many questions about the limitations of what can be defined as art; however, it is generally accepted by the artistic community, and examples can now be found in museums around the globe. 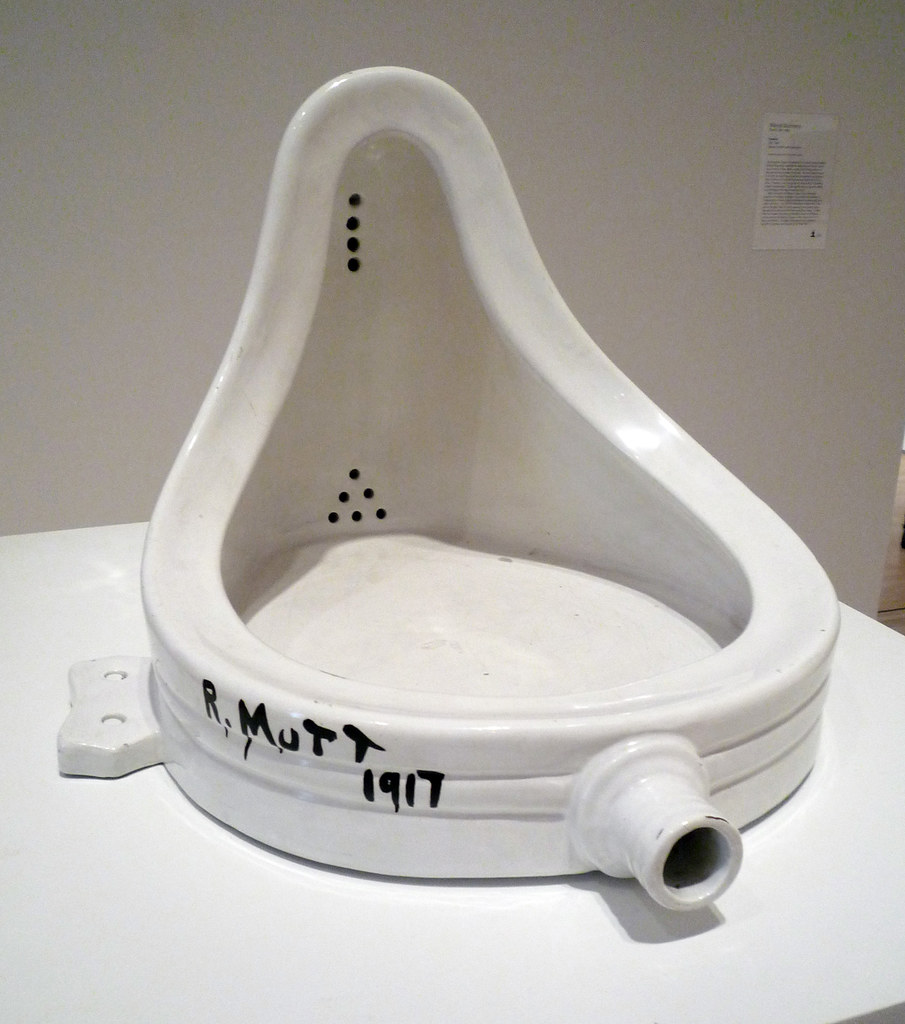 Yayoi Kusama is one of the most famous Neo-Pop Artists today. The international tour of her exhibit Infinity Mirrors sold out at every stop, and some blame the rise of ‘insta-worthy’ immersive experiences like selfie museums on the exhibit’s success.

Kusama is a Japanese contemporary artist who is best known for her installations and sculptures, but also works in paint, video, fashion, and more. Kusama first emerged on the art scene in the 1960s as a Pop artist, and her work continues to be wildly popular today.

Kusama’s style is defined by its bright, playful colors and an abundance of polka dots. She also experiments with scale and the repetition of images caused by mirrors. Although Kusama’s art is fun and exudes a childlike wonder, Kusama has also been open about her battle with mental illness and the role her art plays in the daily fight. 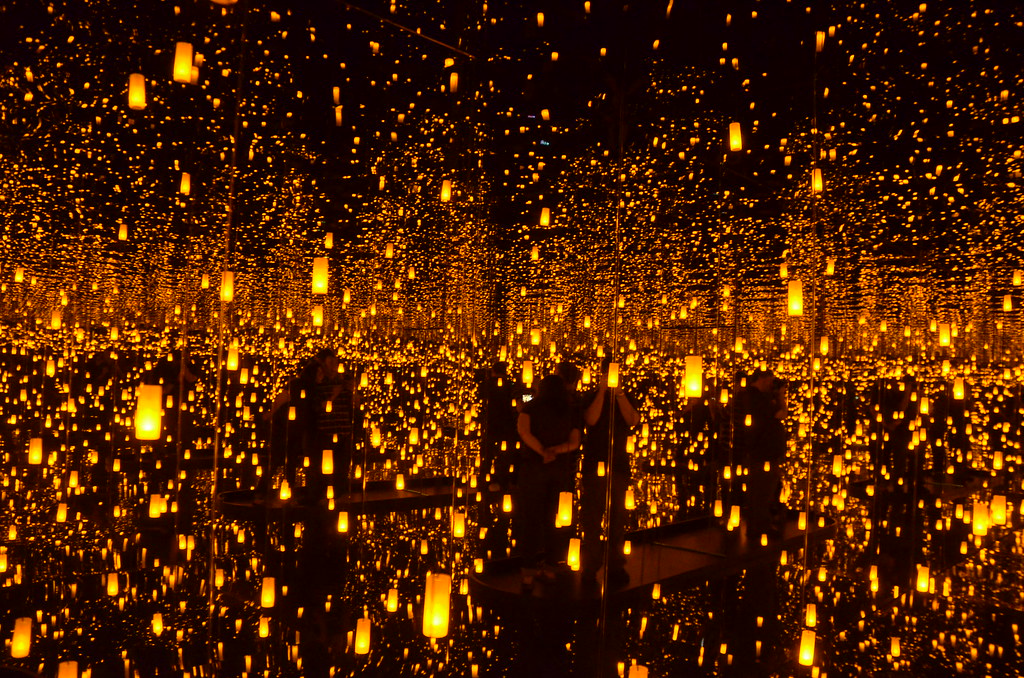 Through his work, Murakami transcends the boundaries between high and low culture – it is another element of his ‘superflat’ theory that these delineations are false. He produces paintings and sculptures (traditionally considered fine art), as well as commercial works in fashion, animation, and merchandise, and he has collaborated with world-famous designers and musicians.

Notable characteristics of Murakami’s art include colorful, smiling flowers presented in repetition, and cartoonish figures with large teeth or other violent features that are designed to appeal to and repel viewers simultaneously. 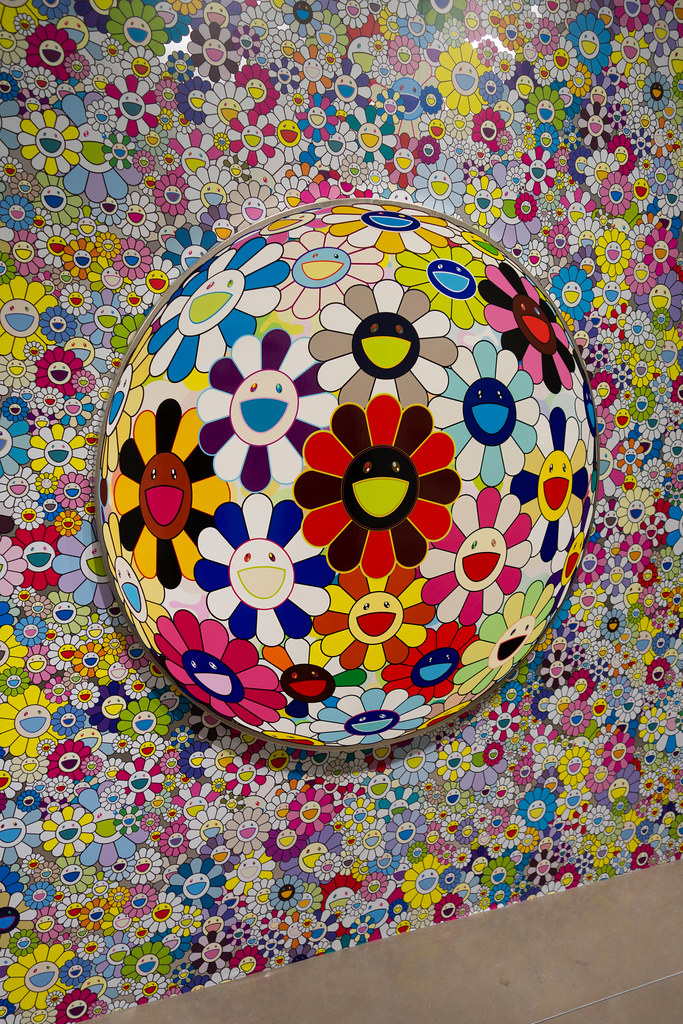 Damien Hirst dominated the art scene in the 1990s as a member of the group referred to as the Young British Artists (YBA). The YBA are formally trained but eschew Classic styles and compositions, turning instead to readymades and found art paired with shock tactics. They are described by Artforum as “both oppositional and entrepreneurial.” This is certainly true of Hirst, who is currently the UK’s richest living artist.

Death is a central theme in Hirst’s work. It takes two main forms: the first of which is the use of preserved animal carcasses, often suspended in formaldehyde. The second is his use of brightly-colored pills and other drug paraphernalia. He utilized both the image of these items and the objects themselves. Hirst’s most famous work is arguably The Physical Impossibility of Death in the Mind of Someone Living, which features a tiger shark suspended in formaldehyde. 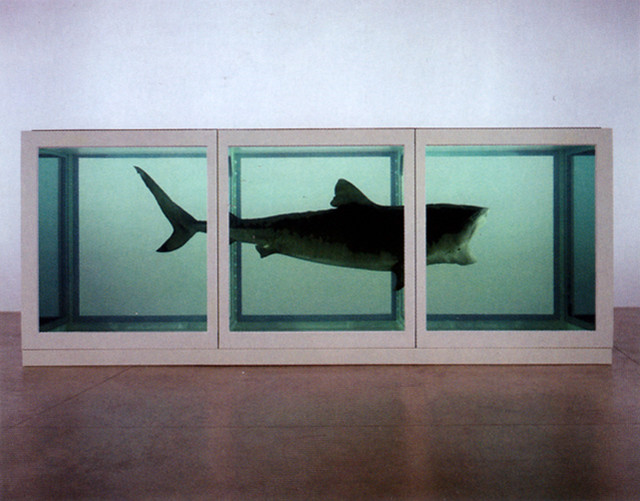 Jeff Koons is another entrepreneurial artist and two of his works hold records for being the first and third highest-priced pieces by a living artist ever to be sold. Born in 1955, Koons is an American artist working and residing in both New York City and York, PA.

Despite Koons’ popularity, he has also come under much criticism. He has stated that there are no secondary meanings to his work, nor are they created with any intention of critique or social commentary. Pairing this lack of depth with his large amount of financial success has turned some members of the art world against him. Additionally, some of Koons’ works are completed by teams of staff, not Koons himself, which has also drawn criticism. 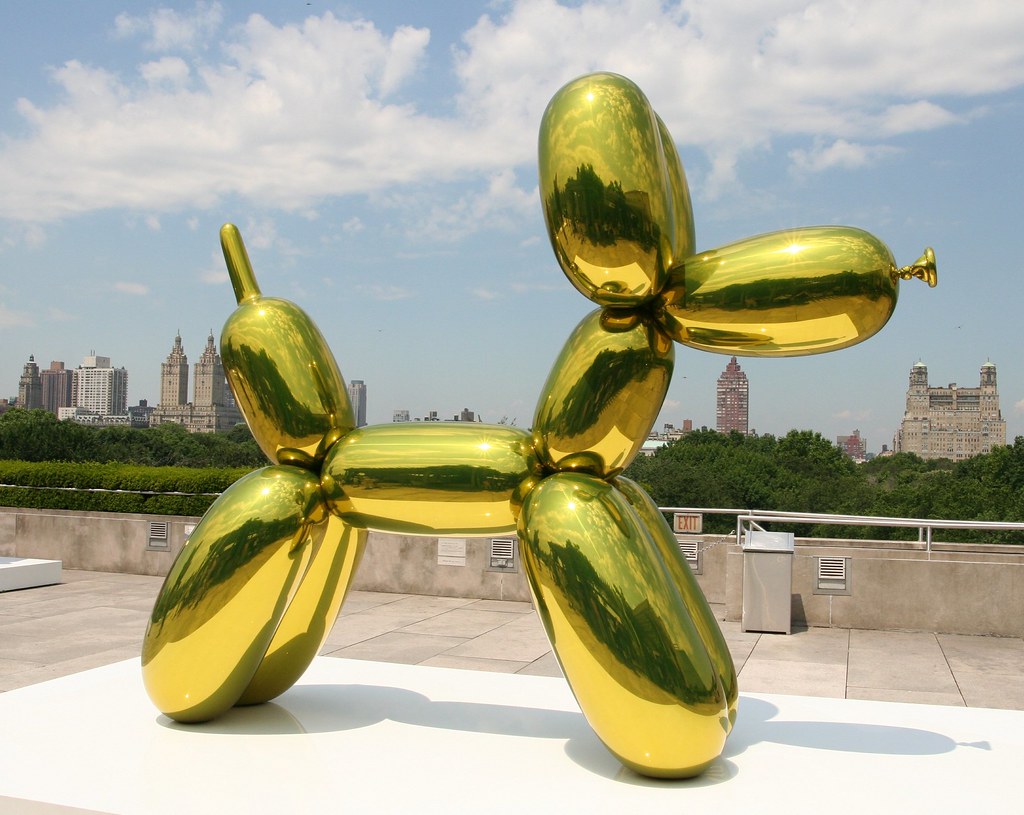 Keith Haring, who died in 1990 of complications from AIDS, emerged as an artist amidst New York City’s graffiti subculture of the 1980s. What began with spontaneous drawings of people, animals and other stylized images done on blank advertising spaces in New York subways has now become one of the most recognizable art styles in the world. Haring’s work later took on more intentional themes, most notably advocating for safe sex, homosexuality and AIDs awareness. In 1986, Haring opened the first of his Pop Shops with a desire to make his art accessible to a wide audience.

Keith Haring’s distinct style is often instantly identifiable. Its simplicity, flat, bold coloring and heavy, clean lines are partnered with a sense of movement that results in dynamic and energetic images. Although Haring began his career as part of the graffiti movement, his style has little in common with general graffiti aesthetics.