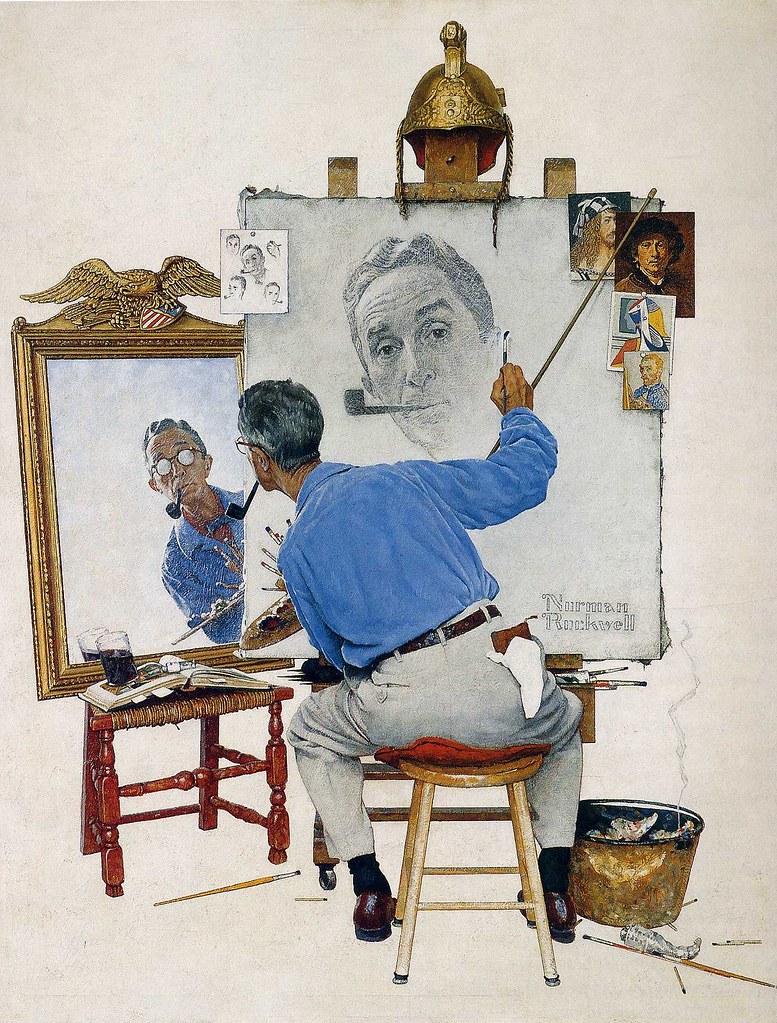 While the name Figurative Art can refer to all art prior to the introduction of Abstract Impressionism, this discussion will focus on its role in the contemporary art scene. Figurative Art pushes back against Conceptual Art, in which the artist’s idea is prioritized above execution, by insisting that a painting’s subject should have some reference to the real world, especially in the creation of human figures. In short, Figurative Art is thoroughly representational.

Although Figurative Art has much in common with Modern Realism in that both represent figures in the real world, Figurative Art uses more modern idioms and runs parallel to the general current of Expressionism. Contemporary Realism, in contrast, incorporates styles that predate post-impressionism. However, to the casual gallery observer, they are strikingly similar when placed in contrast to Conceptual and Abstract Art. An important sub-genre of Figurative Art is Stuckism, founded in 1999.

Firmly grounded in Figurative Art, Billy Childish and Charles Thomson founded Stuckism to oppose the trend toward Conceptual Art. Tracey Emin, an award-winning Conceptual artist and former girlfriend of Childish, inadvertently gave the movement its name by telling Childish he was “Stuck! Stuck! Stuck!” in his traditional art form. To explain their abhorrence for Conceptual Art, Childish and Thomson wrote a series of manifestos, addressed to the director of the Tate Modern, protesting the Tate’s acquisitions and the protocols by which it awarded prizes.

Sir Nicholas Serotes Makes an Acquisition Decision (2000) by Billy Childish is considered the signature piece of the movement.  It depicts the acquisitions director of the Tate looking at a pair of women’s underpants trying to decide whether they are a valuable Emin original or merely a pair of underwear. The style is that of a graphic novel illustration. Stuckist works are satirical, ironic, and humorous. 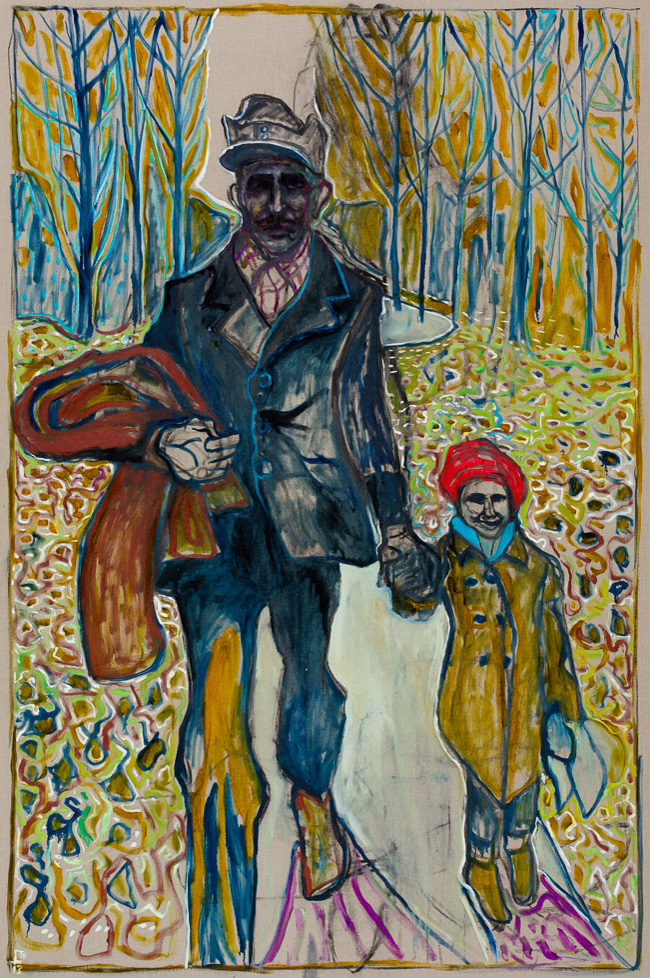 Contemporary Realism emerged in Europe following World War I as an attempt to ‘return to order’ following the chaos of the war and the tumult in art that preceded it. Reflecting influences of the 19th-century realists, Contemporary Realists portrayed an edgy reality rather than ideal forms, and many artists backed away from the abstract experimentation of the previous decade.  Even Pablo Picasso abandoned cubism for something more ordered and literal, and Classicism strongly influenced some Contemporary Realists. Although insisting on representational art, most realists came from backgrounds in abstract painting and brought many of its techniques into their work.

In the US, the great realist Edward Hopper exemplified the return to order. Norman Rockwell and Andrew Wyeth, though often criticized for sentimentality, represented a regional strain of this new realism. Most Contemporary Realism was accessible to less sophisticated consumers, and artists, particularly Rockwell, enjoyed significant commercial and popular success.

During the Cultural Revolution in the 1960s and 1970s, the only art the Communist Party allowed in China was Socialist Realism, depicting an idealized world of chubby, cheerful peasants. Pushing back on that starkly false idealization, Chinese Cynical Realism emerged in 1990 following the government crackdown on the Democracy Movement in Tiananmen Square and the forced closing of the Chinese Avant-Garde exhibition in Beijing.  Works in this genre focus on socio-political issues beginning with the Chinese Revolution and continuing through the immense cultural transformation of the past three decades.

The movement represents a brave stance for Chinese artists who are expressing an unprecedented level of individualism. Cynical Realism has been strongly criticized within China because it is seen to incorporate Western ideology. Despite their serious purpose, these works are highly humorous and satirical. Ironically, they are extremely successful commercially and draw the highest prices of any art in China. 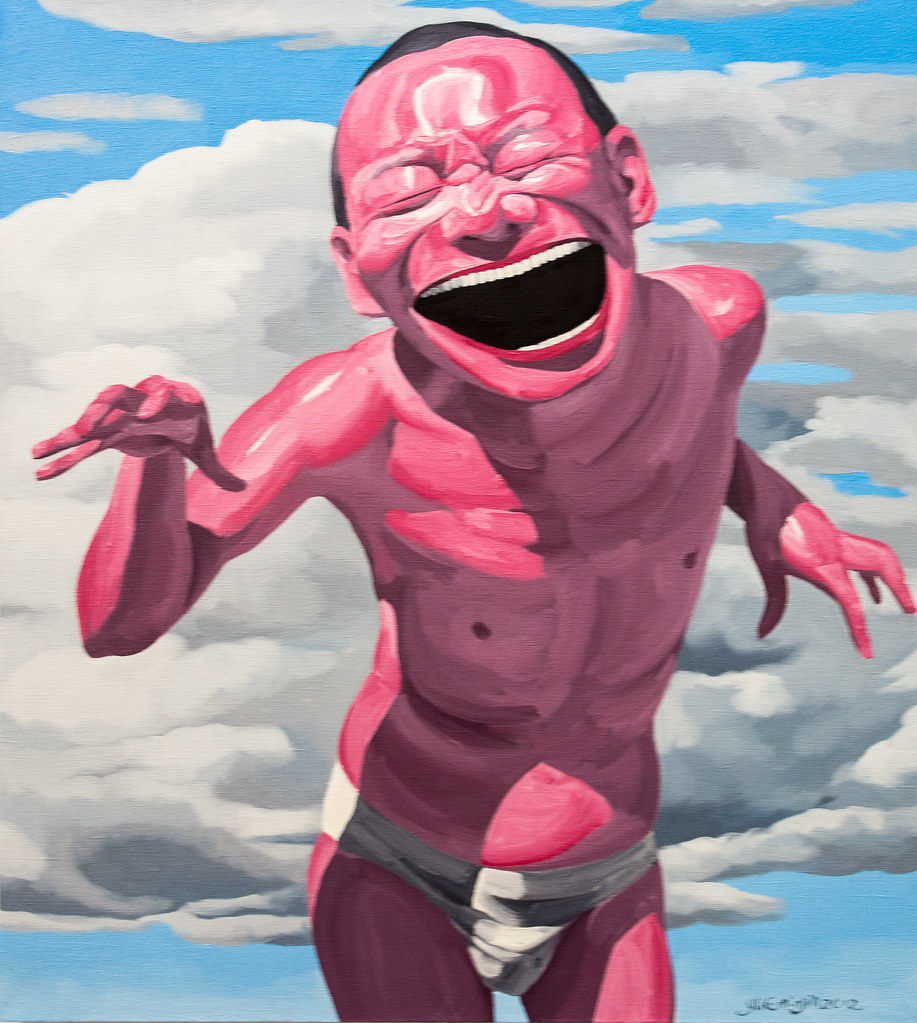 Figurative Art ranges from almost photographic to nearly non-objective, and Abstract Figurative is at the far end of that continuum. While figures are still recognizable, they are shaded, exaggerated, blurred, or distorted in some way. Like abstract art, Abstract Figurative Art draws on emotions, and the subject of the painting is often blended into a background that obscures or distorts it in an evocative way. Nevertheless, paintings start with and depict a real subject.

Figurative portrait artists insist that the portrait resembles its subject, but not in the specific and exact details of a photograph. A Figurative portrait attempts to capture more of the individual’s inner life, sacrificing superficial likeness to delve more deeply. The Presidential Portrait of Barack Obama by Kehinde Wiley is a quintessential example of a Figurative portrait.  While it portrays an unquestionable likeness of Obama, it also includes ample symbolism and is not strictly realistic. 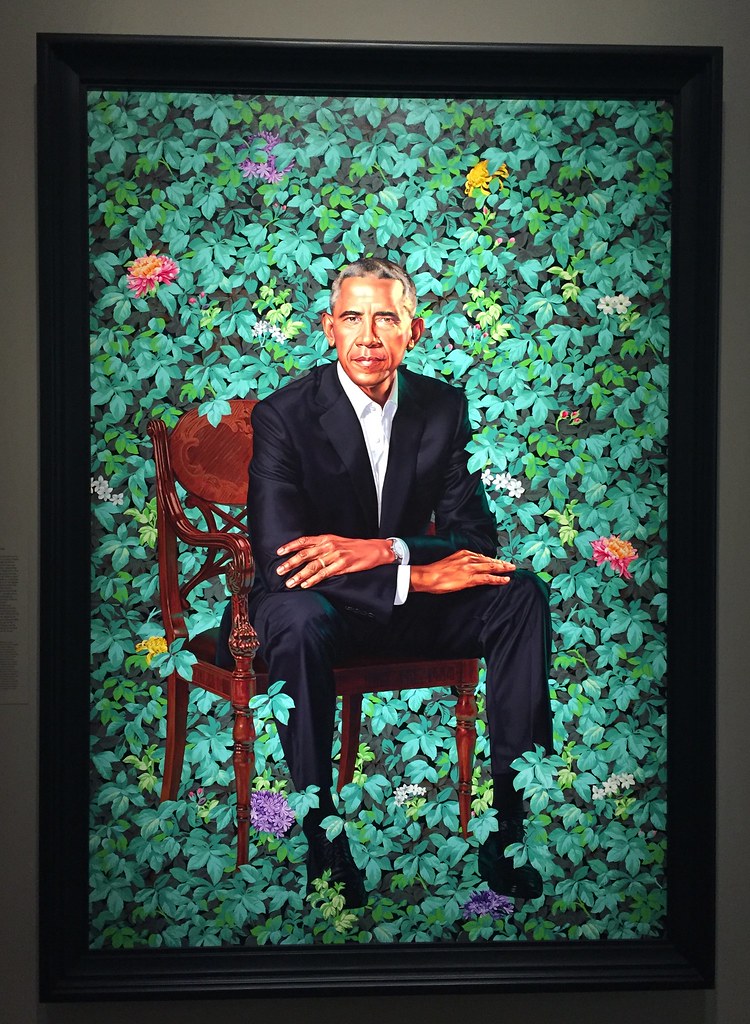 Within the past 10 years, the popularity of Figurative Art has made a distinct resurgence. This newest-of-the-new Contemporary Figurative Art is heavily influenced by previous artists like David Hockney while featuring unique styles and subject matter. This art is also created in response to and influenced by contemporary culture, resulting in pieces that are distinct from anything that has come before.

Figurative art from the 2010s and ongoing is often characterized by its bright and garish colors, crude brush strokes, and mixed imagery. It also regularly features a greater diversity of figures, responding to the previous marginalization of many people and their exclusion from the world of Fine Art. This new wave of Figurative Art is sometimes criticized as ‘bad figurative painting,’ due to its crude style as well and sometimes strange or crass imagery.

Kehinde Wiley was born in Los Angeles to an African American mother and a Yoruba father who returned to Africa after completing school, leaving Wiley’s mother to raise six children. She noticed Kihende’s artistic gifts early and committed to art lessons. After attending San Francisco Art Institute and Yale, Wiley served as Artist in Residence at the Studio Museum in Harlem.

Drawn to Figurative Portraiture, Wiley focuses on Black men, particularly from Harlem, as the subjects of his work. Although his figures wear contemporary attire, he poses them in Renaissance settings, thus questioning the traditional symbols of power. In 2016, President Barack Obama chose Wiley to paint his official portrait. In it, Obama perches on the edge of an ornate chair against an extravagant background of plants from every setting of his life. The background challenges viewers, depicting the competition for prominence between Obama-as-President and his compelling history. 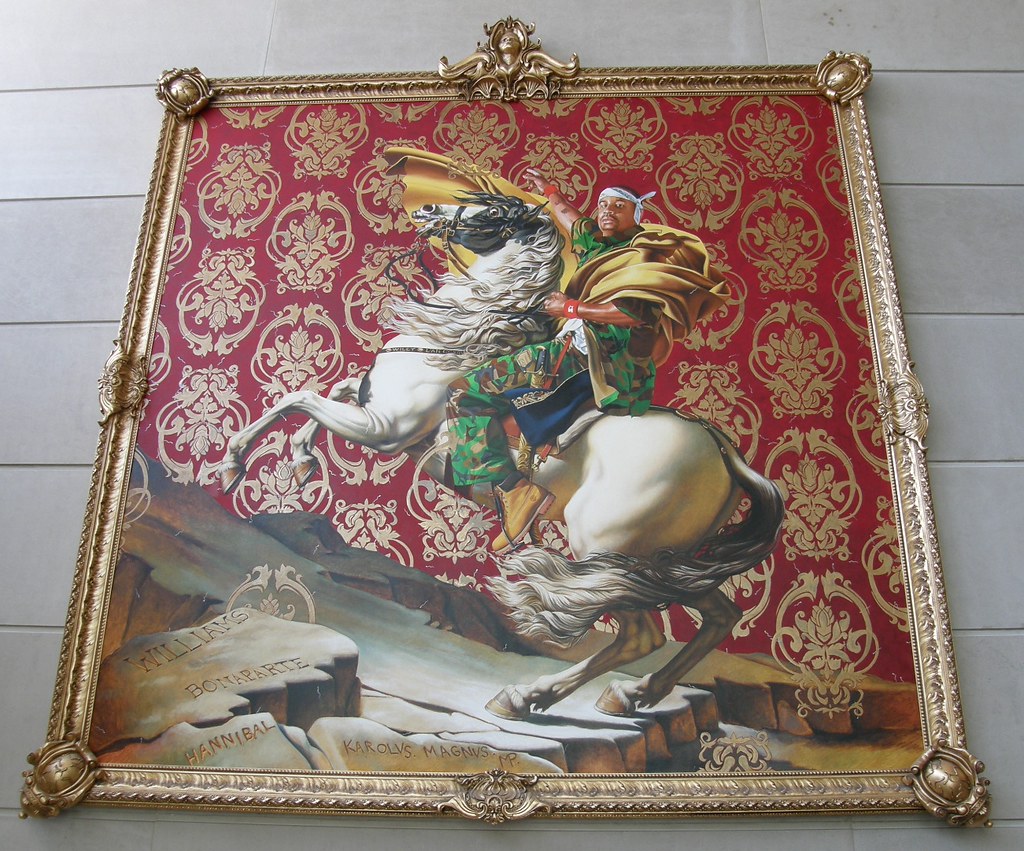 Born to a wealthy British family in Ireland in 1909, Frances Bacon became one of the most significant painters of the 20th century. Disowned at age 16 because he was gay, Bacon worked at menial jobs and moved from England to Germany and Paris, learning about art and becoming a life-long gambler. He began painting in his late twenties, and his first show was such a disaster that he destroyed all his work, a self-editing method he applied all his life.

Crucifixion (1933), his first mature work, drew on themes that became trademarks: Picasso’s biomorphs, interpretations of the crucifixion, and the Greek Furies. Though Bacon’s work is early to be considered Contemporary Art, his subjects and style left an indelible mark on modern Figuratism. Bacon’s paintings are characterized by disturbing images which range from surreal to abstract, and his style continued to evolve throughout his lifetime.

Hailed as the foremost 20th-century British portraitist, Lucian Freud, grandson of Sigmund Freud, was born in Germany in 1922 but fled to England to avoid the rise of Nazism.  Freud’s early work was influenced by German Expressionism and Surrealism, but he soon joined a loosely connected group of Figurative painters known as The School of London.

From the 1950s on, Freud focused almost exclusively on portraits, primarily nudes. He painted from live sittings and spent as much as 2000 hours on each painting. Benefits Supervisor Sleeping (1995) demonstrates Freud’s use of flesh tones and the typical pose of the reclining nude. Although they are mostly of friends and family, some portraits imply a tension between the subject and the painter. Toward the end of his career, Freud painted a series of self-portraits. His work saw great commercial success with his Boy’s Head (1952) selling for $4 million. 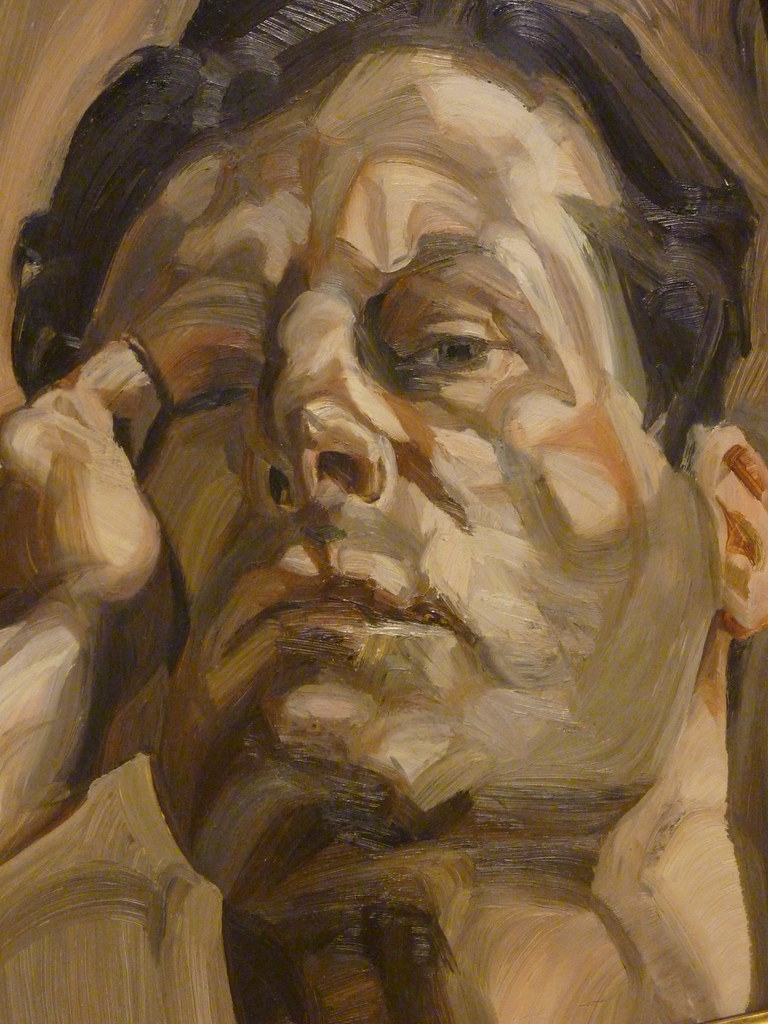 British artist David Hockney has worked in painting, photography, watercolors, faxed images, computer art and iPad drawing. Best known for his portraiture, Hockney drew and painted friends and family and completed more than 300 self-portraits. Most of his portraits are realistic and many are nearly life-sized. For several years, Hockney used the camera lucida, a 19th-century device, as a starting point for his portraits and landscapes.

One of Hockney’s more innovative techniques is the photo collage composed of polaroid shots or commercially developed film. Taking pictures of a face from different angles, he fuses the pictures to form something approaching cubism. Although he created hundreds of photographic works, he became frustrated with the limitations of photography and returned to painting.

Hockney has created hundreds of portraits and landscapes on his iPhone and iPad, including a design for the Queen Elizabeth II window at Westminster Abbey (2018). 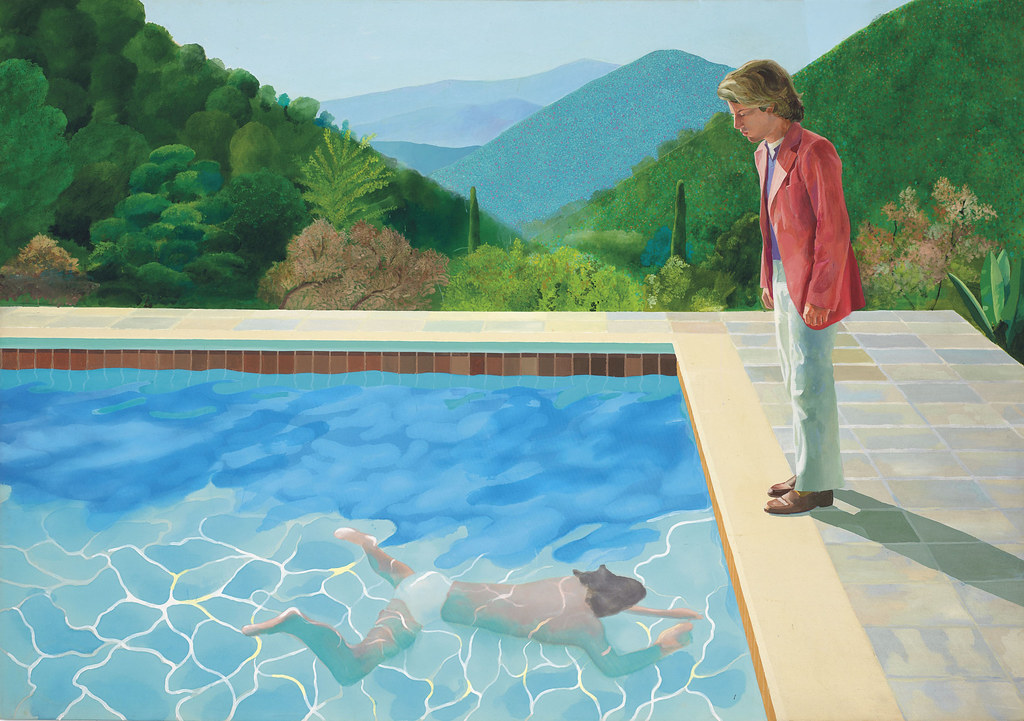 Lynette Yiadom-Boakye is a London-based figurate artist who is best known for her large-scale oil paintings; her art centers on themes of timelessness and Blackness. Although Yiadom-Boakye is a figurative artist, she is distinctly not a portraitist; none of Yiadom-Boakye’s figures are modeled from real life, instead, they are born from her memory and imagination.

Yiadom-Boakye paints figures individually as well as in pairs or groups, and she intentionally excludes many items and fashions that would tie her figures to a specific era. Yiadom-Boakye’s art is recognized for its flat or abstract backgrounds, broad brushstrokes, and muted color palettes, as well as featuring Black society. Yiadom-Boakye also emphasizes the importance of process for her completed pieces.

Her exhibit Fly in the League of the Night is currently on an international tour, having already been showcased at the Tate Britain. She was nominated for the Turner Prize in 2013.

NFTs and Beyond: 21st-Century Digital Art;

The Message, not the Medium: Feminist, Postcolonial, and LGBTQ+ Art;

Neo-Expressionism: Once More with Feeling;

The Changing Focus of Contemporary Photography;