How are clothes made? An overview of the clothes creation business. 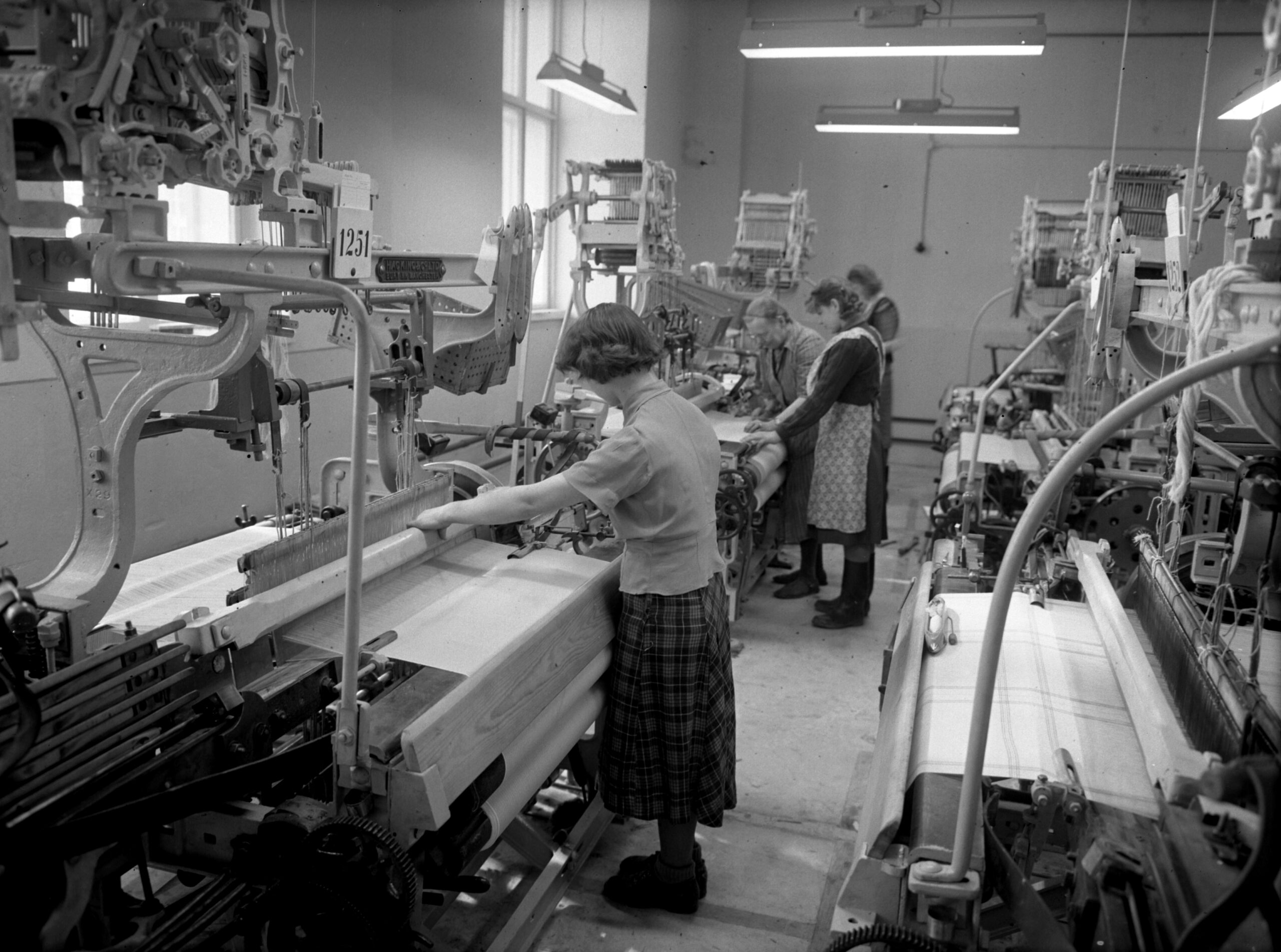 How are clothes made?

Do you ever wonder how your clothes are made? If you’ve never made a garment yourself, you might be surprised at the work that goes into every item of clothing you own. A series of steps make up the clothes-making process, from the design concept to the finished product.

There are a number of operations, but the process can generally be categorized into five steps: pre-production, planning, cutting, quality control, and delivery.

Pre-production is the process that occurs before bulk production. It includes sourcing raw materials, sampling, pattern making, garment costing, and buyer approvals. A knit sweater, for instance, would require the sourcing of yarn from suppliers at a reasonable price. Once secured, the production planning stage begins, where the planning department allocates the design to a sewing line and fixes dates for the garment factories to begin an order to ensure delivery on time.

Next, the cutting begins. Pattern cutting is the process of creating the basic patterns that will make up the design. Factories cut the fabrics ready for sewing, following specific instructions from the design team for measurements and sizing. Once complete, the quality control team inspects the garment samples to ensure quality before the components are sewn together.

In the final stage, the order is delivered to the client when the garments pass the quality control checks. 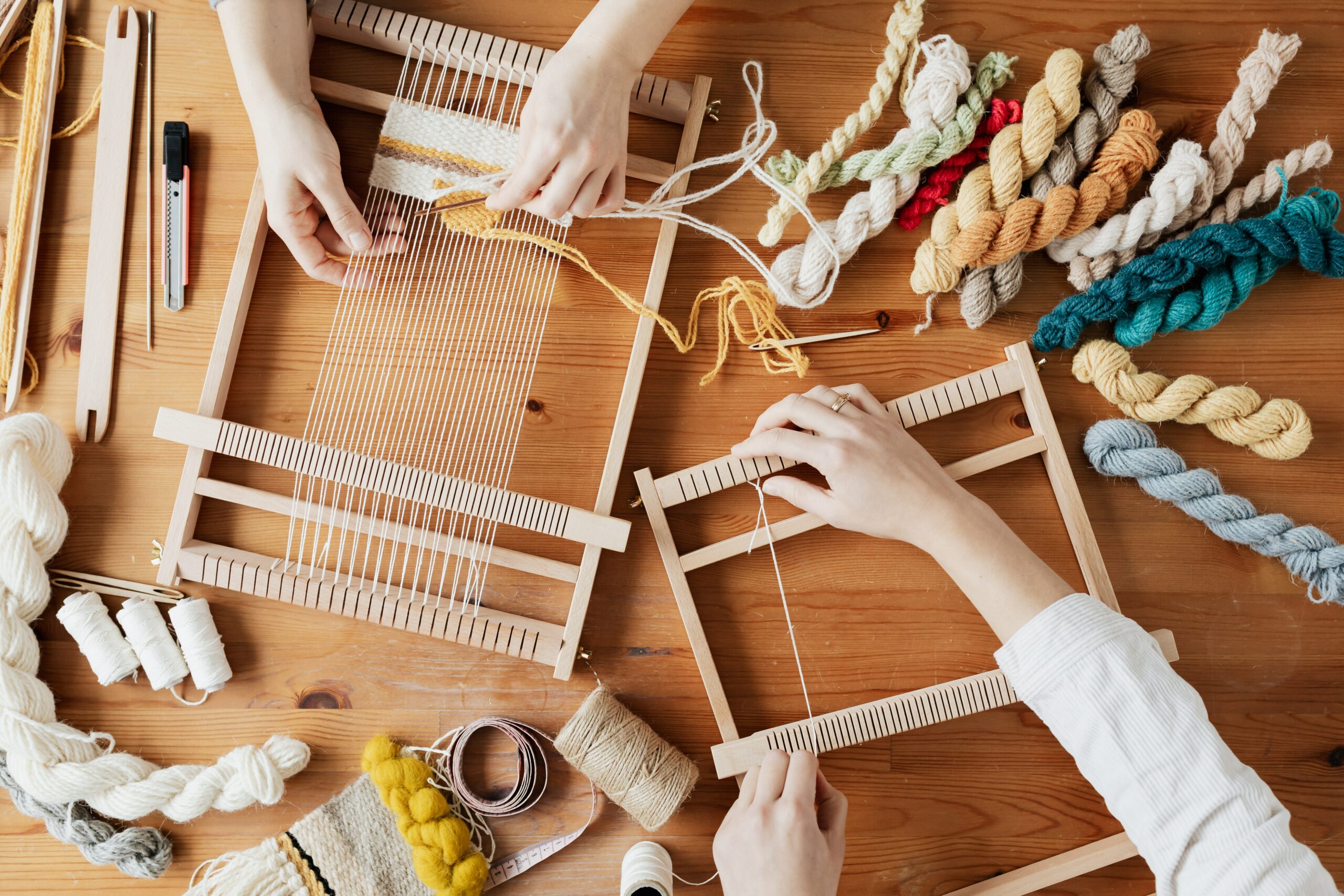 The Industrial Revolution transitioned from conventional means of making goods by hand to using machines instead. It was a period of new technology and advancements in manufacturing that occurred in the 18th century and permanently changed society.

It had a significant impact on the textile industry. Before the Industrial Revolution, clothes and textile goods were produced on a small scale. It was a slow and humble process, with many people making goods at home and on their farms. Industrialization changed all this, enabling the mass production of goods with new inventions that innovated the industry.

For example, in 1764, James Hargreaves invented the spinning jenny, a multi-spindle spinning frame. In 1769, Richard Arkwright improved on this further and created the water frame, a spinning frame powered by a water wheel. In 1785, Edmund Cartwright created the power loom. The power loom mechanized the loom function, speeding up the weaving process. Eli Whitney’s cotton gin removed cotton fibers from their seeds, and the Jacquard loom by Joseph Marie Jacquard allowed the weaving of complex designs. 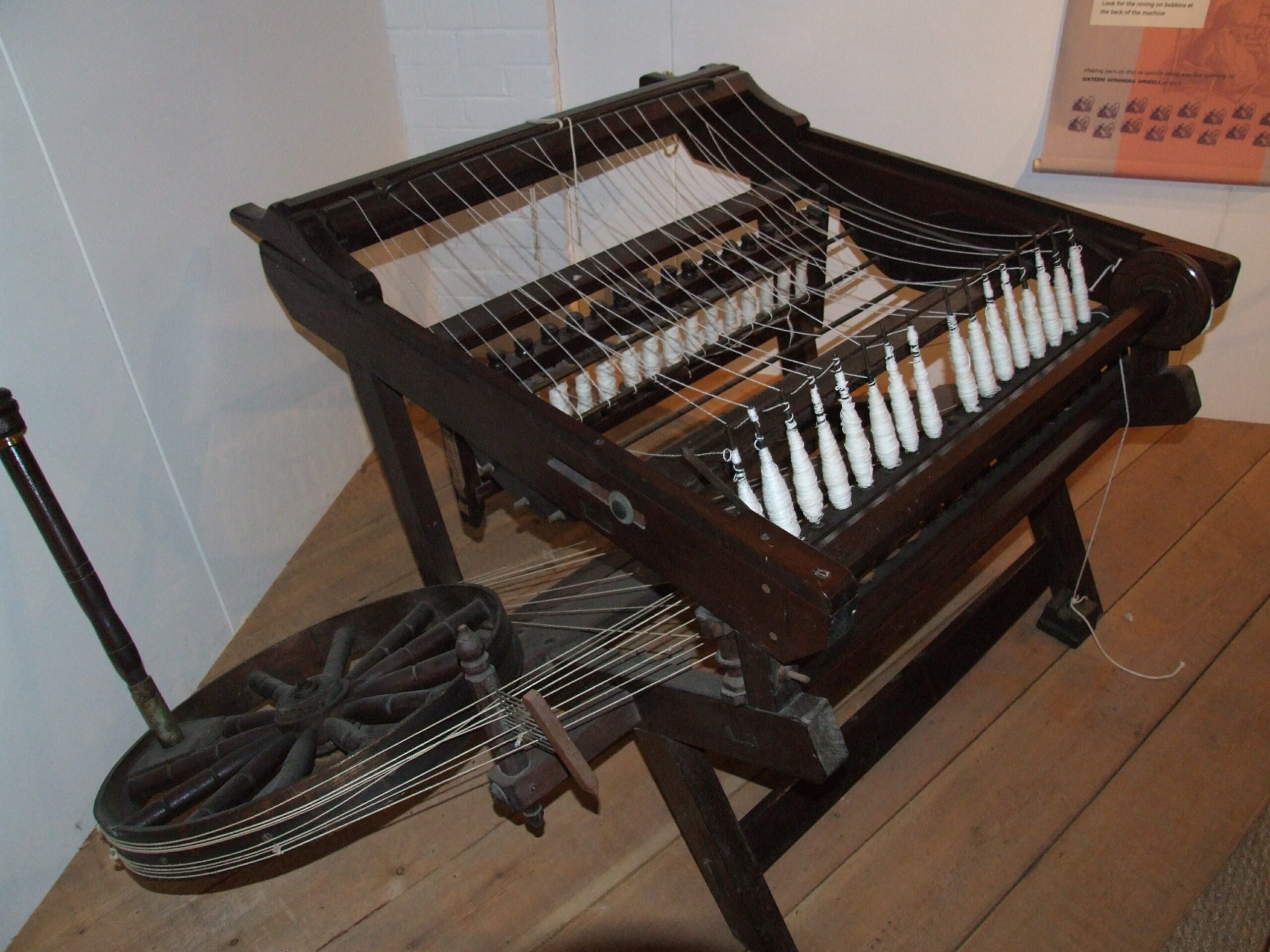 Textile mills marked an important shift in manufacturing processes. The introduction of mills took clothes and textiles creation to the next level, transforming the humble craft into a factory-based model driven by speed and productivity. The new system enabled many textile goods to reach the masses, allowing the middle and working classes to afford more clothes. It kept the production costs down and opened up many new jobs.

The first mill was established in 1740 after English machinist John Kray developed the first step toward automatic weaving machines. He created the flying shuttle—a machine which allowed a single weaver to make wide fabrics, whereas previously, wide fabrics required two weavers. After Richard Arkwright invented the water frame in 1769, he went on to build Cromford Mill in 1771, the first water-powered cotton mill.

Before the sewing machine, all sewing was done by hand using a needle and thread, no matter the project. The sewing machine entered the world in the late 18th century and revolutionized how humans make clothes. This device offered a much more efficient way to make garments, and women could now make clothes at home quickly and easily.

Englishman and cabinet maker Thomas Saint is credited with designing the first ever sewing machine in 1790. However, his design was on paper only, and he never actually built the device. His original drawings depicted a machine for stitching leather and canvas, and a replica based on his design was constructed in 1874 by William Newton Wilson.

Several inventors patented the sewing machine, but most inventions were unsuccessful. It was in 1830 when the first successfully-functioning sewing machine arrived, patented by the French inventor Barthélemy Thimonnier. It was made from wood and used a barbed needle to create a chain stitch. 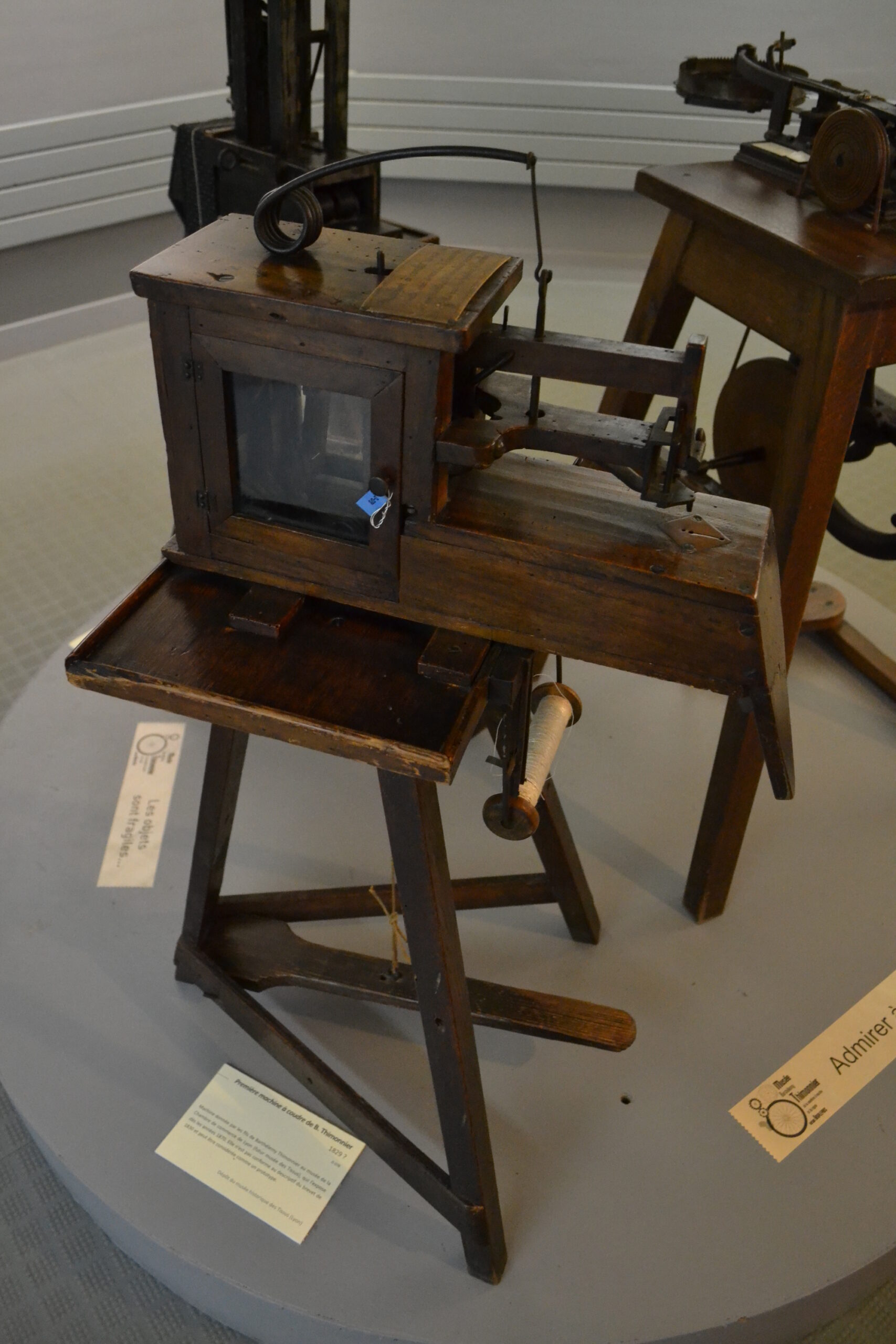 As the textile industry blossomed with innovations, another high-tech discovery occurred. In 1856, English chemist William Henry Perkin accidentally synthesized mauveine, or aniline purple, while trying to produce quinine to treat malaria. This created the first organic synthetic dye in history. His finding paved the way for the synthetic dye and modern chemical industry. Perkin filed a patent for the process and made his fortune.

Before Perkin’s creation, only the wealthy had color in their wardrobes because fabric dyes were expensive to make. Dyes were derived from natural sources, such as plants, fungi, and insects. The color purple, in particular, symbolized wealth as the purple hue was the most expensive to produce. The arrival of mauveine was an exciting new development for ordinary people as beautiful purple fabrics could now be made and sold for a smaller cost. 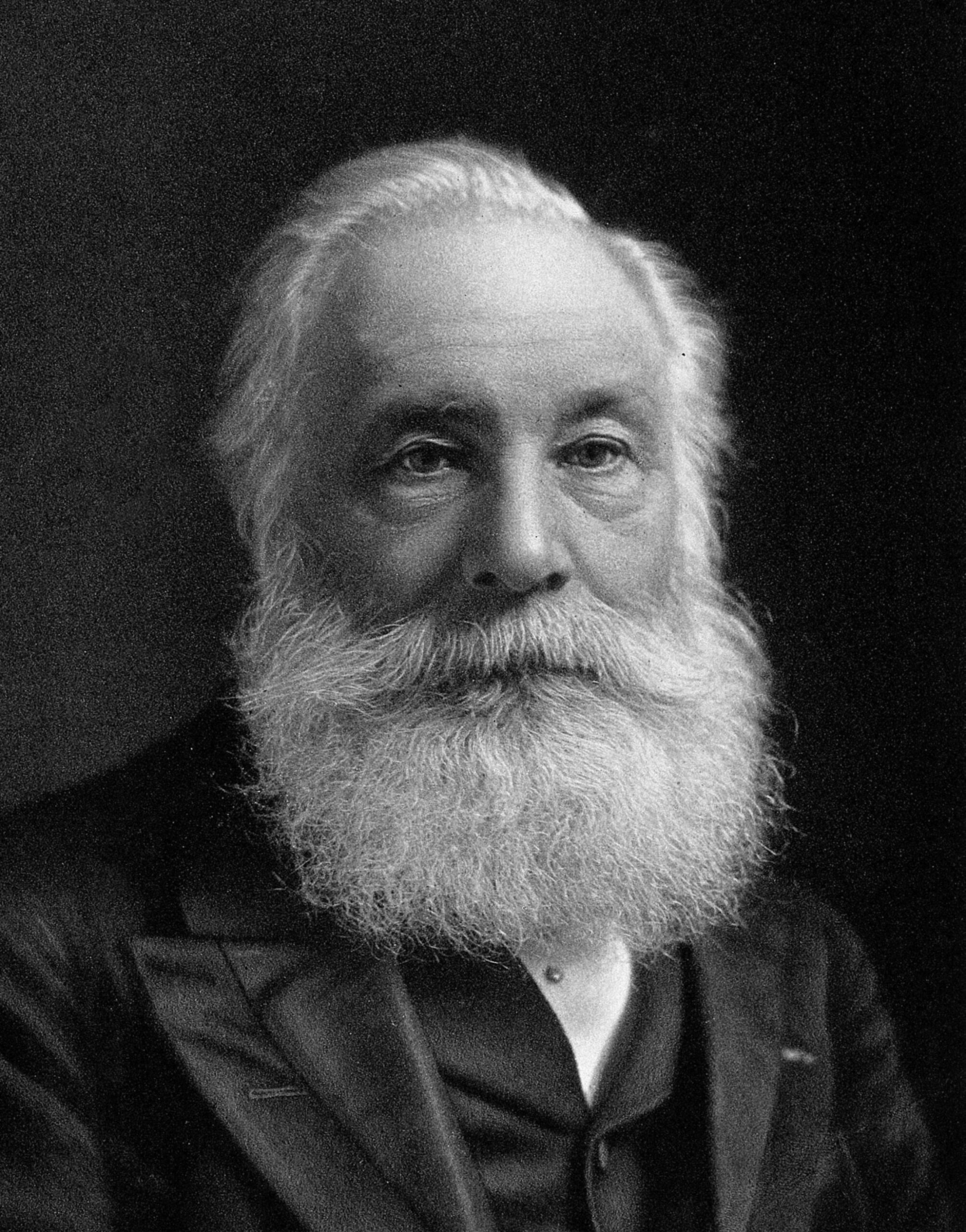 The groundbreaking concepts emerging throughout history didn’t stop in the past. Fashion design and garment construction continue to develop and reform as fresh minds conjure new ideas. While the Industrial Revolution skyrocketed manufacturing processes, manufacturers in the 21st century have the help of digital technology to aid progression.

Although the way we make clothes in the digital age hasn’t changed much, there are new advancements that eliminate design restrictions and allow more control. For example, 3D printing transforms a three-dimensional digital design into a physical product. It is a one-step manufacturing process that saves money and time and reduces waste. Elsewhere, digital knitting is another unique process that turns 3D designs into knitting patterns. 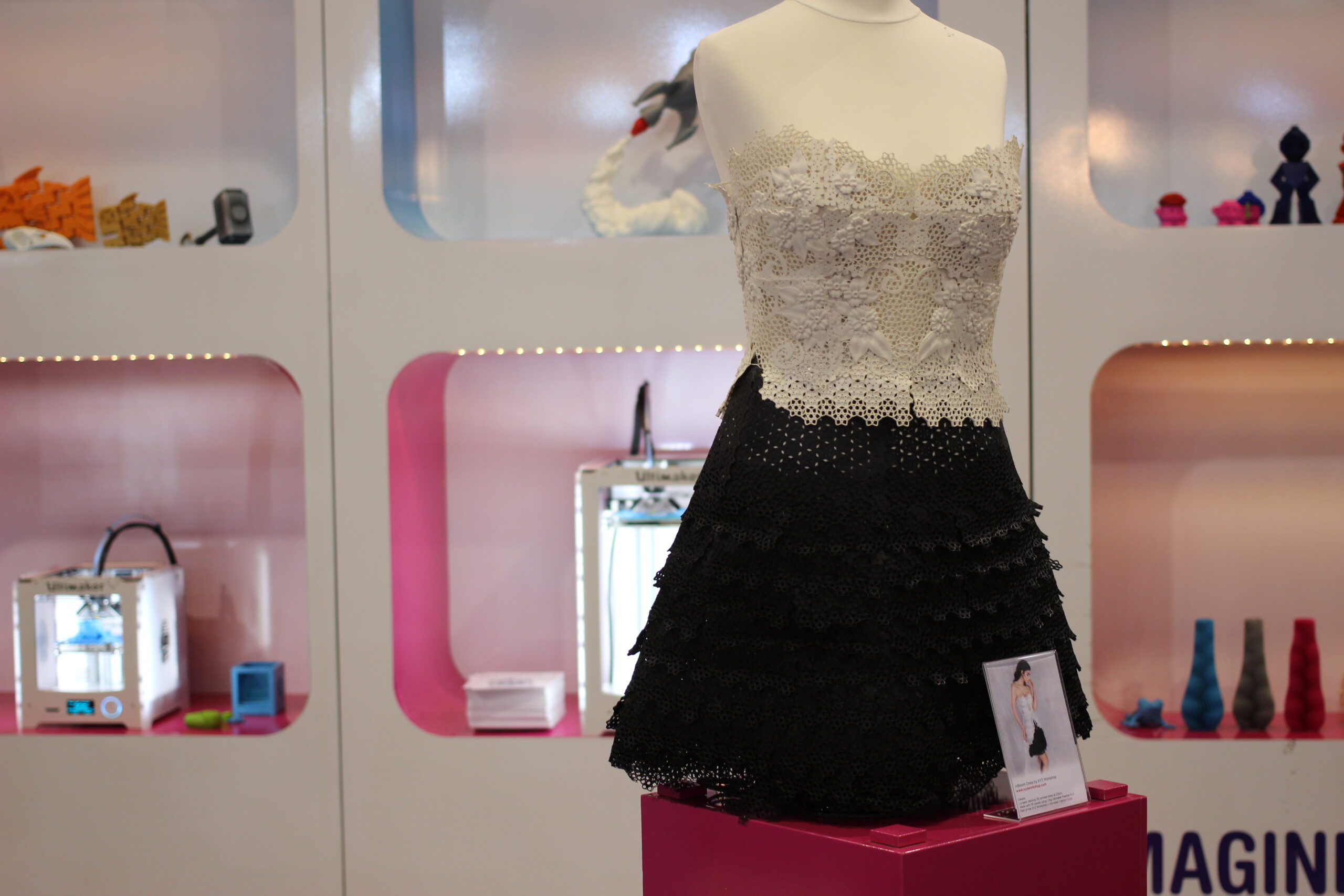 While new inventions uplifted the clothing manufacturing industry and delivered multiple positive changes, these techniques inevitably led to fast fashion. Fast fashion emerged in the 1990s with the mass production of cheap clothing. The New York Times coined the phrase in 1989 when discussing the revelation from retailer Zara about how fast they were making clothes.

Fast fashion describes the business model of copying clothes from the catwalks and high-fashion houses, as well as what celebrities and TV stars have been wearing, mass producing them, and bringing them to stores almost immediately for a low price. These clothes meet the continuous demand for accessing the latest trends.

H&M, Gap, Topshop, and Zara were among the first fast fashion retailers to emerge.

The trouble with this business model is its catastrophic impact on the environment. Low quality promotes the idea that clothes are disposable. People no longer take care of the clothes they buy as they always chase the next trend. Reportedly, 64% of garments made each year end up in landfill, with one in two people throwing their clothes in the trash. 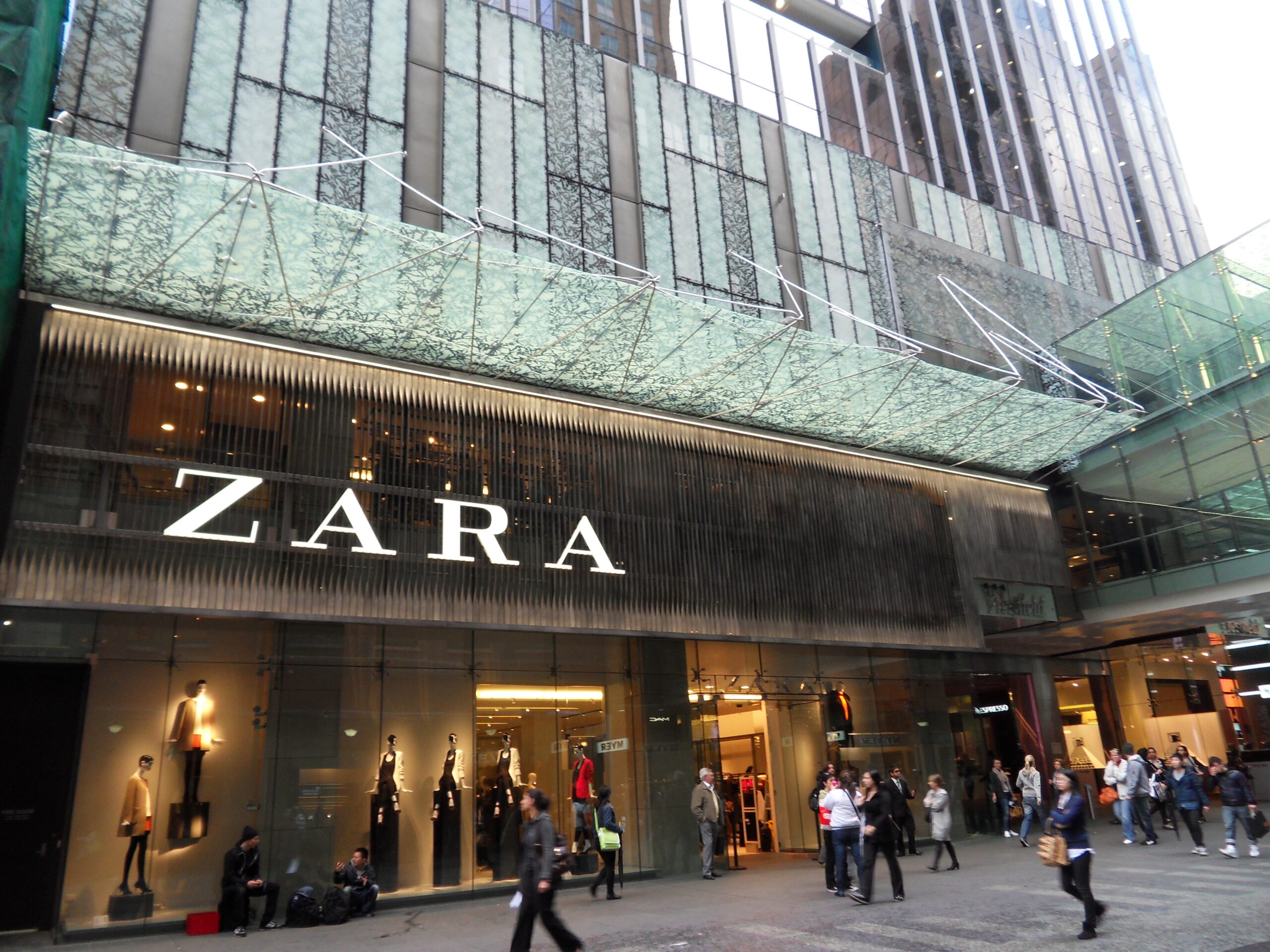 In contrast to fast fashion, the slow movement has welcomed the rise of slow fashion. Slow fashion is a considered approach to clothes making that differs entirely from fast fashion practices. It focuses on well-made clothes produced with minimal harm to the environment. It takes into account all aspects of the supply chain to minimize waste, reduce pollution, respect people and nature, and move away from the damaging effects of instant gratification.

In essence, slow fashion goes back to basics. Fashion was always slow before the Industrial Revolution hit. People took the time to make their clothes fit perfectly and last a lifetime. They took pride in what they wore and mended any damages should they occur.

Fortunately, consciousness is growing, and people are becoming more mindful of their fashion choices. Society as a whole is moving toward a slower way of living with the rise of mending, recycling, upcycling, second-hand shopping, and more mindfulness about brands.

One example of a brand following slow fashion principles is the American clothing brand Reformation, offering 100% carbon neutral items and ensuring sustainability is at the core. 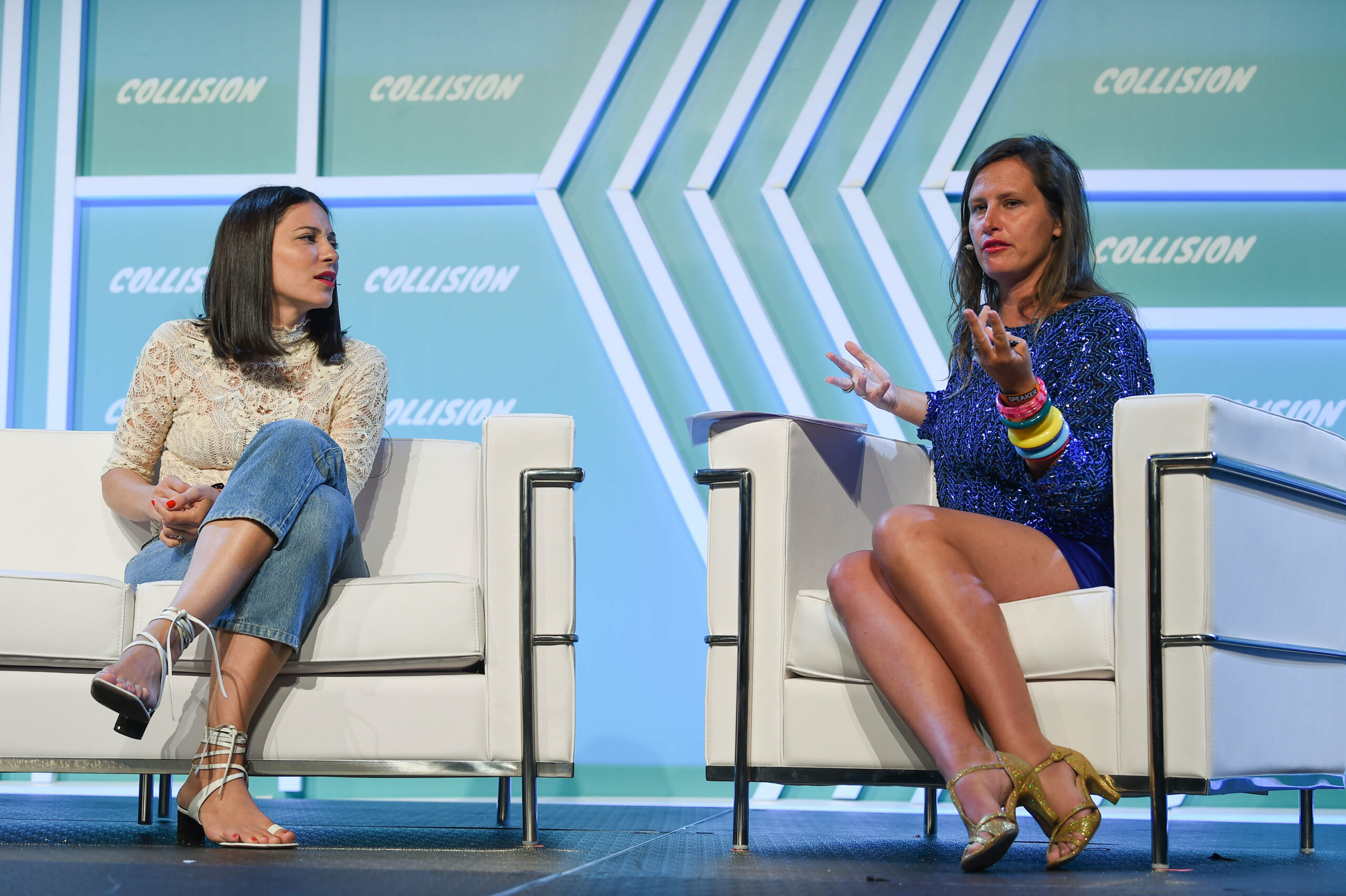 More than 60% of clothes today are made in developing countries, with 65% of the world’s garments manufactured in China. It is the world’s largest goods manufacturer and importer of textiles, and is sometimes referred to as the ‘world’s factory.’ According to the National Bureau of Statistics, a whopping 23.54 billion garments were produced there in 2021. The country is favored for its skilled workforce and low labor costs, attracting both fast fashion and high-end brands.

Over 60% of clothes today are made from synthetic materials, including acrylic, elastane, and nylon. Polyester is the most popular material. Unfortunately, these synthetic fibers are made from chemicals derived from fossil fuels, contributing to fashion’s enormous carbon footprint.

Fashion has never been under as much scrutiny as it is today. The spotlight is shining on the industry as consumers demand more transparency about where their clothes are made and who is making them. 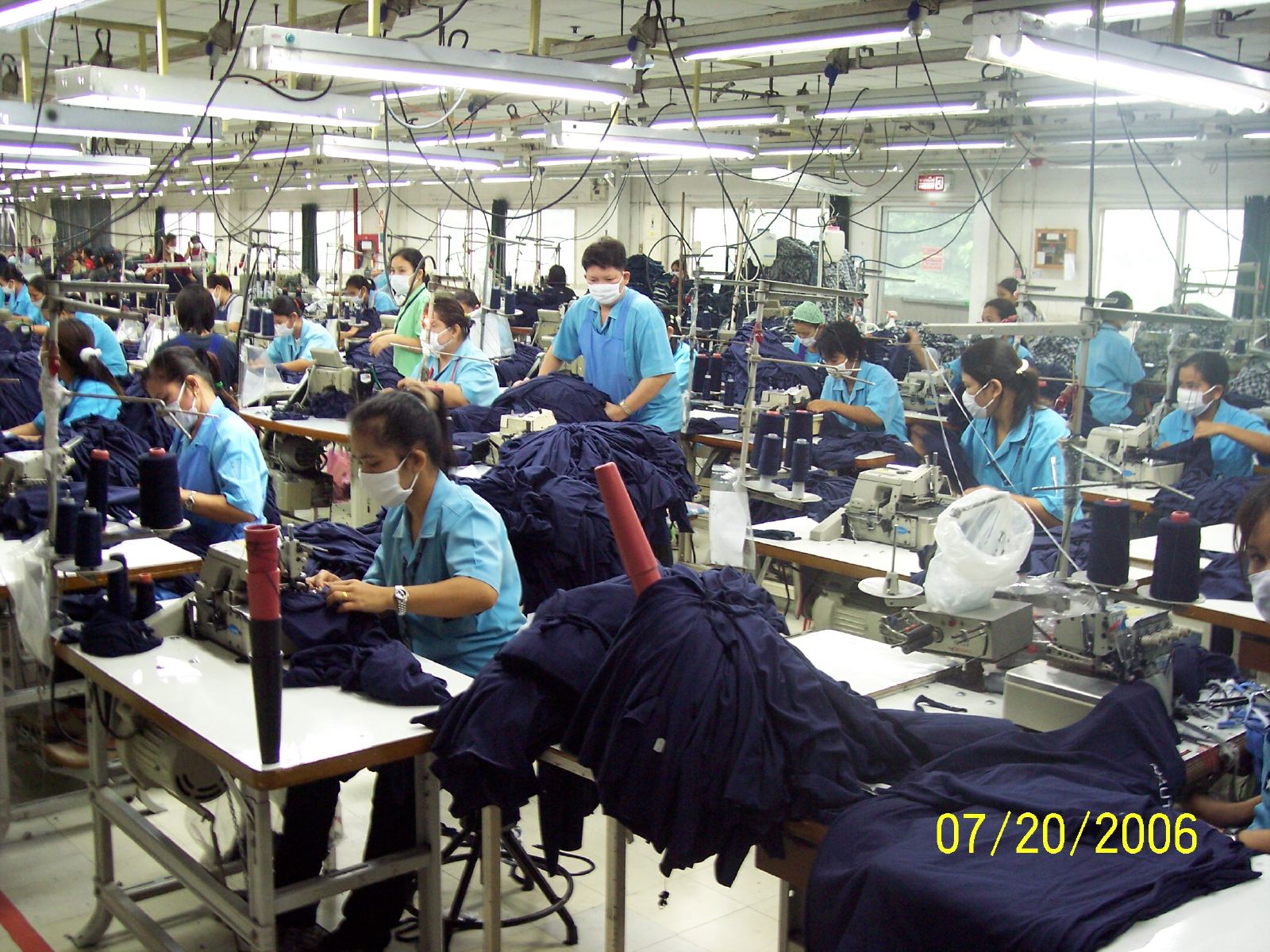