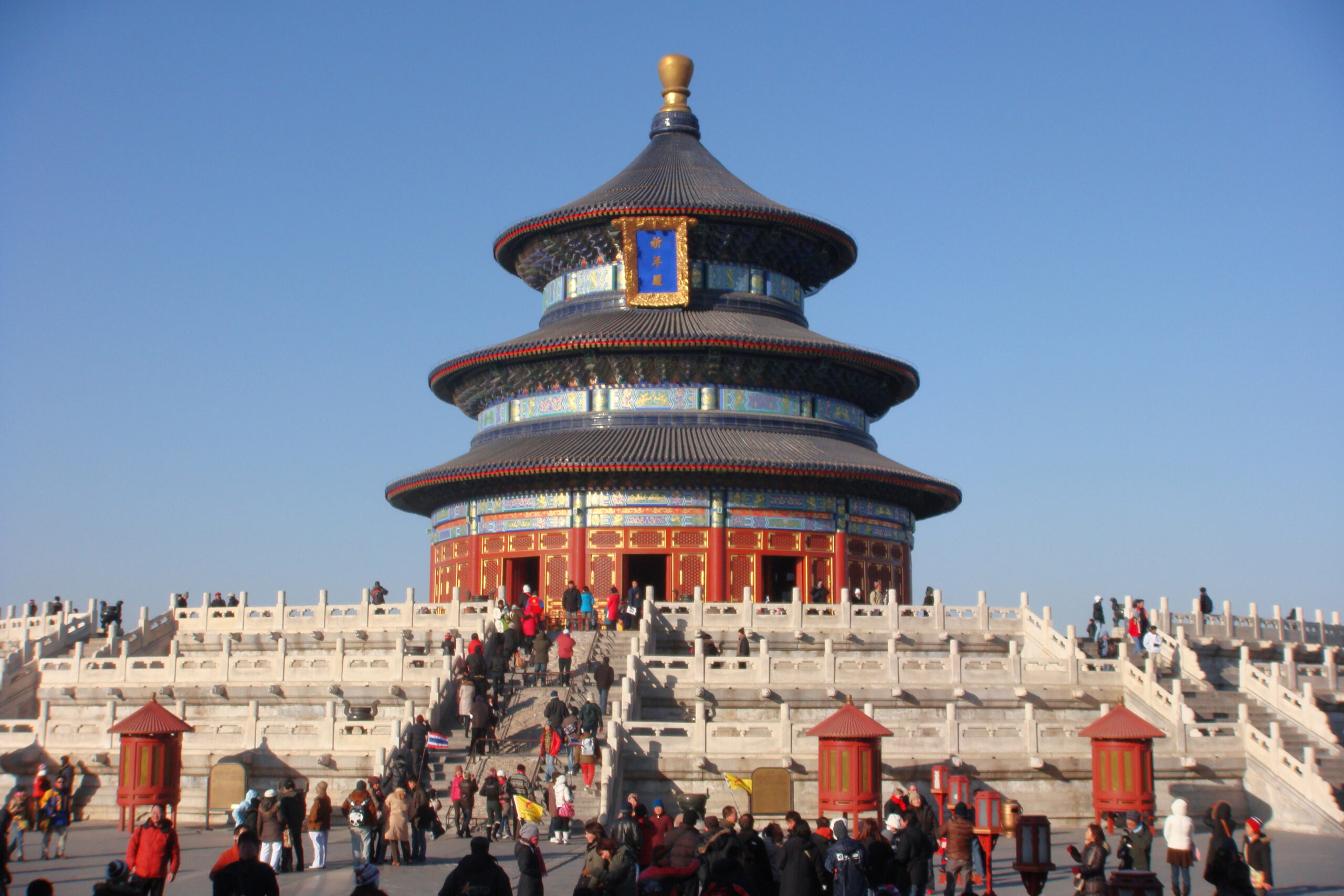 Asian architecture, dating thousands of years before the Common Era, was some of the most sophisticated in the world, with indoor plumbing appearing as early as 3000 BCE. Asian architecture characteristics developed differently in various parts of Asia, with Buddhist, Hindu and Sikh architecture all adopting unique styles and forms.

Ancient Asian architecture was affected by a variety of factors, including religion, empire, and regional neighbors. For example, Japanese architecture has had a long and largely consistent history but, being an island separated from mainland Asia, had little impact on other styles. In contrast, Chinese architecture had a tremendous impact on surrounding regions.

In 1100 CE, Song Dynasty architect Li Jie completed the Yingzao Fashi, a book of Chinese architecture that set the standard for design and construction for the next 300 years , the resulting work serving as a launching point for many regional Asian architecture styles.

Chinese architecture has clear characteristics that hold the tradition together across time and space. Made primarily of thatch and timber, magnificent early cities have disappeared, leaving footprints that reveal an extraordinary level of planning.

Distinctive Asian architecture was fairly well-established in China by the Imperial Period, 1250 BCE. Chinese architectural style has remained largely consistent through the centuries and across a wide geographic area, due in part to their well-developed architectural standard.

As even the grandest imperial buildings were made of wood, most surviving structures date only as far as the Ming Dynasty, which lasted from 1368-1644.

Chinese architecture is defined by a number of key features, including bilateral symmetry that prioritizes being symmetrical from left to right, enclosed open spaces, and feng shui – a directional hierarchy for arranging spaces to harmonize individuals with their environment.

With some notable exceptions, such as pagodas, most structures had a single story. Colors were used symbolically, with yellow reserved for emperors, red promising good fortune, and green representing wealth, growth and harmony. 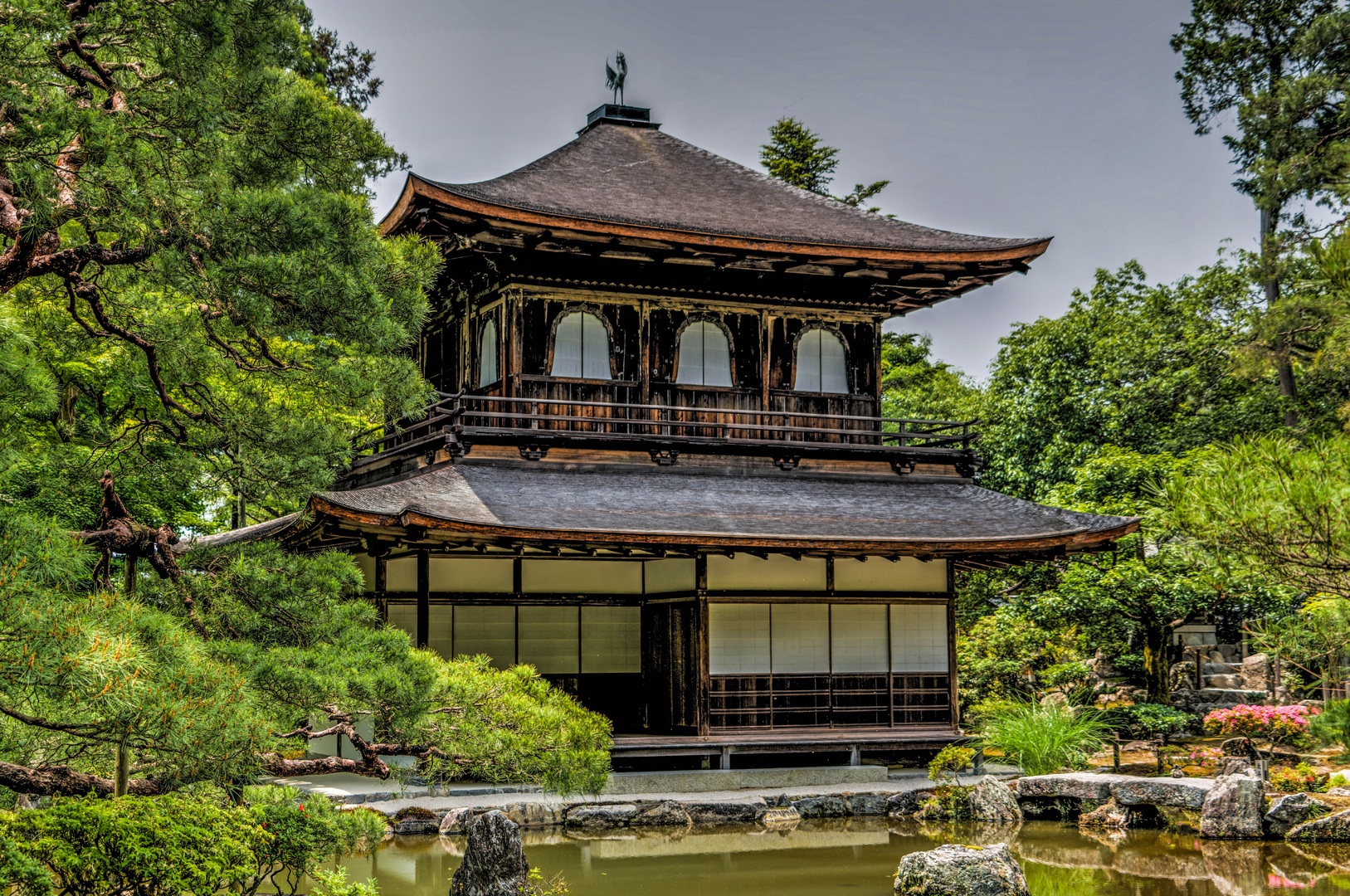 The hip and gable roof originated in China during the Eastern Han Dynasty (25-220 CE) before spreading throughout Asia. Originally used for temples, palaces, and gardens, it is now also used for Taoist and Buddhist shrines.

Hip and gable roofs use a combination of the 2 roof forms, with a hipped roof – a roof that slopes down on all sides – and 2 gables – a triangular portion of wall between intersecting roofs – on opposing sides.

A Chinese hip and gable roof, also known as a xieshan roof, has 9 ridges, and a peristyle, or continuous porch, formed by a row of columns surrounding the building. The double-eaved xieshan roof with colored ceramic tiles and heavy ornamentation at the end of the eves is the stereotypical Chinese architectural form. 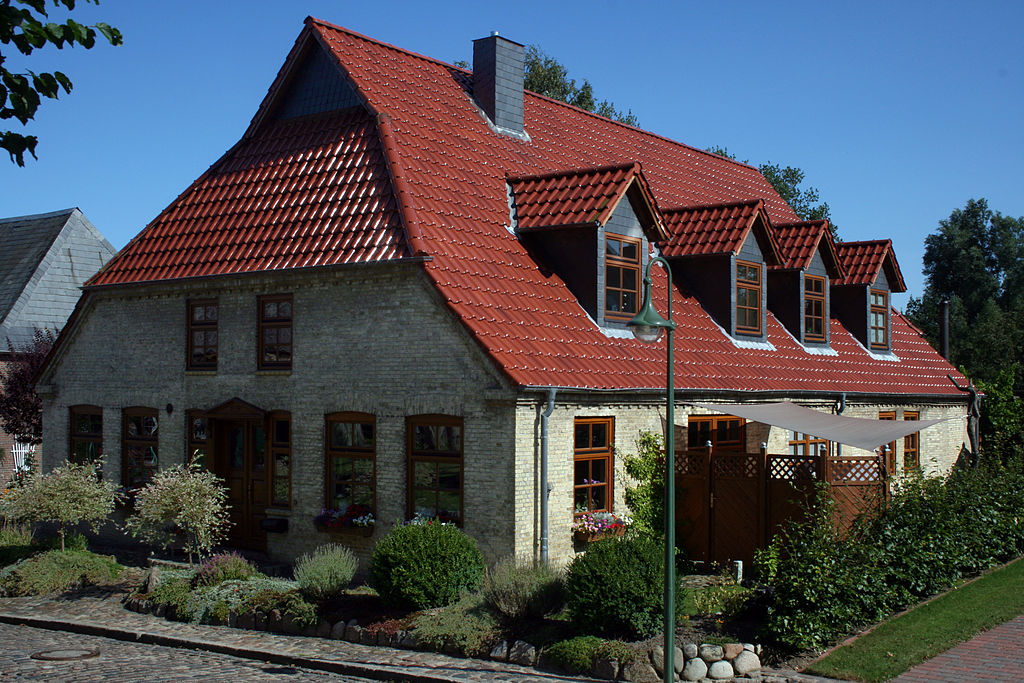 Originating in India, Buddhist architecture consists of viharas (monasteries), stupas (places to venerate relics or texts), and chaityas (temples). The oldest Buddhist structures are the ‘caves’ or ‘grottos,’ which are viharas cut from stone with a central hall connected to small cells.

More generally, vihara, refers to any living quarters for monks with an open, shared courtyard.

Often connected to monasteries, stupas are bell-shaped, solid structures without entrances and with holy relics or texts hidden inside in the walls or core. The earliest stupas were sculptures, but the form became increasingly elaborate. The oldest existing stupa was built by King Ashoka (273-236 BCE).

The grandest examples of Buddhist architecture are chaityas or temples containing at least one statue of Buddha with space for incense, fruit, flowers and worshippers. Larger temples have multiple statues and may include displays of the bones of holy people, lecture halls, libraries, shrines and large bells. 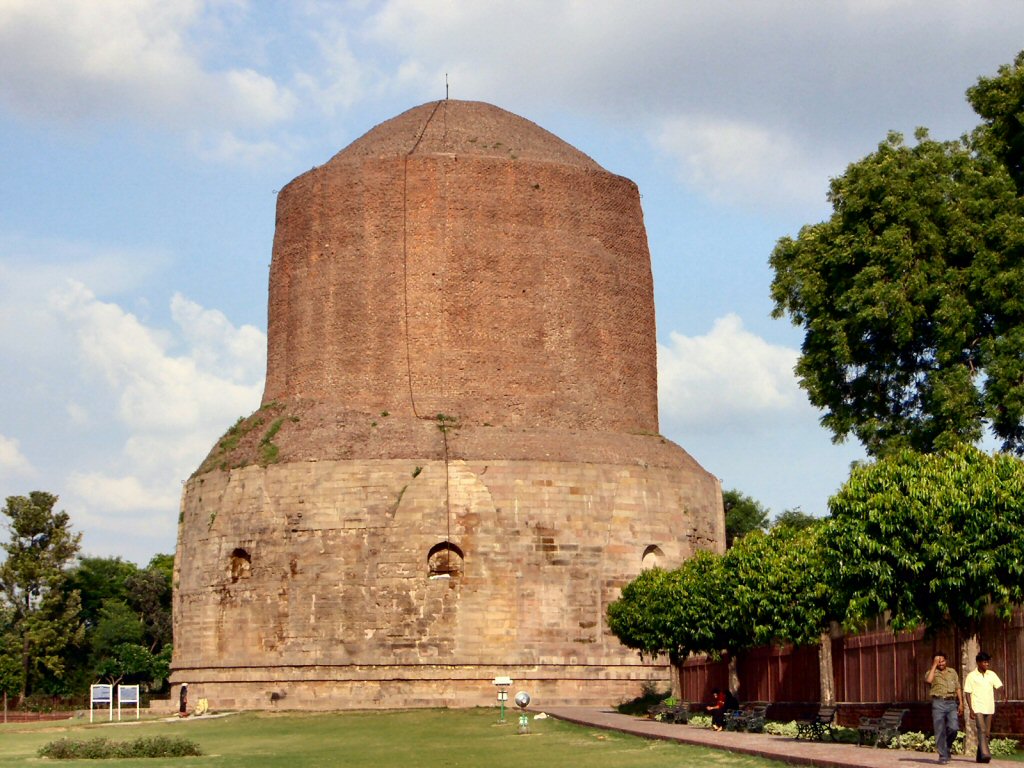 Byzantine architecture emerged when Constantine the Great rebuilt Byzantium and filled it with churches and monasteries, establishing the eastern center of Orthodox Christianity.

Constantinople became the focal point of an artistic perspective different from that of Western Europe. Most notably, Byzantine architects retained the ability to build large domes, typically made of light and porous stone or pottery and situated on pendentives, 4 concave triangles, or squinches, semi-circles that open into octagons.

Byzantine churches had a symmetrical floor plan with square walls and flat roofs. In contrast to the Latin cross design, the Greek cross had equal arms. Columns, rather than walls, were used to support the weight of the roof, creating larger, lighter enclosed spaces. Interiors were embellished with intricate mosaics.

Hagia Sophia in Istanbul, which saw some recent controversy when the Turkish government declared it a mosque in 2020, is a quintessential Byzantine building.

Western architects encountered the wonders of Byzantine architecture during the crusades, reshaping their views of what was possible. 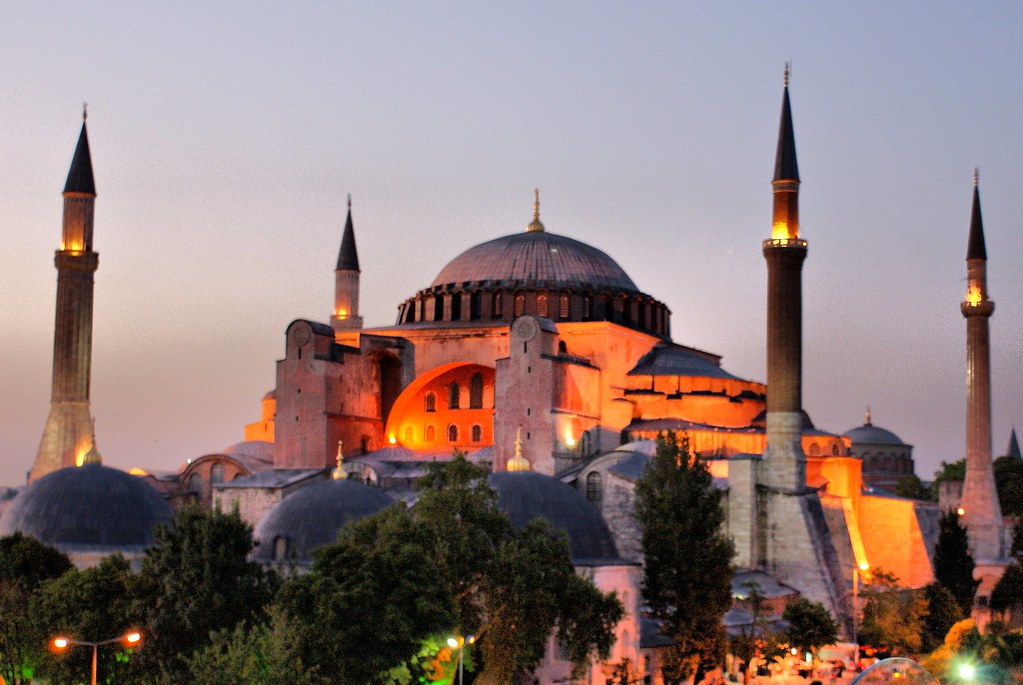 Architecture in Islam emerged in the 800s and spread with the growth of Islam. One distinctive element of this style is the minaret, a tall thin building with small windows and an enclosed staircase that facilitates the call to prayer and is attached to a mosque. Ornate domes with muqarnas vaulting – often with a superimposed pointed-arch structure commonly referred to as ‘honeycomb’ or ‘stalactite’ design – are also quintessential Islamic features.

This vaulting adds complexity to the otherwise unadorned space inside the dome.

Islamic architects use 4 styles of arches: First there is the pointed arch, which looks similar to a gothic arch though wider and shallower.

Second, the ogee arch has the same basic construction as a pointed arch, but the crown has 2 s-shaped lines that create a more pronounced point at the top.

Third, the horseshoe arch, sometimes known as a keyhole arch, is wider at the top – like a keyhole – and rounded. This style is typical of Moorish architecture.

Finally, the multifoil arch features a scalloped design with a series of small arches in the crown. Architecture in Islam is also known for its colorful ornamental details created from jewel-like tiles, perhaps the most striking architectural element. 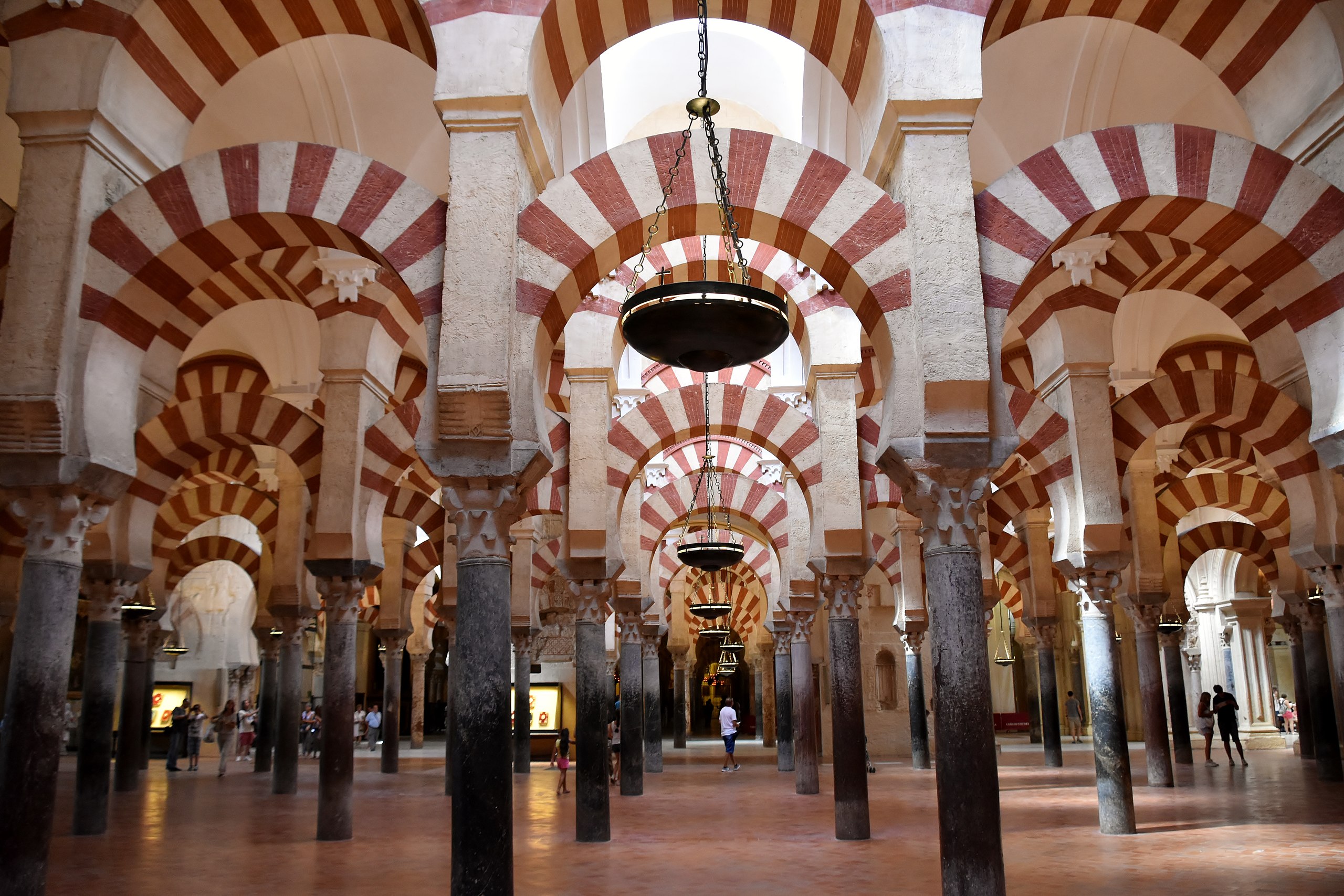 The Umayyad (661-750) and Abbasid (750-1227) Caliphates were great periods of architectural development. The Umayyad era produced the Dome of the Rock in Jerusalem, a pinnacle of Islamic architecture.

During the Abbasid period, the Islamic capital moved from Damascus to Baghdad and then to Samarra, further separating Islamic art from Mediterranean influences and adding elements from Eurasia, China and India.

The caliphate’s architectural innovations continued to spread throughout the Islamic world long after its political influence ended. 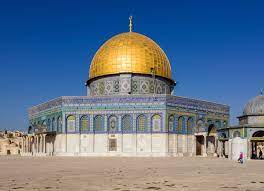 Umayyad architects also introduced the method of covering diaphragm arches with barrel vaults, a series of arches that create a rounded ceiling.

A common feature of mosques throughout the Islamic world is a system of squinches – a construction used to fill the angles of a square room so that it will accommodate a round dome. This technique originated with the Sasanians and passed to architects in eastern Islam.

The complex structure creates an ornamental pattern that hides the weight of the dome.  Ribbed vaults with a spherical dome are the characteristic architectural form of eastern Islam. 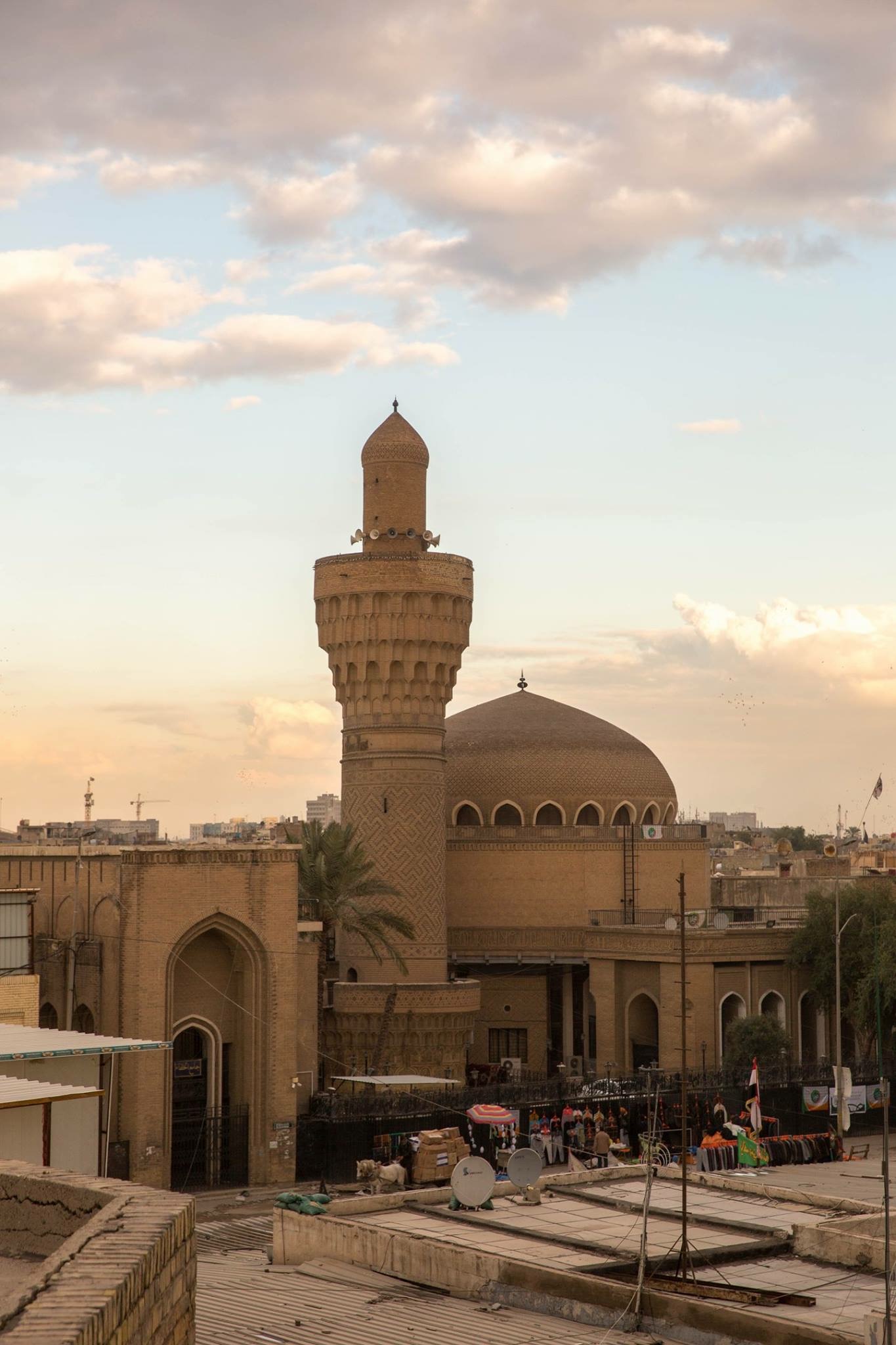 Built between 1406 and 1420, the Temple of Heaven is a masterpiece that impacted architecture in the Far East for centuries: the entire area is 4 times larger than the Forbidden City, built by the same emperor.

It is a beautiful circular building covered in blue glazed tiles, having 6 ‘heavenly’ gates and connected to other buildings in the temple complex by the Vermillion Steps Bridge.

The Hall of Prayer for Good Harvests is a 3-gabled circular structure built on a marble stone base and made entirely of wood with no nails.  Painted gold and green, it has triple eaves, and a highly symbolic interior design.

The Circular Mound Altar is a 3-level platform of lavishly decorated marble designed to carry sound over long distances. Since circles symbolize heaven and squares symbolize earth, the design of the temple grounds symbolizes the connection between heaven and earth. 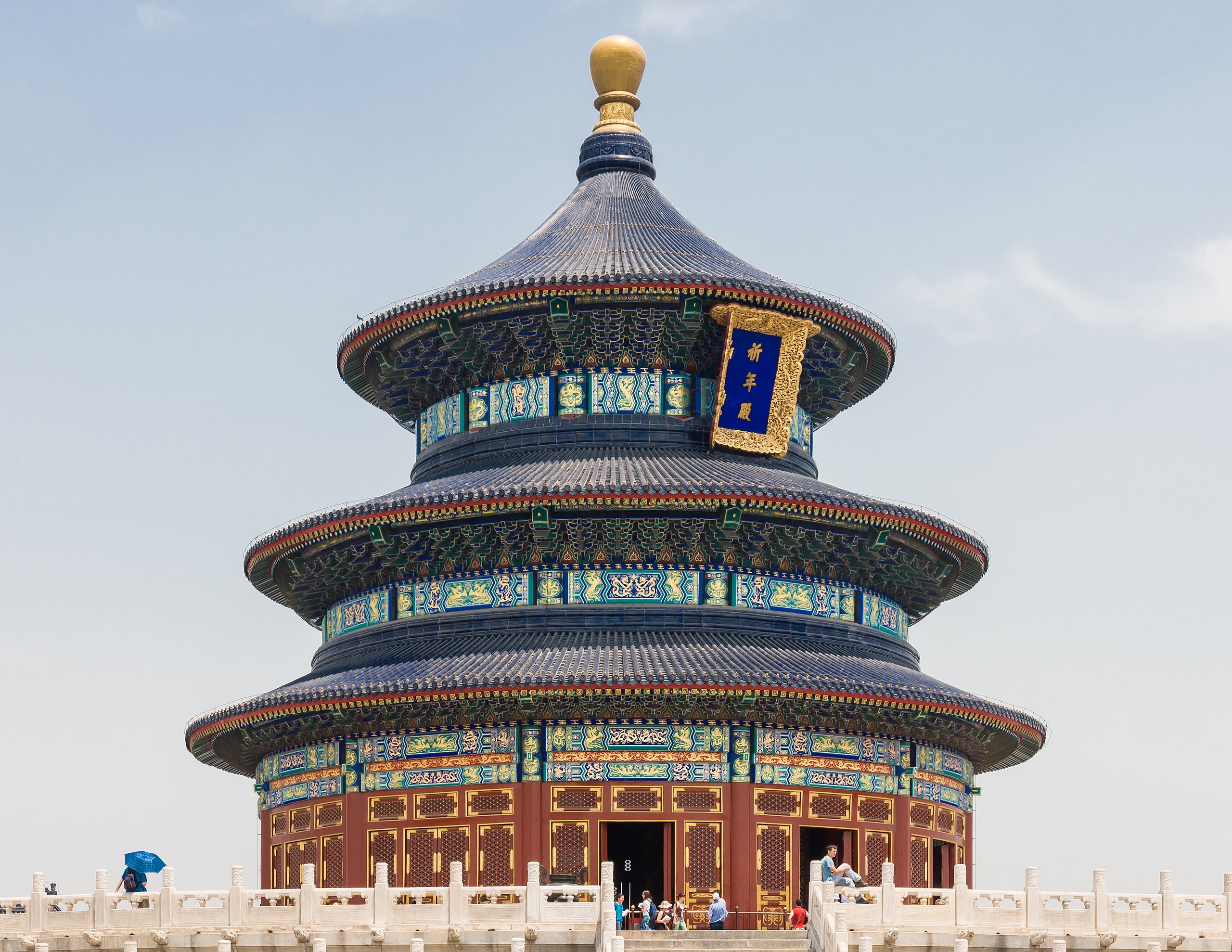 One of the best examples of religious architecture in Asia, Angkor Wat was built between 1115 and 1145 near Siem Reap in northern Cambodia. Constructed as a mausoleum for King Suryavarman II, it was first a Hindu shrine and later a Buddhist temple.

Built from 10 million blocks of sandstone, it reflects the religious and political ideas of its time and place.

Angkor Wat sits on a rise surrounded by a moat and is laid out symmetrically with tiered platforms rising to a central tower. Concentric rings with rectangular galleries connect the towers at each level.

The walls of the galleries are lined with sculptures and relief carvings. The towers themselves represent the homes of the gods with detailed carvings cut into the sandstone and volcanic rock. Miles of relief carvings depict Hindu gods, griffins, unicorns, lions, snakes, warriors, and abstract motifs carved by the greatest sculptors in Southeast Asia. Begun in 771, the Jameh Mosque amalgamates architectural styles from the 8th to the 20th century. The first structure, mud brick decorated with stucco, was replaced in 840 by a larger structure with a courtyard and hall of baked bricks and pillars that houses 10 bays including the main prayer hall.

Tenth century architects added minarets on either side of the entrance and an arcade with geometric block designs.

In the 11th century, architects added 2 domes. The first was the largest dome in the Islamic world, and the 2nd is a masterpiece with interlacing ribs forming pentagons and stars. Before 1230, builders added 4 iwans, vaulted walls, one leading to the domed vault and others surrounding the courtyard.

In the 14th century, builders divided the arcade into 2 levels and added a prayer hall covered by a series of transverse vaults. Today the mosque fluidly combines styles from throughout its 1251-year history. 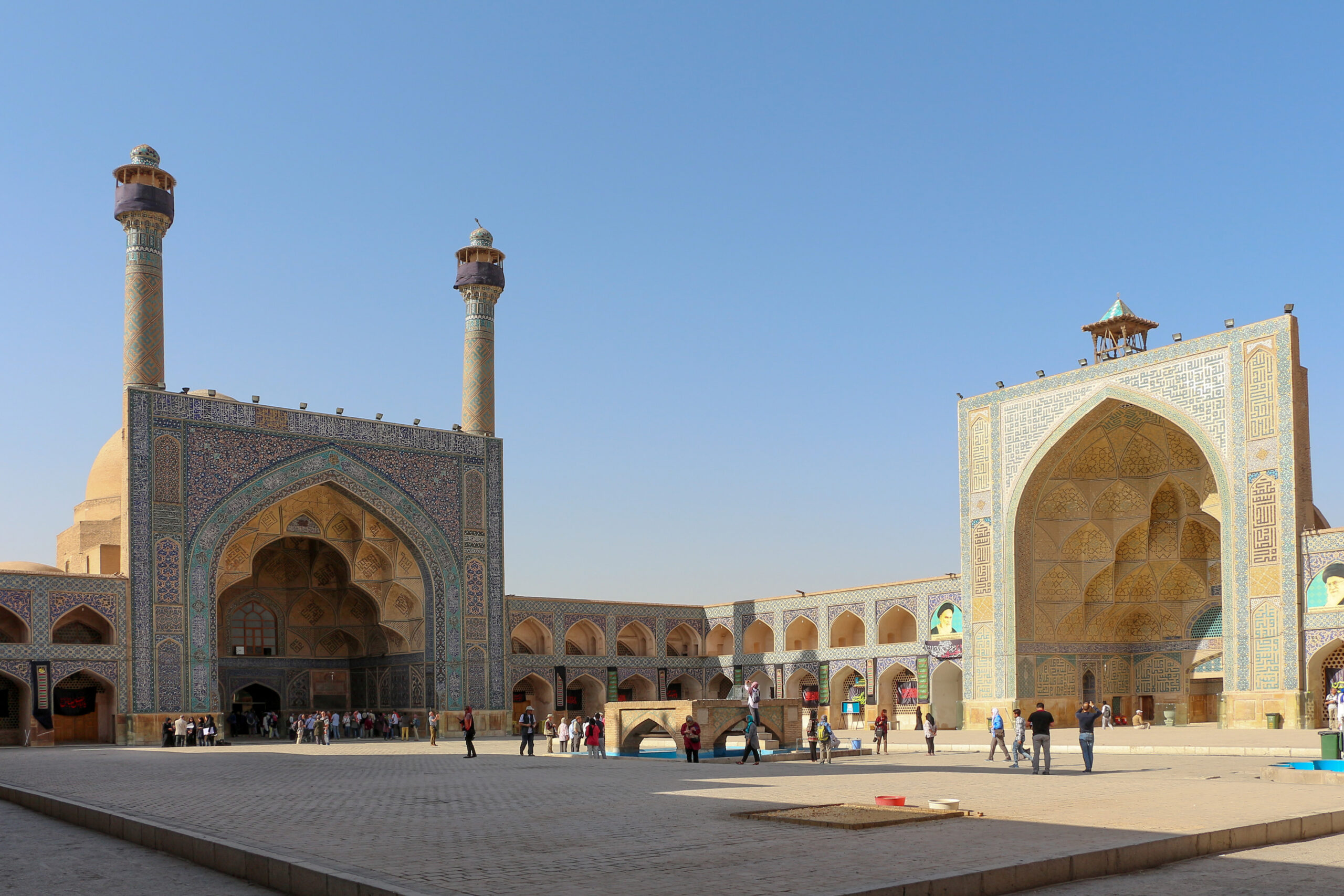