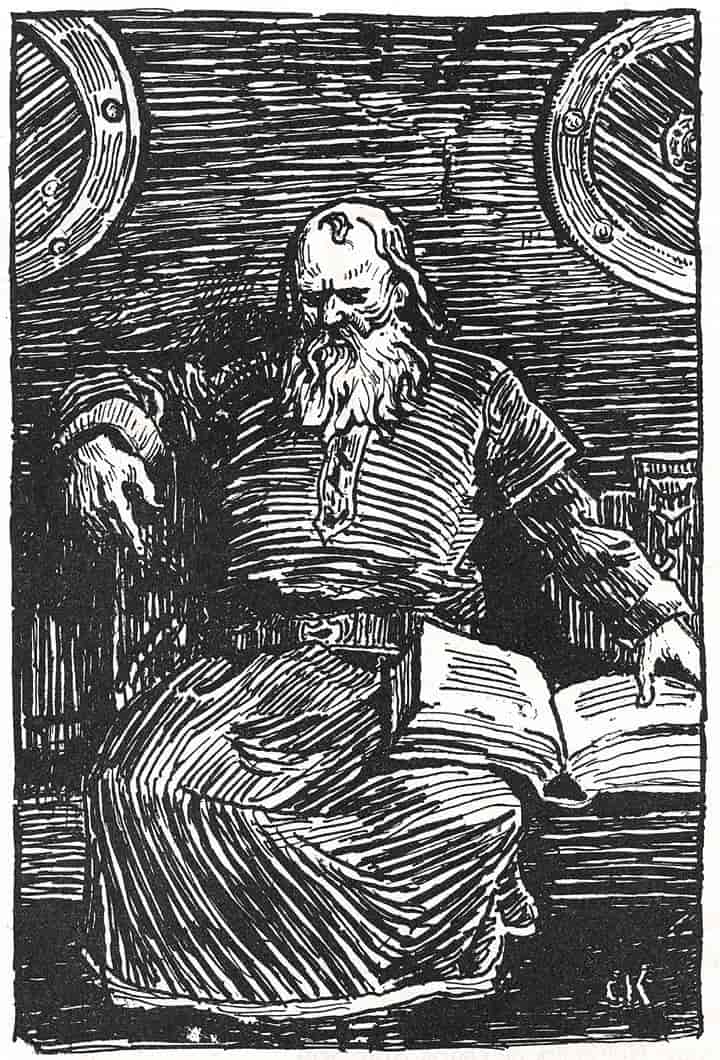 The Norse had a written alphabet called Younger Futhark, but this was mainly used to record historical events. When it came to religion, beliefs were communicated orally, with myths and legends often spoken around fireplaces or over hearty feasts.

This convention poses a problem for modern historians, who have no way to access a story told orally almost a 1000 years in the past. It is fortunate, therefore, that there are a handful of exceptions to the rule. Two important collections of Norse mythology were written in the 10th century and 13th century respectively: the Poetic Edda and the Prose Edda.

These sources are invaluable, but they only tell a small part of the story. The Norse belief system was rich and diverse, varying significantly from place to place, and many of these differences have been lost to the passing of time. Unless another written source emerges in the future, there will forever be gaps in our modern understanding of Norse mythology as a whole.

The Norse people shared their myths and legends in the form of Eddaic poetry. This style of poetry was characterized by simple, straightforward language, which made it easy to pass orally from person to person, like sharing a catchy song.

Many of these poems were never written down, and, centuries later, they have been forgotten. But not all of them suffered such a fate. At some point in the 10th century, a collection of 31 poems, known as the Poetic Edda, was compiled by an unknown author. For hundreds of years, this collection was lost, until it came into the possession of an Icelandic bishop, Brynjólfur Sveinsson, in 1643. This marked an important turning point in the study of Norse mythology, as the Poetic Edda provides more insight than any other source.

The best known poem in the Poetic Edda is Völuspá, which describes the creation of the cosmos. One verse of the poem reads as follows: “I remember the jötnar / born so long ago; / in those ancient days / they raised me. / I remember nine worlds, / nine giantesses, / and the seed / from which Yggdrasil sprang.”

Skaldic poetry was used by the Norse to describe real, historical events, such as victories in battle or the achievements of a king. This style of poetry was characterized by fancy language, complex rhyme schemes, and clever allusions to myths and gods. These poems were composed by official Skalds: poets who worked in service of a royal court.

In the 13th century, Skaldic poetry was showing signs of decline, with simpler, more accessible styles of poetry becoming more and more popular. In an effort to reverse this process, an Icelandic scholar, Snorri Sturluson, wrote the Prose Edda, which was essentially a handbook to teach prospective poets how to write Skaldic poetry of their own.

This handbook has proven invaluable to modern historians. Mythological allusions are an essential feature of Skaldic poetry, and Sturluson included a number of legends to make sure that the reader could make well-informed references. Some historians have questioned the reliability of Sturluson’s myths, as there are no other sources to corroborate against, but the Prose Edda is still widely regarded as an important historical source.

Alongside poetry, the Norse also composed sagas, which were exciting stories about famous heroes, some of them real and some of them imagined. Families used to gather in the longhouse for sagnaskemmtun, or ‘saga entertainment,’ where a saga was read aloud for the enjoyment of the entire household.

Many of these sagas were written down by Snorri Sturluson, the Icelandic scholar who also wrote the Prose Edda, a handbook to Skaldic poetry. The majority of these sagas only contain fleeting references to myths and gods, usually appearing at the edges of the central story, but there is one notable exception: the Ynglinga saga.

The Ynglinga saga is the history of a line of kings, and it starts off with several chapters about the gods of Asgard and Vanaheim, from whom these kings were supposedly descended. Sturluson based this saga on an earlier version by a 9th century Skald, Thjódólf of Hvinir, and it is another valuable source for historians of Norse mythology.

Writings from Other Cultures

Old Norse writings are not the only texts which a historian can use to study Norse mythology. There are also a number of accounts written by other cultures which came into contact with the Norse.

For example, Ibn Fadlan, a Muslim traveler in the 10th century, described a Norse funeral which included the sacrifice of a human slave, while Adam of Bremen, a German chronicler, wrote a similar account in the 11th century. After spending time in a Norse court, he said: “There is also a spring there where the pagans are accustomed to perform sacrifices and to immerse a human being alive. As long as his body is not found, the request of the people will be fulfilled.”

Of course, outsider accounts must always be handled carefully. Sacrifice, or blót, is mentioned in Old Norse sources, but worshipers usually sacrificed animals rather than humans. Muslims and Christians were both natural opponents to Norse religion, and their descriptions of human sacrifice may have been manufactured in an effort to paint the Norse in a negative light.

For a historian of Norse mythology, written sources are invaluable, but archaeological evidence can also be used to penetrate belief systems of the past.

An important example of this is human burial. Religious tokens have been discovered in Old Norse graves, such as pieces of jewelry depicting a particular god, and finding depictions of different gods in different regions of Scandinavia helps to establish geographical differences in belief. The grave itself can also be enlightening. Some graves, for example, were shaped like boats, because the Norse believed that a boat would carry their souls into the afterlife.

Historians can also study the ruins of religious buildings. Temples to the Norse gods were never common, but a number of examples have been discovered, including a large religious site at Uppsala, Sweden. Discoveries like this one suggest a ceremonial side to Norse mythology which is not depicted in written sources.

The Question of Reliability

When historians only have access to a small number of sources, it can be difficult to decide which pieces of information to trust. Even a comprehensive source, like Snorri Sturluson’s Prose Edda, could be riddled with inaccuracies, and with no other texts to cross-reference it against, those inaccuracies might never be identified.

Occasionally, patterns can be spotted between sources. A good example of this is the religious site at Uppsala. In his Ynglinga saga, Sturluson described how the Æsir built a temple at Lake Mälaren, and, hundreds of years later, archaeologists found the temple of Uppsala on the exact same spot. This temple was not really built by gods, but the discovery was still an important validation of Sturluson’s work.

In instances when validation is harder to come by, historians must rely on intuition, making their own decisions about which sources to trust. We might never achieve a perfect understanding of Norse mythology, but, with the sources available, plus some well-informed guesses, historians have painted as extensive a picture as they could manage.