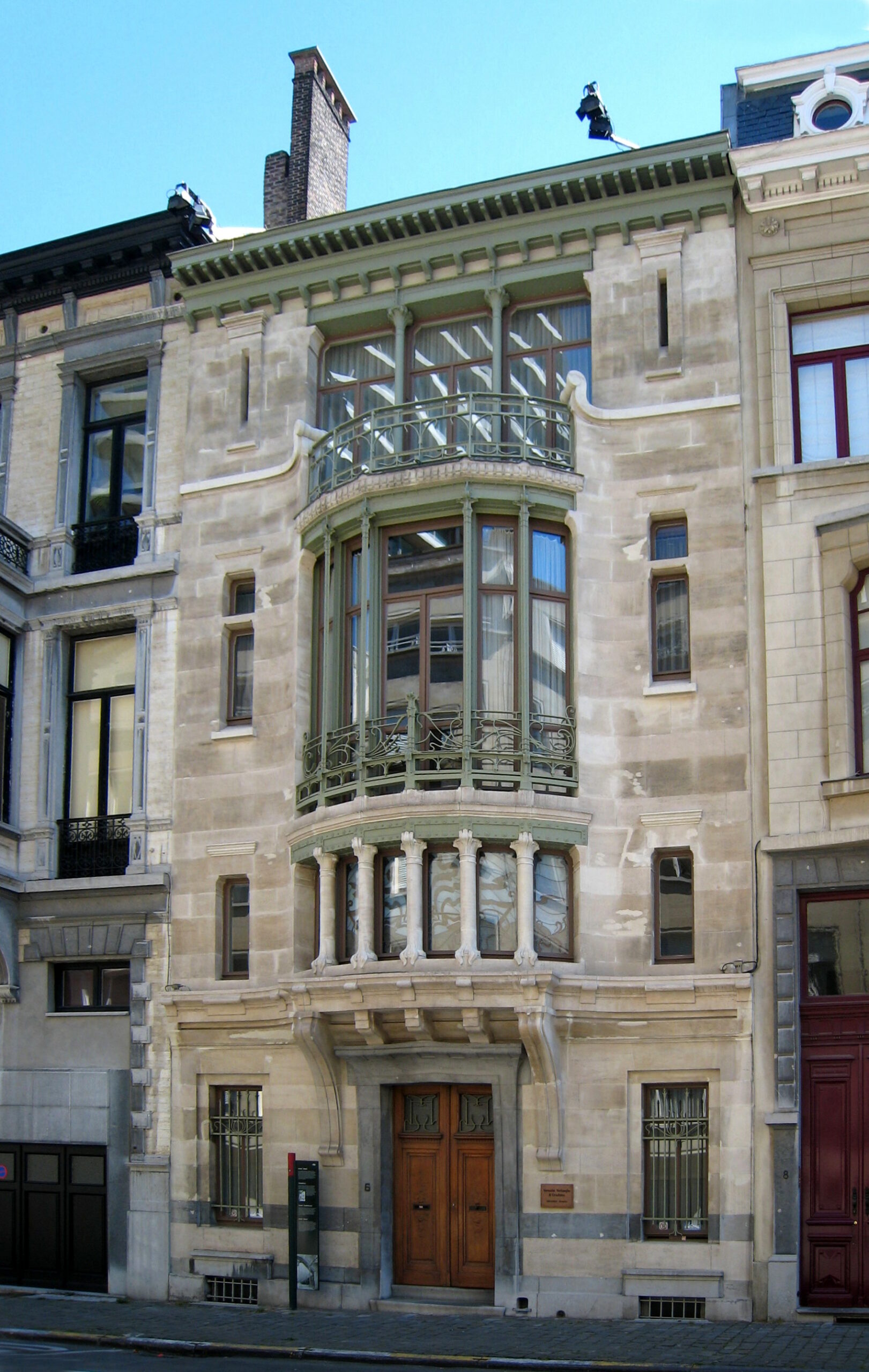 Near the end of the 19th century, artists turned to nature for inspiration, creating an aesthetic movement that influenced art, architecture, and interior design. Art Nouveau incorporates organic shapes and imitates the flow of nature. Because the style influenced multiple genres, Art Nouveau structures are often completely harmonious, from windows to door handles to interior décor.

The style began in Belgium and France and spread throughout the world at the Paris Exposition Universelle in 1900. Known by different names in different countries, it was mainly practiced in Western Europe and the United States.

Influenced by the Arts and Crafts Movement, artists focused on quality workmanship, but they also used current technology to create stylized designs with artistic qualities. Art Nouveau reacted against the rapid spread of industrialization by highlighting the gracious curves of nature and eschewing the right angles and the heavy symmetry of much of the architecture of the time.

An Introduction to Art Nouveau

Art Nouveau emerged in 1890 as part of the Belle Epoque that ended in 1914 with the start of World War I. The first Art Nouveau structures appeared in Brussels, but the style spread quickly to France where entrances to the new metro system were the earliest examples. Artists attempted to break down the traditional distinction between the fine arts and the applied arts, so Art Nouveau design principles were applied to graphic arts, furniture, glass art, textiles, ceramics, jewelry and metalwork.

Tiffany lamps, created by American Louis Tiffany, are iconic examples of Art Nouveau craftsmanship. Art Nouveau was a reaction against academic art, which is a forced synthesis of Neoclassicism and Romanticism taught in European art academies.

Art Nouveau also invoked a sense of dynamism and movement through ‘whiplash lines,’ which are asymmetrical, sweeping curves that imitate nature.

Art Nouveau architecture embraces plants and wildlife as inspiration and creates flowing lines in contrast to straight edges and right angles. Flowers, buds, stalks, vines, animals, and female forms provide the natural forms in Art Nouveau buildings. This embrace of nature is largely a reaction to 19th century architecture and academic art and seeks to break down the distinction between fine arts and applied arts.

A home in Munich, designed by German architect Johann Zitter, exemplifies this style. Near the curved roof, a kidney-shaped window is incorporated into a flowering tree with a lion’s face near the bottom. Birds with long, graceful tails flank the tree.  Two arched windows create symmetry with flowing flowers and stems above.  Four more flowers on each side complete the façade.  One of the first Art Nouveau buildings in Prague, the Hotel Central designed by Friedrich Ohmann, offers a less elaborate example. A curving bay window is flanked by the undulant curves of a tree; a woman’s face peers out among the swirling branches, and the balcony railing is adorned with flowers. 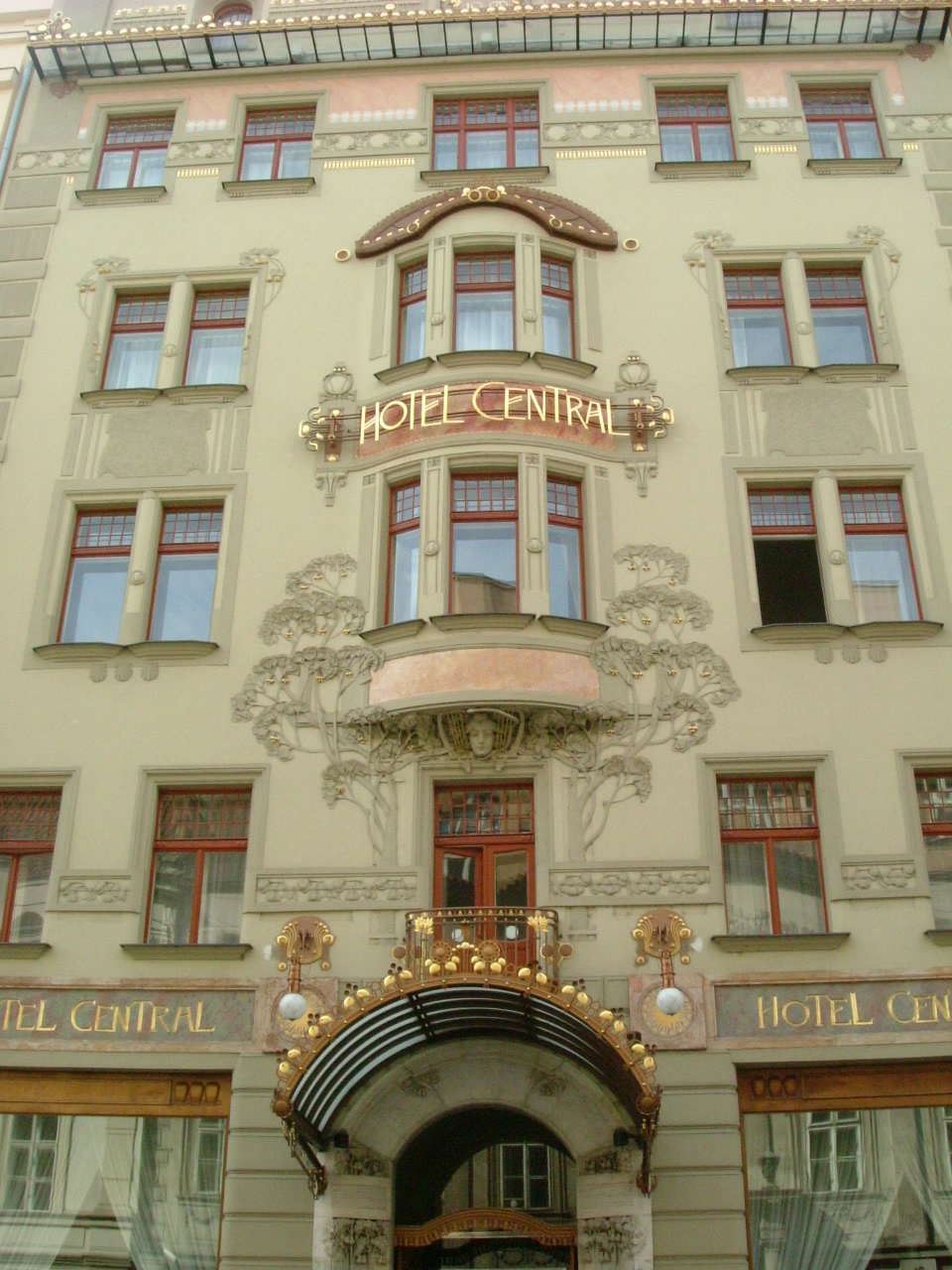 A primary feature of Art Nouveau is an asymmetrical, curved line that imitates the form of delicate natural objects such as the stems of flowers, vine tendrils, and insect wings. Although the line can be graceful and elegant, it may also imply the force and rhythm of a whip, the characteristic that gives it its name.

In architecture, the whiplash line fuses structure with ornamentation to create the unified interiors that are the hallmark of this style. Columns and beams may become vines with tendrils, in direct opposition to the traditional architectural values of structural logic and clarity.

Long before Art Nouveau, whiplash lines appeared in the arabesque designs from Islamic art, in the Rococo style from the 18th century, and in Japanese prints.

Rather than being a single style, Art Deco was a collection of styles that were sometimes contradictory. In architecture, it was a reaction against Art Nouveau, and incorporated geometric figures rather than the undulating lines of nature.

Art Deco was strongly influenced by Cubism, which sought to reduce forms to their geometric essentials: the cylinder, the sphere, and the cone. However, Art Deco elaborated the selective geometry and carried Cubism to a wider audience. Art Deco also incorporated motifs from archaeological discoveries in Egypt, Mesopotamia, Mesoamerica and Oceania.

Both Art Nouveau and Art Deco are considered ‘arts and crafts’ movements, meaning that the style extended from fine art to architecture and even interior decorations,  furniture, fixtures, decorative objects and hardware to create a seamless aesthetic with architects and interior designers working as teams. Typical building materials included reinforced concrete and mass-produced plate glass and aluminum. Art Deco designers also often worked in many fields and, in addition to buildings, created designs for planes, cars and even ocean liners. Across genres, it combined luxurious materials and expert craftsmanship.

An Introduction to Art Deco

Emerging in the early 20th century, Art Deco overlapped Art Nouveau, and developed as a protest against it. Strongly aligned with the movement to bring decorative arts to the level of fine arts, Art Deco takes its name from arts decoratifs, a term first used in 1875 to designate the designers of furniture, textiles, and glassware.

The first fully Art Deco building, the Stoclet Palace, was completed in Brussels in 1911. A stylistic prototype, it featured geometric shapes, symmetry, and straight lines with a luxurious interior including Klimt friezes.

The style was strongly influenced by Cubism, an artistic movement that appeared between 1907 and 1912, reducing forms to basic geometric essentials, the cylinder, sphere and cone. In the 1930s, a less luxuriant version of Art Deco, called Streamline, appeared in response to the Great Depression. It utilized many of the same aesthetic sensibilities but with cheaper materials. After WWII, the International Style architectural movement emerged and Art Deco was relegated to automobiles and jukeboxes. 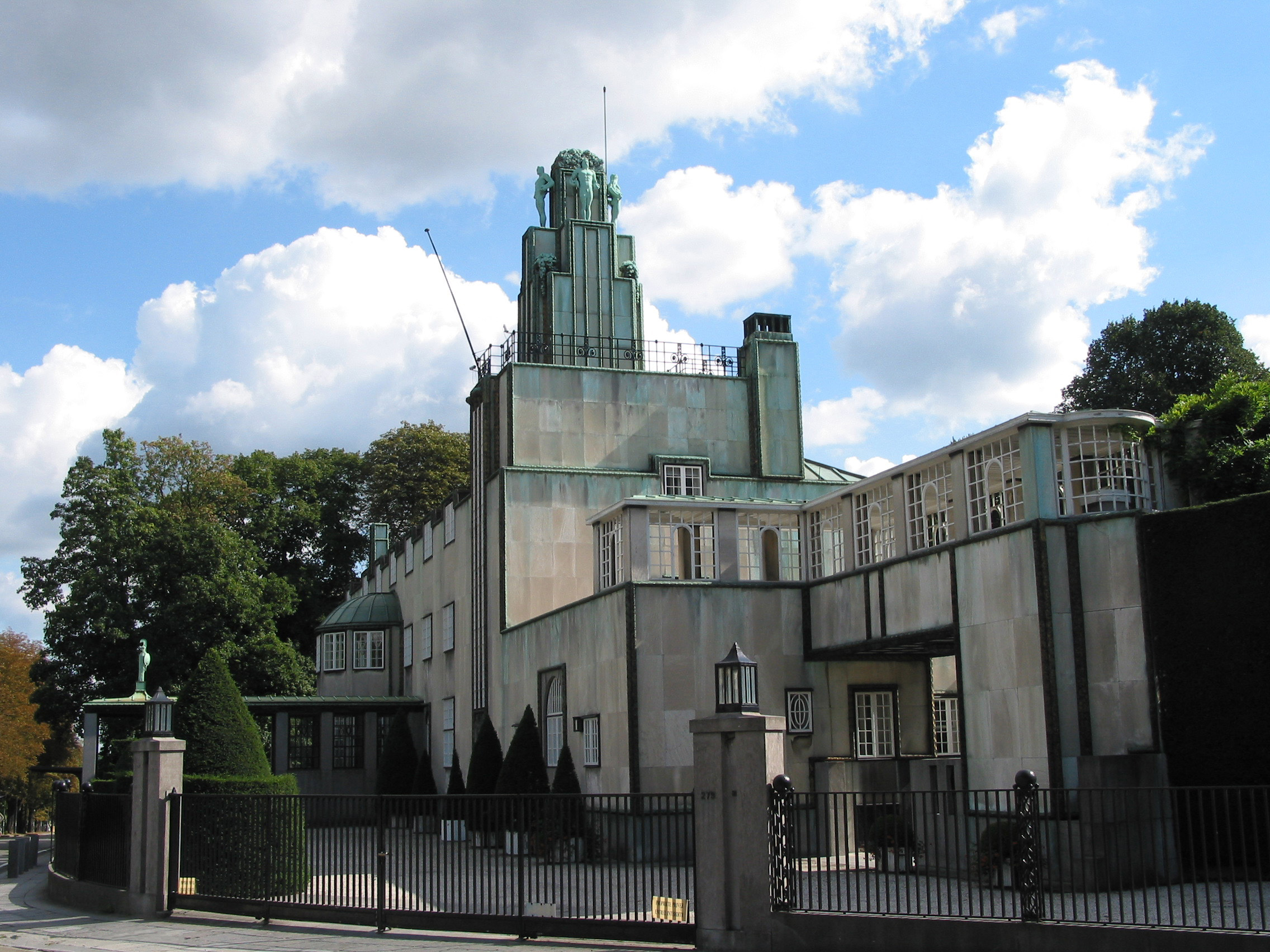 A pared down version of Art Deco called ‘Streamline,’ emerged in the 1930s, removing ornamentation and reflecting the clean lines of machine-age engineering. During the Great Depression, the opulence of Art Deco was both unseemly and unattainable because it was typically associated with high costs. Strongly influenced by studies in aerodynamics and ballistics, Streamline buildings were asymmetrical with rounded corners, straight lines and flat roofs. They were made of concrete and were typically white or pastel and sometimes had nautical flourishes such as port holes. Modern metals such as aluminum, stainless steel, and chrome were used around the doors and windows.

The Streamline style began in the United States and spread around the world. In the U.S., its affordability and visual appeal made it popular to be used commercially for locations such as stores, gas stations, movie theaters, and motels. Consumer goods such as refrigerators, radios and toasters also often incorporated these designs with polished surfaces, curved edges and strong horizontal lines. The popular and colorful dinnerware called Fiestaware, introduced in the 1930s, exemplifies the style.

Why Art Nouveau and Art Deco are often confused

Art Nouveau and Art Deco overlapped at the beginning of the 20th century, and both extend from the fine arts to the decorative arts and architecture. Both design philosophies attempted to create a whole experience by including specific design elements for furnishings including carpets, draperies, and fixtures. Perhaps for this reason, they are frequently confused, even though Art Deco arose in opposition to Art Nouveau.

Likewise, both were responses to world events: Art Nouveau to the Industrial Revolution and Art Deco to World War I. They both developed using emerging technology to create new artistic and architectural possibilities. Flowers are a typical subject for both, and both use stained glass and bas relief structures extensively. Their design elements differ starkly, however,  in that Art Nouveau uses organic, curved lines, and Art Deco uses cubist geometric shapes. Art Deco flourished during the Great Depression, so its luxury was scaled back and its shapes were streamlined.

Because of the extensive work he completed, Antoni Gaudi is the best-known Art Nouveau architect.  His great masterpiece is the Sagrada Familia Cathedral, but UNESCO has also named 6 of his other buildings as World Heritage Sites: Park Guell, Casa Batlo, Casa Mila, Cassa Vicens Gaudi, Guell Palace and El Calvet.

Although the Sagrada Familia was begun in 1866 by another architect as a Gothic cathedral, Gaudi altered the cathedral in almost unimaginable ways, earning him the title ‘The Priest of Beauty.’ The internal structure is a series of trees with multiple branches that support the stone roof. Meant to resemble a forest canopy, the ceiling is filled with ceramic flowers covered with green and gold mosaics. Colored glass allows natural light to illuminate the canopy, creating a dazzling and colorful effect on the interior of the building. The doorways are hyperbolic arches which Gaudi believed were more natural structures than the Romanesque or Gothic arches, and the towers are topped with sculpted vegetation found in Barcelona.

The Chrysler Building in New York City is one of the finest examples of Art Deco architecture. Completed in 1930, it was the tallest building in the world until the Empire State Building was finished 11 months later. In line with Art Deco’s use of costly materials, the ground floor is covered with polished black marble, and the next 3 floors are covered in white marble. Between the 4th and 16th floors, the façade is white brick, intersected with white marble bands. Other floors have stainless steel decorations, horizontal bands, abstract reliefs and giant pineapples.

Originally designed to be the headquarters of the Chrysler automotive company, the 31st floor boasts a gray and white frieze of hubcaps and fenders, and car-hood style ornaments at each corner. Stainless steel eagles serve as gargoyles on the 61st floor.

The most recognizable aspect of the building is the terraced ,  a cruciform groin vault with 7 concentric members. Clad in stainless steel and riveted in a radiating sunburst, it has triangular, vaulted windows. Both the interior and exterior of the building reflect Art Deco style with an emphasis on valuable materials and simple, geometric shapes; this look was an apt choice for a company seeking to communicate simple elegance, strength, and success.