The Decline of Norse Mythology The Arrival of Christianity

The first Christian missionaries arrived in Scandinavia towards the beginning of the 8th century, at a time when Christianity had already become a dominant force in the rest of Europe. They began to preach to the Norse, asking them to embrace Jesus Christ and the cross.

Initially, the Norse regarded Jesus just like any other god. His existence did not disprove any of their other beliefs, no more than the existence of Odin disproved the existence of Thor. When the first churches were built in Scandinavia, there were often Norse gods and creatures carved into the wood alongside pictures of Jesus, while gravestones have been discovered with the cross of Jesus and the hammer of Thor depicted side by side.

Over time, though, the idea of Jesus began to erode away at the other gods. He promised something that the others did not: divine salvation, and an eternal home in the paradise of Heaven. On top of this, there was a political benefit to conversion, with Scandinavian rulers embracing Christianity in return for deals and alliances with the Christian kingdoms of Europe.

The Conversion of Denmark

The Christianization of Denmark began in the 8th century, but without much success. The king at that time was Ongendus, who one missionary described as “more savage than any beast and harder than stone.” Ongendus was loyal to the old gods, and most of his subjects took a similar stance.

This changed in 960 CE, when a new king, Harald Bluetooth, converted to Christianity. He supposedly made this decision after watching a Christian monk hold a piece of hot iron in the palm of his hand without receiving any burns, but there were political reasons too. Otto the Great, the Holy Roman Emperor, was present at Harald’s conversion, and subsequently became a powerful friend to the Danes.

Harald proceeded to ban his subjects from worshiping the old gods. In private, some families may have stuck to their beliefs, but this resistance did not last for long. Without public expression and communal storytelling, the old way of thinking was lost.

The Conversion of Norway

Snorri Sturluson’s Heimskringla saga tells the story of Christianity in Norway, beginning with the conversion of Haakon the Good at some stage in the 10th century. He began to set up churches and to welcome missionaries into the kingdom, but these developments were not always popular. Near Trondheim, for example, 3 churches were burned to the ground by angry Norsemen.

Two generations later, Haakon Sigurdsson Jarl, a staunch believer in the old gods, ascended to the Norwegian throne. He tried to save the Norse belief system by introducing ‘state paganism,’ an official version of Norse mythology with the backing of the state behind it.

But state paganism did not last. Haakon Sigurdsson was followed by Olaf Tryggvason, who was so aggressively Christian that he ordered the destruction of Norse holy sites, as well as the conversion of subjects by pressing a knife to their throats. While Olaf’s zealousness may have been overstated by Christian writers, there is little doubt that, from the 11th century onwards, Norse mythology was no longer welcome in Norway. 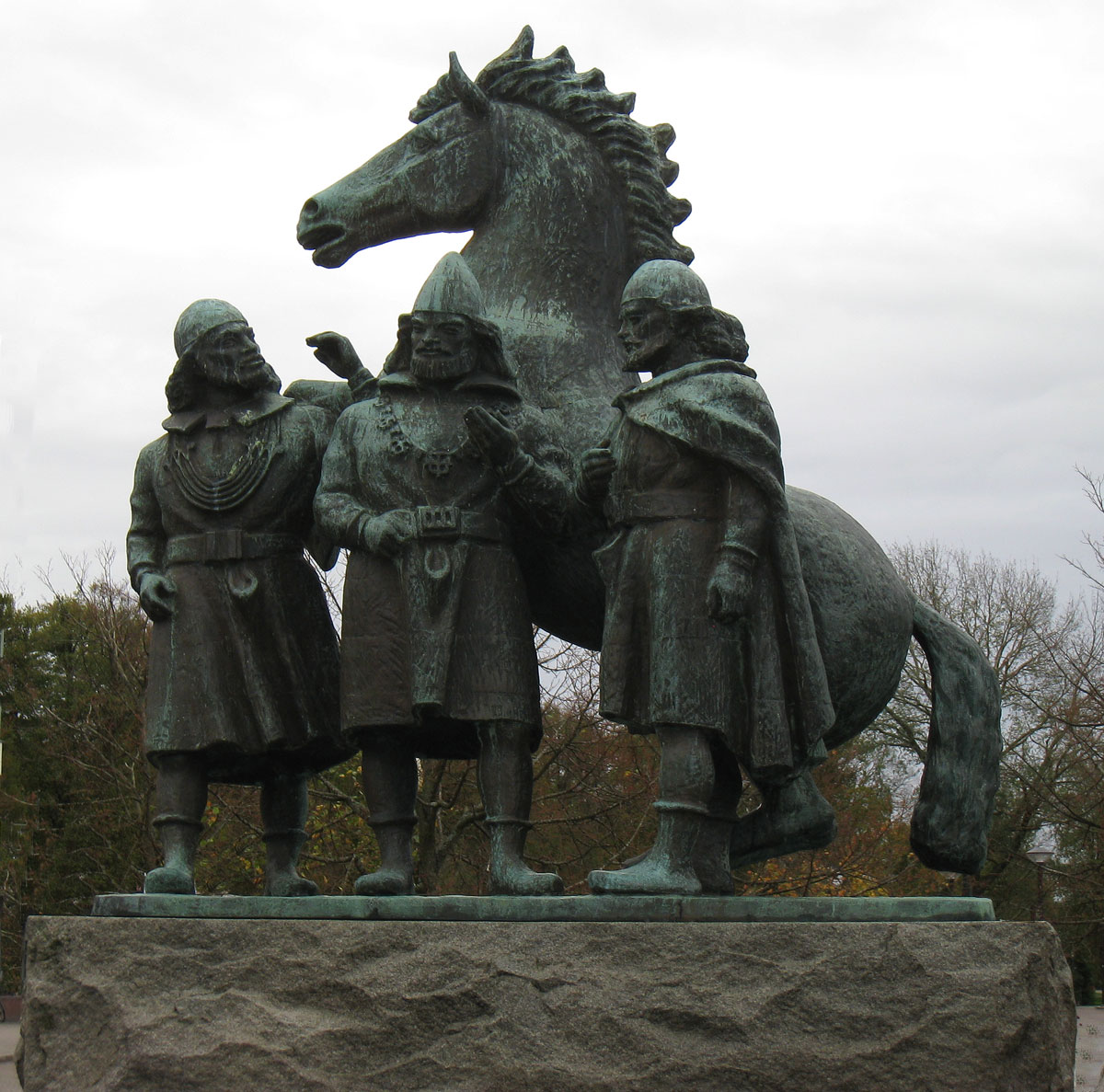 The Conversion of Sweden

Sweden enjoyed a period of mutual toleration between Christianity and the old belief system. The first Christian king, Olof Skötkonung, took the throne toward the end of the 10th century, and made an agreement with worshipers at the temple of Uppsala that neither religion would try to infringe upon the other.

This tentative coexistence came to an end in the 11th century. At that time, 2  brother-in-laws were competing to become king of Sweden. Inge the Elder was a devoted Christian, while Blot-Sweyn believed in the old gods.

According to the Orkneyinga saga, written by an unknown author, Inge burned down Blot-Sweyn’s house while Blot-Sweyn was still inside it. He then proceeded to purge the old belief system from the kingdom: “He took great pains to root out those evil ways.”

The Conversion of Iceland

Olaf Tryggvason was an aggressively Christian king of Norway. In the 11th century, he sent a Christian missionary to Iceland, who managed to convert some influential Icelanders, but also murdered several poets after they insulted his beliefs. He was outlawed for these crimes, and forced to flee back to Norway.

These events created a tense environment in Iceland. The government held a meeting in 998 CE, and the Christians and the Norse who gathered in attendance both insulted one another’s gods. A year later, they met again, and this time it was decided that a solution needed to be found.

The leader of the assembly, Thorgeirr Thorkelsson, believed in the old gods. However, he also recognized the need for national stability. After a day and a night of meditation on the issue, he suggested that Christianity should become the official, national religion of Iceland, but that the old belief system would still be legal if people wished to practice it in the privacy of their homes. Both the Christians and the pagans agreed to this plan, in an event known as the kristnitaka.

The 2 main sources for Norse mythology, the Poetic Edda and the Prose Edda, were written in the 10th century and 13th century. In other words, the Poetic Edda was written while Christianity was spreading through Scandinavia, while the Prose Edda was written after Christianity had firmly taken root. Sturluson, himself, was a devoted Christian, who did not believe in the gods and legends he was writing about.

Because of this, there is every chance that the 2 sources, in particular the Prose Edda, give a corrupted account of Norse mythology. For example, some historians believe that the figure of Baldur was inspired by Jesus, and that, in older versions, he would have been depicted very differently. Another example is Náströnd, a place of eternal suffering which was probably inspired by the Christian idea of Hell. Meanwhile, Sturluson’s division of light elves and dark elves feels like an allegory for angels and demons.

These corruptions mean that our modern understanding of Norse mythology will always be flawed. The rise of Christianity did not simply destroy the old belief system; it also made sure that the finer details of that belief system would fail to survive the passing of time.

The Sámi people are a remote community who inhabit northern Scandinavia. Their isolation was like a shield against the influence of Christianization, and subtle aspects of Norse mythology managed to survive in this region as late as the 18th century.

For example, the Sámi worshiped a deity called Thora Galles. This god of thunder was usually depicted with a hammer in hand, and was clearly inspired by the concept of Thor in Norse mythology. There is plenty of evidence of trade and exchange between the Sámi and the Norse, so it should come as no surprise to find a reference to Norse mythology in Sámi culture.

However, even the beliefs of the isolated Sámi could not survive forever. In the 1720s, Thomas von Westen, a Christian missionary, made a concerted effort to convert them. This process included the burning of sacred items and the destruction of sacred sites. By the time it was all over, the final bastion of Norse mythology had been lost.

It is easy to find parallels between Christianization and the Ragnarök prophecy. According to the Prose Edda, Ragnarök was a changing of the guard, when the old gods were killed and Baldur was resurrected to replace them. If Baldur is viewed as an analogy for Christ, this narrative matches Christianization perfectly: the old gods passed away, and Jesus took their place.

These parallels may not be a coincidence. In fact, some historians believe that this ending to the Ragnarök story was deliberately introduced by Christians, who wanted to justify their own position under the guise of religious narrative. Older versions of the myth may have ended very differently, with the remains of the cosmos collapsing into the sea, leaving nothing but darkness behind.

We might never know the truth about this matter, but whether or not the myth of Ragnarök was deliberately modified by Christians, one thing is certain: the prophesied death of the Old Norse gods was an event which truly came to pass.