Alarm Bells of the Economy

Why are uncontrolled inflation and unemployment such menaces? This tile provides a brief guide. 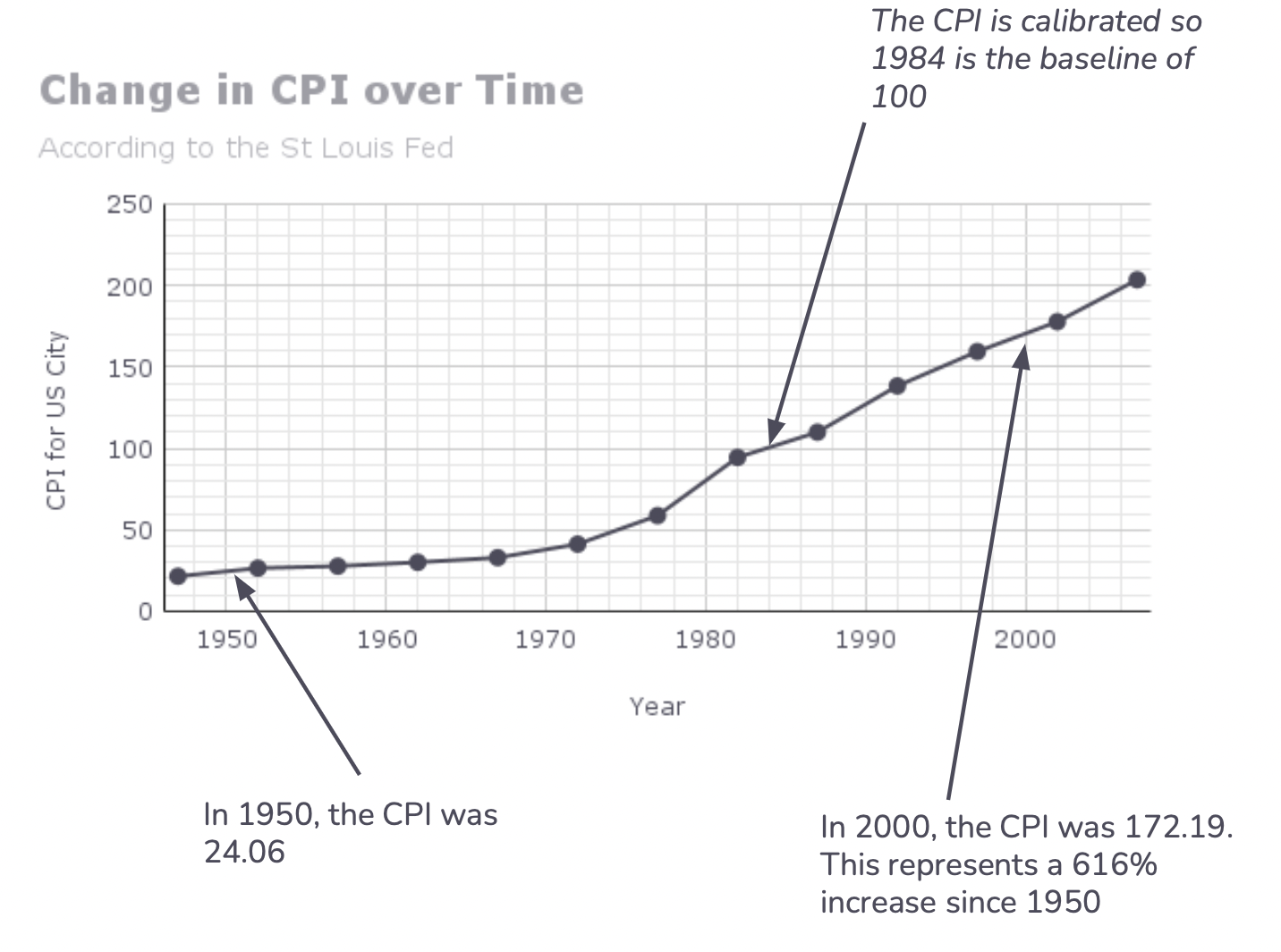 The ‘economy’ is not a single concrete thing that we can point to. It is merely a concept we use to understand the way markets work. Economics as a field of study reduces the workings of an economy into a fairly straightforward set of rules. Theories paint a picture of the economy as an obedient creature easily manipulated by its puppet master, but it is actually a complex beast that detests being told what to do.

Perhaps the economy is more comparable to a Rubik’s Cube. You fiddle with it to solve one side of the puzzle, but in doing so, you mess up the other 5 sides of the cube. However, a Rubik’s Cube is easier to master, whereas an economy is close to impossible.

So, why bother learning macroeconomics? Because we don’t live in a vacuum, and many of the indicators that economists track affect us on a personal level. Moreover, some metrics serve as early warning signs that help us prepare for future trouble, but they’re only helpful insofar as we understand and detect them.

Have you ever been told not to keep your savings tucked under your mattress? And do you understand why? Sure, house burglars are a valid reason, but it’s not just that. Even multibillionaires with state-of-the-art security are vulnerable to a proverbial thief that need not get close to their cash.

Typically, money that sits idly or unproductively is constantly shrinking. The culprit behind this phenomenon is inflation, where the general level of prices increases steadily. You’ll have noticed this happening if you’re an observant grocery shopper. The contents of your grocery cart might not change, but the amount you pay at the register might grow little by little, year after year.

So, even though the $100 bill you stashed away at a safe corner at home remains intact, that money might afford you one less tray of eggs this year compared to last. Inflation has shrunk the buying power of your money. This is why we’re taught to invest spare cash in income-generating assets, to offset the effects of inflation eating away at our hard-earned money.

Consumers find inflation bothersome. Governments fear uncontrolled inflation. Most governments, however, aim for a small, steady rate of inflation – 2% in the US – because economists generally believe it helps the economy grow. So why does inflation occur in the first place? It happens when there is too much money chasing too few goods.

The supply of money within an economy is something that government officials monitor closely. The government controls money supply, printing more cash or restricting money flow as it sees fit. Too little money, and you’ll have people tightening their belts. Fearing they’ll run out of funds, people delay spending. Without customers, firms lay off employees to cut costs and keep losses at a minimum. What’s worse, businesses may have to shut down.

Conversely, too much money circulating means that people have more cash to spend. If production doesn’t keep up, demand will outpace supply. Businesses will run out of inventory unless they can ramp up production. But, to produce beyond capacity, businesses might hire more workers or require employees to work overtime. Either entails additional costs, which firms pass on to consumers by raising prices. Thus, inflation occurs.

Unusually high inflation occurs because of shocks in the system that rapidly increase the demand for goods and services, such as a sudden increase in money supply. But shocks aren’t always the government’s fault. A pandemic, for example, can cause seismic disruptions in the system.

Recall when, not too long ago, the world went nuts for toilet paper. At the onset of COVID-19 lockdowns in 2020, uncertainty triggered irrational behavior. Some folks decided to stockpile toilet paper, causing others to panic at the thought of a shortage. Panic breeds further panic, setting off waves of fear.

Toilet paper won the popularity contest, but the public also hoarded canned goods and hand sanitizer. This led to what we saw in March 2020 – supermarkets with remarkably empty racks, grown women fighting over toilet paper[11]. If you’re wondering, the answer is yes, toilet paper prices rose, at least in 57% of the world[12]. That said, the initial shock that led to intense shopping sprees was short-lived. Layoffs and uncertainty replaced panic, simmering down the public and staving off inflation.

The supply side contributes to inflation, too

In a free market, the interplay between demand and supply drives prices. So, naturally, supply-side factors contribute to inflation too. At the height of the COVID-19 pandemic, infected workers had to stay home, leading to staff shortages. Aging workers didn’t want to risk their lives, and overworked-but-underpaid employees found themselves at their breaking point. This led to the Great Resignation, which made waves across the US, Australia, China, and Europe[13]. Businesses buckled under the weight of a leaner workforce. Global production dropped by 3.6% in 2020[14] due to a sharp decline in productivity.

Besides labor woes, COVID-19 restrictions sent the global supply chain into disarray. Quarantines and other safety precautions caused logistical nightmares. US and Chinese ports saw massive backlogs, with shipping containers stranded and unable to transport much-needed goods across the globe. Materials for production grew in cost, so businesses found themselves raising prices for finished goods too. These 2 supply-side factors – labor shortages and the global supply chain fiasco – are 2 reasons behind the rising inflation rates in 2022[15].

Tracking prices with a market basket

Who decides the rate of inflation? No one, really, because it’s driven by market forces. Instead, inflation is monitored and measured. In the United States, the Bureau of Labor Statistics (BLS) is responsible for this.

There are many ways to measure inflation, but the most popular metric is the consumer price index (CPI). The CPI is a metaphoric basket of goods and services representing an average household’s spending. It contains thousands of items, including clothing, gasoline, housing repairs, and medicine. Authorities track the movement in prices for goods and services in each basket, compute for a total, and compare this to a base year.

Assigning a number to price changes

A graph that shows inflation rates, like the one below[17], provides a more intuitive look into how prices change over time. We can see that price levels in the US have mostly seen a steady increase. Sometimes, inflation can be drastic, as in 1980, when the inflation rate was pegged at 13.50%.

But there are also rare moments when inflation is negative – deflation. We see this in 1949, 1955, and 2009. Deflation occurs when the economy slows down significantly – what we call a recession. A recession is when there are 2 consecutive periods where an economy has shrunk. In times like these, price levels drop. This might seem preferable for consumers – who doesn’t want cheaper goods? – but it is nothing to celebrate about, as it signifies a weakening economy.

[Image: Graph of % Change of CPI over Time] 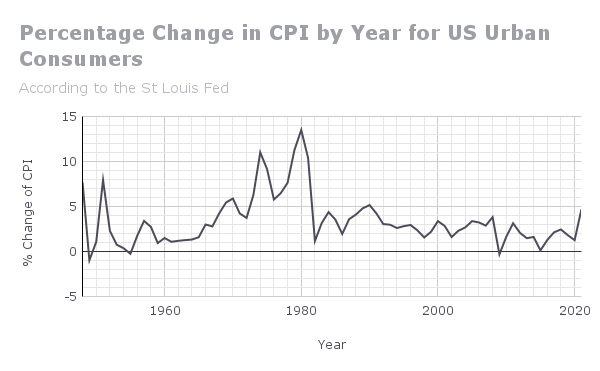 What, me, worry (about inflation)?

“Congratulations!” your boss says during your year-end performance review, “I’m awarding you a 5% raise.” Should you celebrate? Well, what’s this year’s inflation rate? If it’s exactly 5%, the increase is just enough to offset the higher cost of living. If inflation exceeds 5%, then your real wage is actually decreasing because inflation means your salary can now buy less.

An upward trend in average nominal wages doesn’t necessarily mean that workers are better off. If their real wages lag behind inflation, they’ll end up saving less than before, if at all.

Life savings also crumble under inflation. Parking your savings in a bank account providing 0.03% interest is like leaving your money to the wolves. That’s why financial advisors recommend investing in income-generating assets.

Finally, imagine a world where prices double daily – hyperinflation. Money loses value so quickly that people have no incentive to save. You’d want to spend whatever money you receive straight away, before prices increase again, weekly grocery run be damned. Under such circumstances, no investment can give large enough returns to offset hyperinflation.

A disruption to the ecosystem

Price is a signal of scarcity or value. When pork prices increase, we assume it’s because there’s less pork in the market, perhaps due to swine flu. But when market prices are volatile, price confusion follows. Should a restaurant focus on chicken, raise prices for pork dishes, or raise prices for all menu items? There’s no clear answer until the market stabilizes.

Inflation also hurts money lenders. When banks lend money, they expect a certain rate of return after considering inflation. Take a 10% interest rate on a one-year $1,000 loan. 3% might cover their expected inflation, and 7% is their real interest rate. If inflation suddenly registers at 8%, $80 of the $100 interest payment is consumed by inflation. The bank earns 2%, well below target. Inflation benefits the borrower but hurts the lender.

What if banks expect inflation to skyrocket? They’ll increase nominal interest rates accordingly. But when inflation is high and volatile, banks might just cease lending activities to minimize risk. When this happens, borrowers lose access to loans, which hampers investment and spending.

What happens when an economy is struggling? People worry about losing their jobs.      During the COVID-19 pandemic, businesses anticipated a downswing due to lockdown restrictions. With production grinding to a halt, firms had to trim excess fat by laying off employees.

The third and final indicator of a country’s economic health is its unemployment rate. The government keeps track of this statistic because able-bodied people struggling to find work signals that the economy is not being efficient – it’s producing below its potential.

What does it mean to be unemployed from an economist’s perspective? The moment you graduate from high school or university and start applying for work, you are considered unemployed. If, after some time, you still haven’t received any viable job offers and you decide to take a few months’ break from job hunting, you have become a discouraged worker. Discouraged workers are not included in the unemployment rate, and neither are parts of the population who are unable or unwilling to hold a job – underaged people, full-time students, retirees, stay-at-home moms, and institutionalized people.

Frictional unemployment happens when someone is in between jobs to seek better pay, to relocate, or for other personal reasons. It’s considered natural, as people move through different stages in life.

Finally, cyclical unemployment happens when firms have fewer jobs than there are job applicants. Economies go through boom-and-bust cycles, and, when it’s at the bottom, firms fire workers to stay afloat.