Wealth: Why and How?

How do we measure a country’s economic success? Let’s walk through a common yardstick: the gross domestic product. 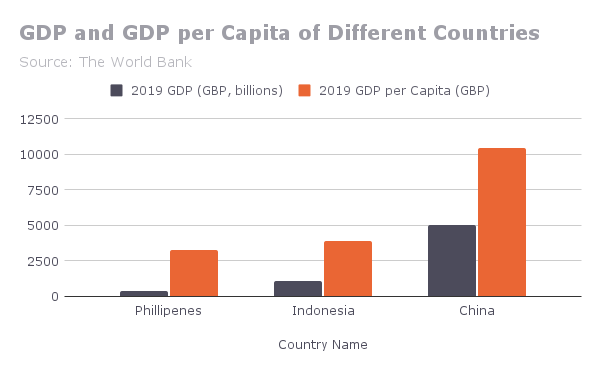 Rabbits and turtles, miracles and disasters

Across the world, some countries are thriving. Despite sensationalist news headlines, the US economy has been growing steadily. It had enjoyed the distinction of being the world’s richest nation in terms of total economic output for decades before China dethroned it in 2022. Economists consider South Korea an economic miracle. From an agriculture-based economy, in 2021, it became the world’s 10th largest economy, exporting machinery and electronics, and even cultural content.

Meanwhile, although Japan ranks as the world’s third largest economy, it has mostly stagnated since the 1990s, only seeing small spurts of growth in the 2000s. By 2019, its economy had shrunk back to its size in 2008, and the country continues to face an aging population.

But when we compare truly poor countries to larger economies, the disparity is jarring. Many African countries like Liberia, Burundi, and the Central African Republic have lagged while the rest of the world has moved on. In a time when prosperous nations have seen self-driving cars, smartphones, and universal healthcare, it’s worth pondering why some countries struggle to provide citizens with basic goods and services.

How do we know when a country’s economy is doing well? A crucial indicator economists look at is a nation’s GDP or gross domestic product. GDP refers to the total dollar value of all final goods and services produced within a country in a year.

GDP only considers final goods. If a country produces $1 million worth of eggs that were in turn used to bake $25 million worth of cake, only the latter is added to its GDP. The eggs don’t count. They were an intermediate good, a product used as an ingredient to another finished good. Other examples include nuts and bolts used in manufacturing shelving racks, or wheat used to produce bread.

Intermediate goods differ from capital goods, which also help create other finished goods and services, but are merely used to help in production rather than serving as an ingredient or material. This includes things like equipment used in a factory, or tractors used for farming.

Remember that GDP only looks at goods produced within the country. If a Japanese company has a manufacturing facility in China and that facility produces $3 billion worth of goods, that amount is added to China’s GDP, not Japan’s. Who owns the company doesn’t matter so much as where the goods are produced, at least from a GDP standpoint.

Finally, this year’s GDP only accounts for goods produced this year. If a house was constructed last year but was only sold this year, it counts in last year’s GDP, not this year’s. What about a house built 5 years ago, sold that same year, and then resold this year? The value of the house was only added to the GDP 5 years ago, when it was produced. The resale of old products doesn’t count in GDP because GDP is supposed to be a measure of output or production. Reselling used goods doesn’t involve any new output, so it is irrelevant in terms of GDP.

What does GDP not tell us?

The GDP as an economic indicator has limitations. As its creator, Simon Kuznets, once said, “The welfare of a nation can scarcely be inferred from a measure of national income.” By reducing a complex world into a single number, we leave nuance behind.

When a woman leaves the workforce to care for her newborn, the work she pours into childrearing does not figure into a nation’s GDP. Yet, it is every bit as important in building a healthy country. Or take a man who does his own carpentry instead of buying furniture from a store. GDP doesn’t care for his labor, even if he produces something of value.

Keep in mind also that GDP represents quantity but not quality. A nation whose GDP skyrockets at the expense of its rainforests and natural resources may not necessarily be better off in the long term. Or there could be a country with a growing GDP, but its poor still struggle to feed themselves while the rich get richer. We are unable to appreciate such detail by focusing on GDP alone.

But hold on. China has an extremely large population. Naturally, it must produce more goods and services to sustain its populace. While we can say that China’s economy is 40.72 times larger than the Philippines’, does it follow that an average Chinese citizen is 40.72 times richer than the average Filipino? A nuanced comparison must account for both countries’ population sizes.

By definition, GDP is tied to the market value of goods. When prices increase, GDP likewise grows. You can grow the same number of pineapples for 2 years, and GDP would grow if pineapples cost $2 more apiece the second year. On paper, you produced more, but that’s just nominal growth.

What we want to see is real growth. If we compute for GDP using the same prices as last year, we want it to still reflect a net increase. That means we grew more pineapples this year. Alternatively, we can grow the same number of pineapples but improve their quality. Sweeter, more nutrient-dense pineapples will net a higher price, which would reflect real, not nominal[9][10], growth.

Why is real GDP an important measure? The figure below shows US GDP, both real and nominal. Notice how GDP seems to have grown 69 times from 1950 to 2020. In fact, output has only really grown sevenfold. Using real GDP gives us a more accurate picture of how a country’s output levels grow over time. 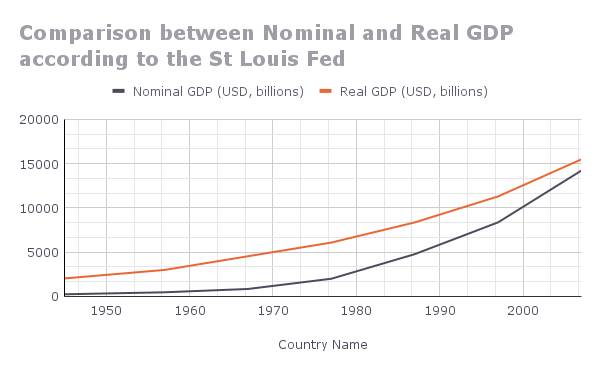 Circling back to the root of economics

Why is GDP important? Why do we care about measuring countries’ production? To answer this, we look at the Greek word oikonomia, which roughly translates to ‘household management.’ At its heart, modern economics is like a household with a dilemma – unlimited wants and needs coupled with limited resources. Which desires deserve priority? How can resources be maximized to fulfill as many wants and desires as possible?

A 2-person household has any number of desires – a dream vacation, a new car, early retirement – on top of basic needs like food, water, and shelter. It uses its resources of time, labor, and expertise by seeking employment, thus converting resources into output (income) that pays for their needs. How well their needs are met depends on how efficiently the household solves this puzzle, or how much income it produces.

Likewise, countries maximize the utility of their resources to meet the needs of their constituents. Thus, GDP is a useful metric because a country needs income in order to provide healthcare, education, and infrastructure. When national income falls short, citizens’ needs aren’t met.

Scarcity, and why you can’t have your cake and eat it too

In economics, the idea of limited resources paired with unlimited desires is summed up in the concept of scarcity. This concept is arguably the most universal and relatable of all topics in the field. A person can have all the money in the world and yet still be constrained by time. We are all affected by scarcity, be it in the form of food, money, time, or knowledge.

Hand in hand with scarcity is the idea of tradeoffs. Every decision we make robs us of the opportunity to pursue another choice. Women constantly have to choose between pursuing a career or focusing on motherhood. They can choose to pursue one before the other, or to juggle both at the same time, but, in doing so, they give up something else – time for themselves, proper rest, or health.

A household’s spending is limited by their disposable income. If they want to purchase something off-budget, they have to cut back spending elsewhere. Sure, they can pay for big purchases on credit, but that’s just delaying the tradeoff. They’ll still have to find the funds elsewhere at some point.