The Ebbs and Flows of a Business Cycle 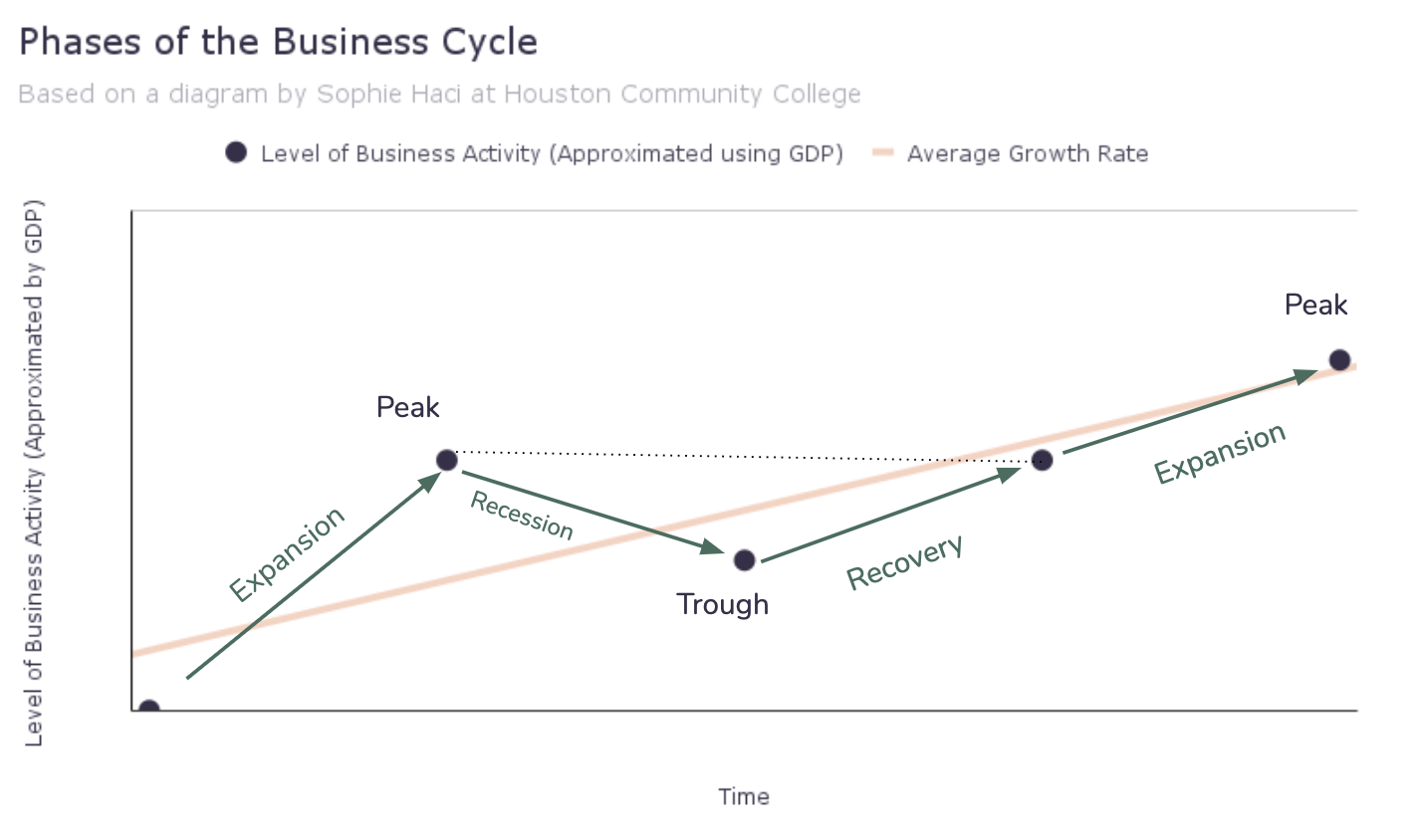 Growth is not linear

The wheels of life keep turning, and so it goes with the economy. It flourishes and expands, it peaks then contracts, and recovers once again after hitting a trough, and the cycle begins again. These fluctuations are a normal part of a nation’s journey toward long-term growth. A nation’s production does not remain constant, nor does it grow at a fixed pace. Economies will encounter roadblocks, where output slows and growth reverses.

What economists and governments try to control is the duration and amplitude of each phase in the cycle. We want to prolong periods of recovery so that, in the long run, the nation still ends up in a better place than it was before.

Meanwhile, recessions refer to a significant decline in the economy and are usually declared when GDP experiences a decline for six straight months. We try to keep recessionary periods short so as to minimize people’s hardships since unemployment rises during these times.

Recessions affect not just the labor market. When businesses slow down production, land and other capital also go unused. This suggests that an economy’s resources are being wasted, as it is not producing at full potential.

Most recessions have a specific cause, though they usually arise from a combination of factors. The 2008 recession was triggered by the bursting of the US housing bubble. Specifically, it arose from excessive risk taking by financial institutions and overborrowing from consumers. With the Asian Financial Crisis, the loss of confidence from foreign investors created a downward spiral for East and Southeast Asia.

Recessions happen for many reasons – a shrinking money supply, poor business decisions, bad government policies, or a loss of confidence. Regardless of the cause, how bad a recession gets and how soon it ends largely depends on government response. But oftentimes, we only realize we’re in a recession when we’re already deep into one, simply because of the way it is defined – six straight months of GDP decline. Economist Claudia Sahm offers an early warning sign. When unemployment rises 0.5% relative to its lowest point from the past 12 months, the Sahm indicator suggests that governments should act quickly. Otherwise, the economy will enter a recession if the current momentum continues.

When the price is not right

Consumption drives economies. When spending decelerates, the economy follows. But, in macroeconomics, how much one person wants to spend – demand – is inconsequential. Instead, we look at aggregate demand, the total demand for goods and services across the market. Aggregate demand is important because it affects whether businesses produce more, which ultimately impacts GDP.

Finally, demand from other countries drops when prices rise. Why pay more when they can buy the same goods cheaper elsewhere?

Supply, the long and short of it

To fulfill demand, there must be a sufficient supply of goods. Since we’re looking at how the economy moves as a whole, we pay attention to aggregate supply: the total quantity of goods and services produced within the economy.

In the long run, aggregate supply has no relationship to price level. How much an economy can sustainably produce is limited by its resources – its infrastructure, its workforce, its labor productivity, as well as the amount of capital businesses have invested in the economy. Even if prices tripled or increased tenfold, aggregate supply may increase in the short run, but it will always gravitate back to the maximum production level based on its real capacity.

Price changes can be tricky

Let’s put together what we know about aggregate demand and supply. Imagine living in Yor, a tiny island-country, with only 1 neighbor. You sell pies for a living. Your neighbor, Jimmy, doesn’t work but receives a monthly stipend – from whom, you don’t know, nor do you ask. What matters is Jimmy loves your pies. He’s one of your 2 customers. Susan, an elderly lady in an island a swim away, is an occasional customer. 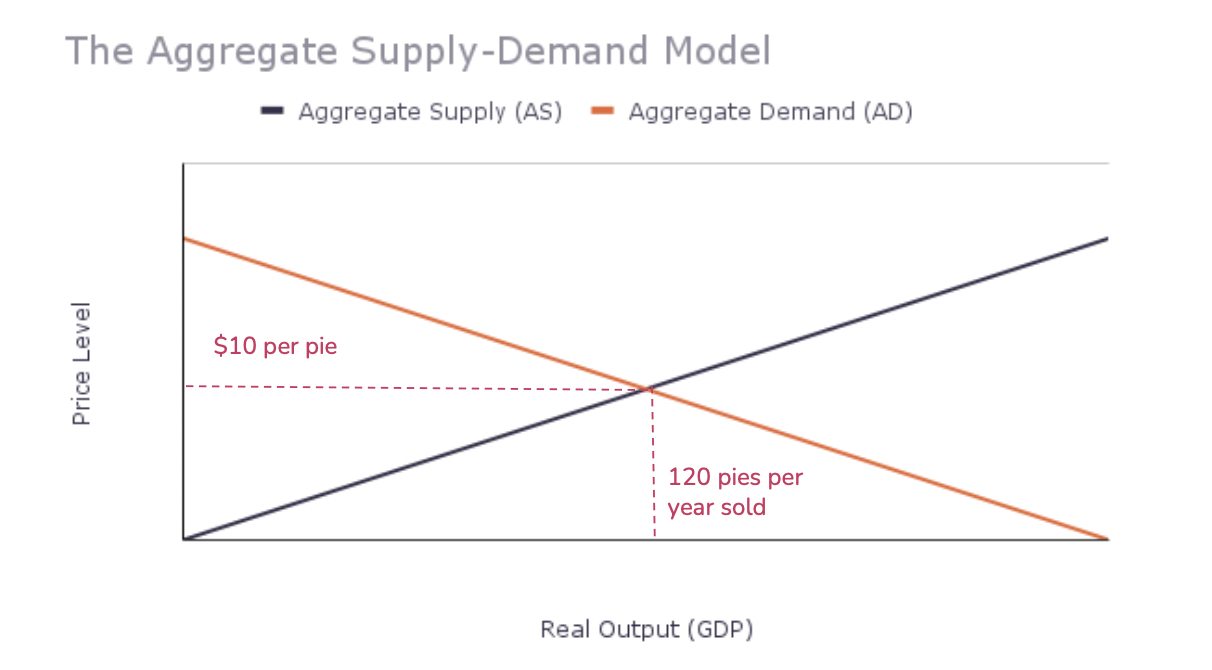 Every year, you make 120 pies, selling at $10 apiece. This year you decide to experiment, disturbing equilibrium by raising prices to $12. Demand moves along the aggregate demand (AD) line, down to 100 pies. Jimmy has a fixed income. At $12, he can afford fewer pies. And Susan? She decides to buy cake from another nearby island – they’re actually cheaper at $9 each. 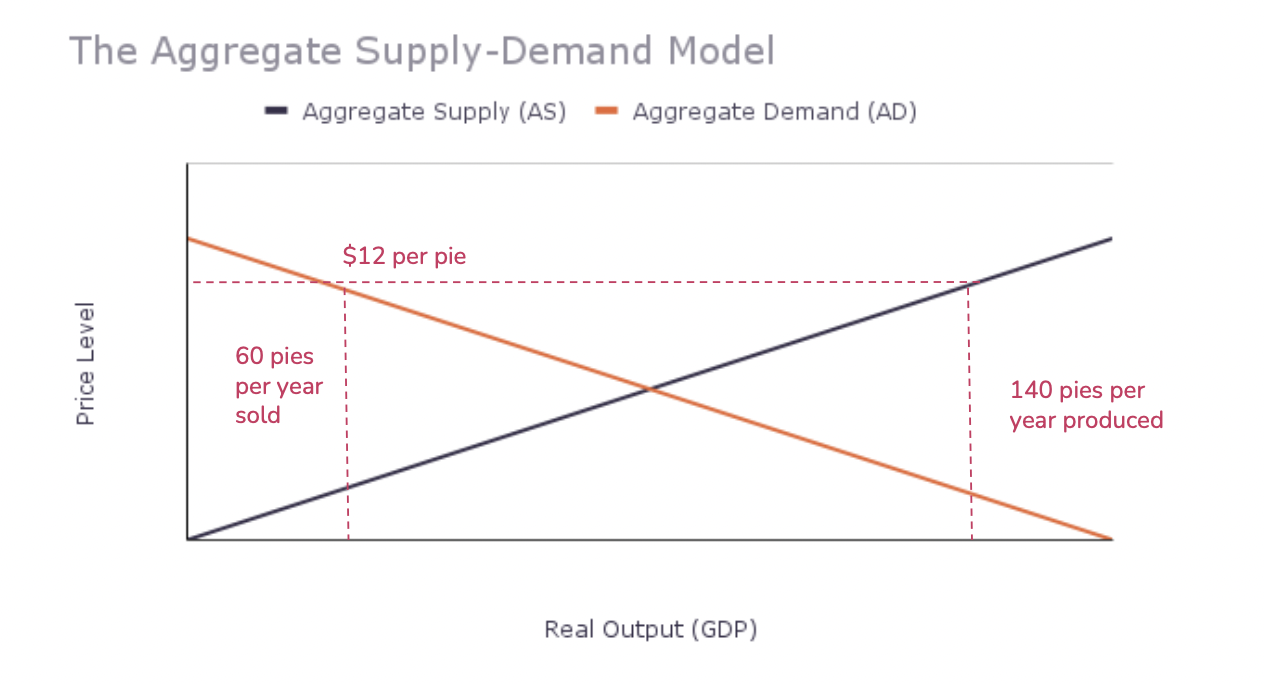 Higher prices net you more profit, so you slave away day and night to bake more pies. At $12 each, you want to produce 140 pies a year. The only problem? Demand has fallen, so some pies are left unsold – a surplus.

Why production is limited in the long run

You decide that maybe you could still produce more and sell more at $12 a pie, if only you could tap into new markets. Maybe the lady who sells Susan cake wants some pie for a change. She’s supposed to have a sweet tooth – and many kids to feed. 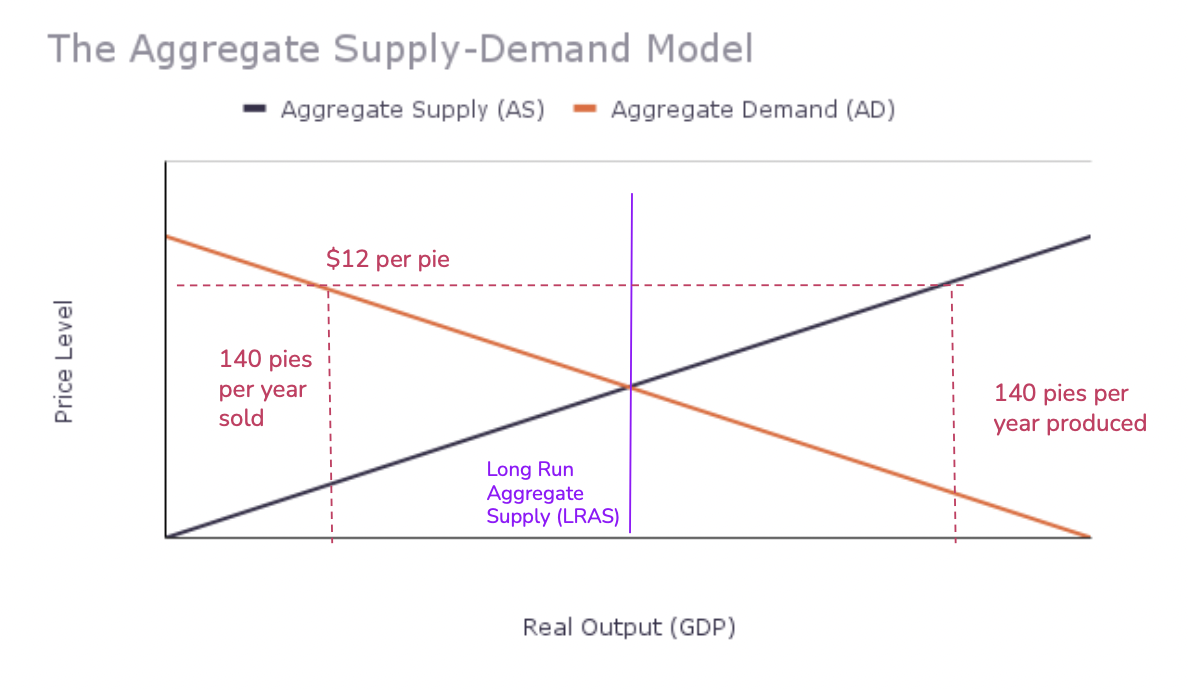 The thing is, you can only overwork yourself so much. Making 120 pies a year was a full-time job. At 140, you barely had any sleep. Any more than that, your oven might give up on you. That’s why, over the long run, you can only sustainably produce 120 pies per year. If you wanted to expand production, you’d have to invest in a bigger oven, hire another employee (maybe not Jimmy, he loves pie filling a little bit too much), or otherwise find a way to increase productivity.

This is why, as shown in the graph, long-run aggregate supply is a vertical line. It’s completely independent of price level. Rather, it is a function of other factors that dictate your production capacity.

Shocks, demand is up!

Suppose on your day off you visited neighboring islands to promote your pies. Good news, demand is up – way up! Economists call this change a positive demand shock. It pushes the aggregate demand (AD) line upward and to the right, as reflected by the red line in the graph. Here, the demand shift occurred due to an increase in export – remember, orders are coming in from other island-countries. 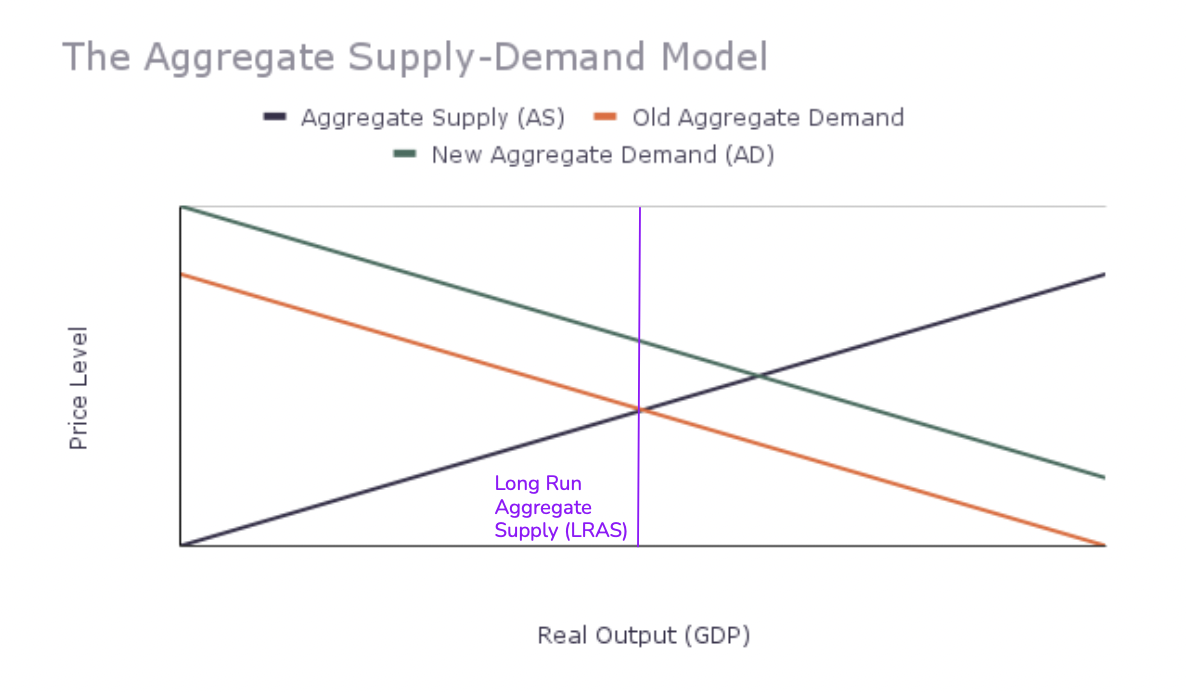 What else might shift aggregate demand? Maybe your neighbor Jimmy starts receiving a larger monthly stipend and wants to spend the extra money on more pies. Moving away from your tiny island-country and into a more traditional economy, aggregate demand increases when a government ramps up its spending or when businesses pump funds into new investments.

In contrast, higher income taxes or fear of an economic downturn would reduce an economy’s spending, because consumers have less to spend or are less willing to spend. They might choose to hold on to what they have now in anticipation of a tighter budget in the future. These changes will shift the AD line downward and to the left.

An economy on overdrive

What else happens when AD shifts? For the island-country of Yor, we see a new point of equilibrium for aggregate supply and aggregate demand – one that involves higher prices along with a higher level of production to meet increased demand. In the graph, we see this as point B. 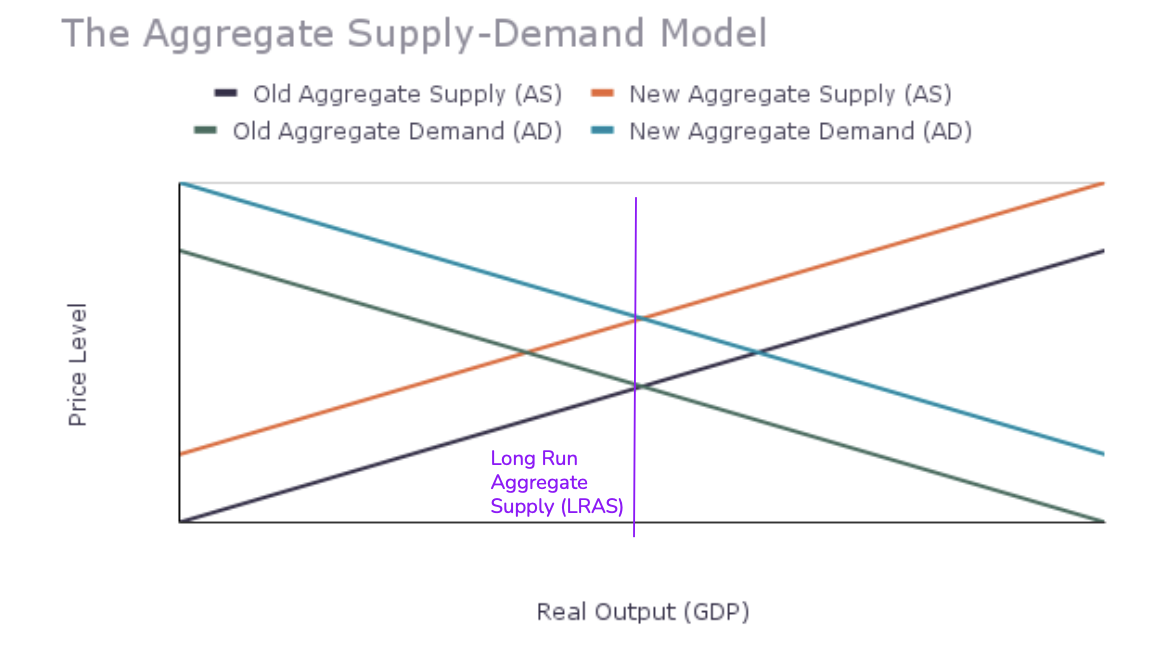 But remember that producing above Long-Run Aggregate Supply (LRAS) is not sustainable. When an economy produces beyond LRAS, it is said to be overheating or experiencing inflation. In your case, you’ll eventually face higher costs of production because you need to hire another employer or compensate yourself for working overtime. Prices will go further up, and, because prices have increased yet again, demand will drop.

In this scenario, the meeting point for aggregate supply and aggregate demand starts from point A, temporarily stops at point B, and finally stabilizes at point C in the graph. At the end of the day, prices will have gone up, but real output or quantity produced moves back to where it started.

The perils of a negative demand shift

Imagine that, instead of expanding, aggregate demand contracts. Jimmy’s monthly stipends have shrunk. Unfortunately, all his money goes to pies, so his spending cut impacts only you. With the AD curve shifting downward, equilibrium shifts from A to B. With less demand, production slows down and lands below full capacity. Economists call this a negative output gap or recessionary gap. 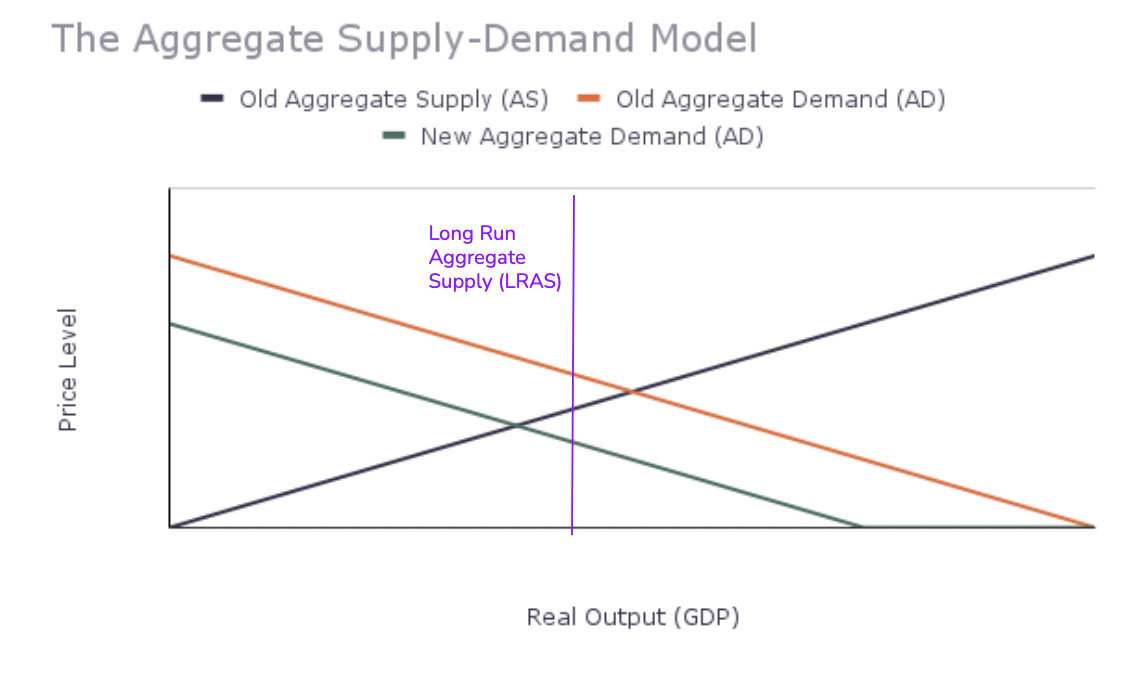 With revenue down, businesses must cut costs – maintaining the same level of expenses risks losing them money. Firms spend a lot on wages, but they can’t just cut workers’ pay. Wages are sticky – they don’t move down easily. Imagine receiving a pay cut. Wouldn’t you retaliate by slacking off at work?

Unable to cut wages, firms are forced to lay off workers. This can send an economy into a tailspin. Jobless people have little to spend, so aggregate demand will fall further, possibly resulting in more layoffs. The economy will eventually stabilize in the long run, but the adjustment process is slow. If the cycle isn’t disrupted, recession may drag on, so the government usually intervenes.

Oil, and other commodities

Shocks can also occur on the supply side. Take the 1970s oil crisis, when oil prices quadrupled[18]. Gasoline stations saw long lines of vehicles but had no gas to give. Businesses crippled by outrageous oil prices not only raised prices to remain competitive, their production also fell. 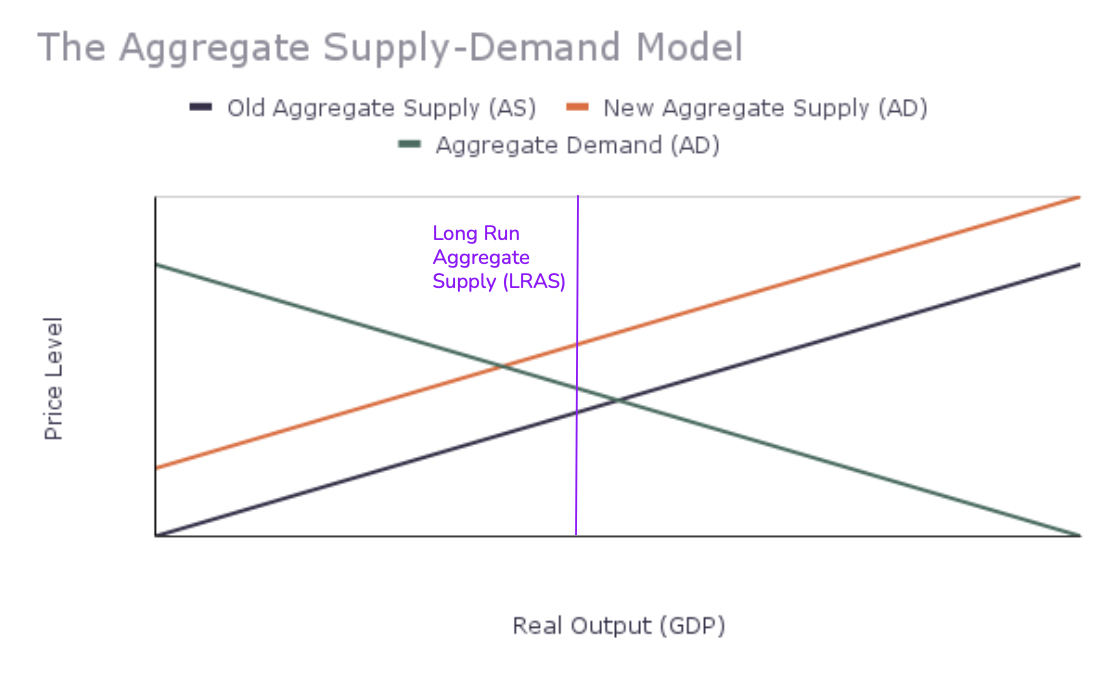 The graph above shows a negative supply shock. The aggregate supply (AS) curve shifts inward, with the new equilibrium (point B) below the economy’s potential GDP, represented by LRAS. This indicates that the economy is not operating at full potential. In effect, unemployment will increase.

Let it be… or not

No matter what shocks upset an economy, theory has it that production will always gravitate back to full output. Until they’ve reached equilibrium, markets will keep adjusting. To quote John Lennon, “Everything will be okay in the end. If it’s not okay, it’s not the end.” Why then is it important for governments to intervene when economies overheat or spiral down?

Left on its own, an economy experiencing inflation will see prices spin out of control, turning families’ hard-earned savings into dust. Saving money becomes meaningless, planning for the future is impossible.

Recessions can be just as bad – or worse – left unaddressed. During the Great Depression, unemployment rose above 20%. Families were displaced, and instability impeded on children’s education[19]. The impacts were long-lived. In 2008, the collapse of financial institutions hampered entrepreneurship and investment. When recessions are severe and drawn-out, social progress is set back, especially for low-income families. So, whereas things will be alright in the end, we can say that economic upheavals affect families differently. And so, this begs the question of whether interventions should be implemented, and at what point.

Macroeconomics, Government, Money, and You;

Meet the main characters of an economy, the roles they play, and their interactions with each other.